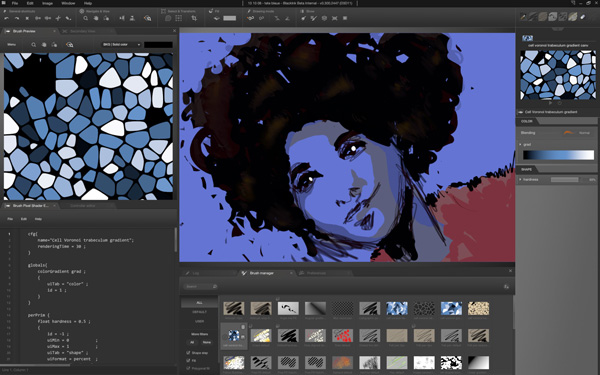 Called the Brush Shader Language, the editor extends the current customization tools, so that artists can program their brushes to control how they interact with the canvas. The result is a level of influence similar to the controls 3D artists have over looks and detail. David Toyou, lead programmer and co-founder of Bleank, talked to Digital Media World about the development of the new shader editor – plus other aspects of Black Ink 0.300 software. 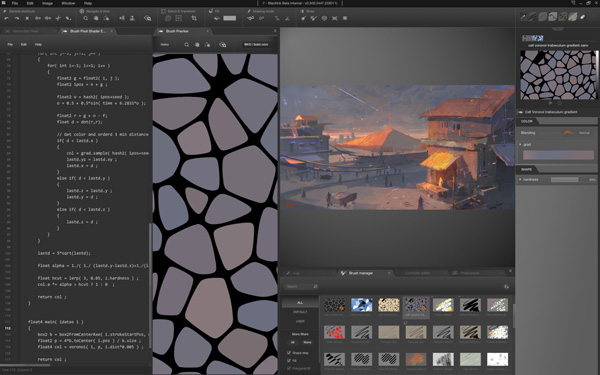 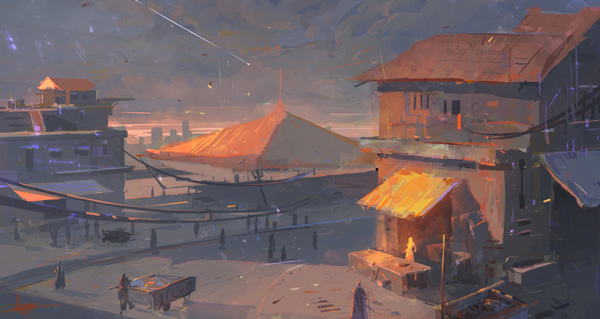 “Originally, Black Ink had a controller editor defining the means of controlling your predefined brush parameters. For example, for a smudge brush, you could define the strength of the smudge as a function of path length, pressure or drawing speed - or even a mixture of all of these. The new shader language, on the other hand, allows you to control every pixel of a brush to create further and more complex effects for it. Someone with a coding background can create smudges, generative patterns or 3D scenes with lighting.

“All of the brushes supplied with Black Ink are preset with their own shaders and controllers to make them simple to use, but because we also supply a lot of templates, it’s also easy to change every preset. By the way, the operation of switching and loading a controller on parameters has now been improved and is simpler.” 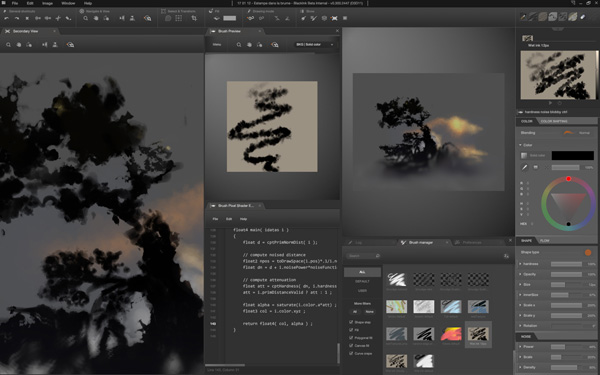 Developing the shader editor has actually required a lot of work, which is why only a simple text editor is available for it so far. But a node-based shader editor is likely to be added in the future, similar to those in the Unity and Unreal 3D game engines. “Some artists want to use sliders, others want to use code,” said David. “With Black Ink 0.300, each person will have everything they need to make their brushes as simple or as elaborate as they want.”

Other new tools in Black Ink 0.300 are a smudge effect that does not show lag on high-resolution images up to 10K. A new, large visualization panel will now preview brush edits in real-time. Colour parameters are improved to make colour manipulation more effective, through a colour wheel and the ability to reverse gradients.

Over ten new brush types are available including options for pen marks, canvas fills, ink droplets, blobby noise and more. Brushes can also be managed more easily with visual thumbnails, search tools and an adjustable design to make finding the right brush easier. You can see the new tools in action here. 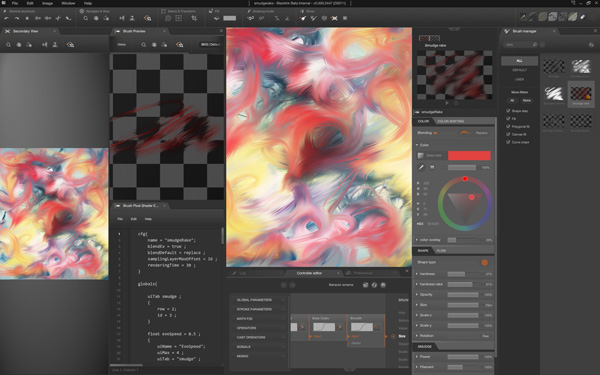 Programmers at Bleank believe that 3D software currently has an edge over typical drawing and painting applications for a few reasons. “We’ve noticed that professional 2D artists are fairly conservative with their tools and are looking for a sense of immediacy when working,” David said. “Unlike technical artists half-way between the 2D and 3D universes, they may resist stopping to learn a new technical tool.

”Also, the world of 3D has seen a lot of innovation in content production. Tools like XSI ICE in its time or Houdini today have made it possible to create very interesting effects procedurally. We regard the ability to write shaders for graphics cards as very important, too, because it gives a lot of control over brushes as well as high display performance and immediate feedback, saving time. An optimum GPU specification for Black Ink would be a dedicated graphics card with 3GB VRAM, like the NVIDIA 970 GTX. But it will also run smoothly on lower-end cards like the GTX 750 Ti and older cards.”

David said that Black Ink’s users are a mixture of concept artists hobbyists and, interestingly, independent developers using Black Ink to create textures and special effects for their projects. Most use a graphics tablet like the ones from Wacom or Huion, but Black Ink is also mouse-compatible because it can use path speed to simulate pen pressure. 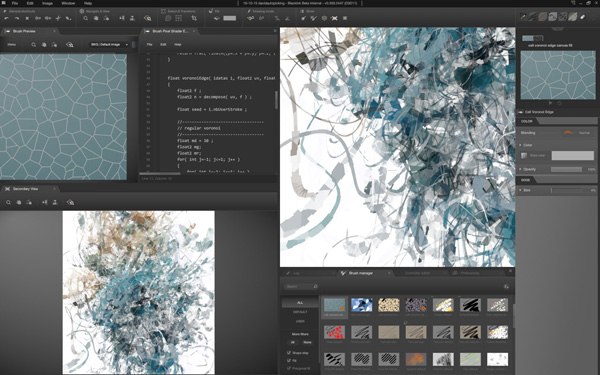 The software developers at Bleank are dedicated to the idea of generative art – that is, art that involves creating a process, such as procedural rules or programming, that can initiate or produce artwork almost autonomously – which is essentially what artists do when they customise brushes in Black Ink. David commented, “First and foremost, the name ‘Black Ink’ was inspired by the Rorschach test - a randomly created ink stain that is used to stimulate the imagination.

“We use the term generative art when speaking of Black Ink because our idea is that algorithms and procedural aspects should be used to support the creative process of artists by generating random or controlled graphic artefacts. We were first inspired by artist, designer and programmer Eric Natzke and others that developed Flash tools to generate impressive images. More recently, the ShaderToy community proved that shader programming was not confined to a small elite but that more and more developers managed to
harness the writing of shaders to create singular visualizations.”  www.bleank.com