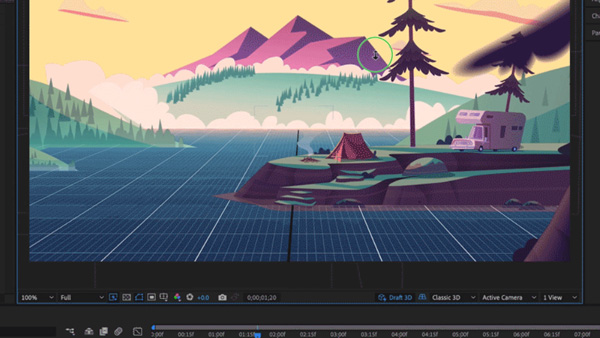 The Adobe 2021 releases of Premiere Pro version 15.0 and After Effects version 18.0 are now available. Premiere Pro v15.0 has new support for graphics functionality and cross application workflows, adding new tools like Captions in Premiere Pro and Media Replacement in Motion Graphics templates. Motion designers working in After Effects have a new real-time 3D rendering engine that generates instant feedback on 3D scenes in the Composition panel.

The new Captions workflow in Premiere Pro gives editors tools to stylise captions and subtitles in distinctive ways that add value to video and engage viewers. Captions are now integrated directly into editorial to speed up creation, connecting text with the timeline, and can be exported in all supported formats.

Users can start with an existing .srt transcript file, or manually type the captions in. Caption segments reside in a dedicated Captions Track on the Premiere Pro timeline, where they can be adjusted like other media using the editing tools. The text is edited in the new Text panel or directly on-screen in the Program Monitor. The look of the captions is stylised using the design tools in the Essential Graphics panel. 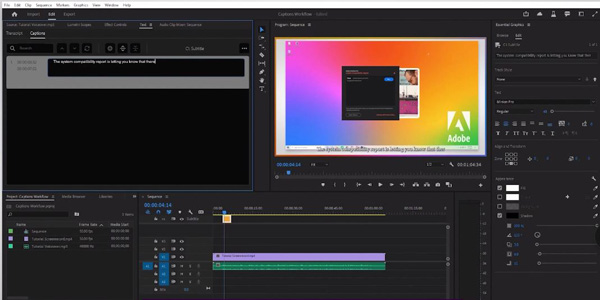 Captions are normally added when the edit is finished, fine-tuning and editing along with a caption track. When the video is ready, you can export the captions as burned-in, project-specific subtitles, a .srt sidecar text file or embedded in a QuickTime or MXF file.

Motion Graphics templates bring some of the functionality of After Effects onto the Premiere Pro timeline with customisable graphics and animations. With a new Media Replacement tool, you can now swap out specified media within a template, such as logos and video clips.

Motion Graphics templates are a quick way to to add customised graphics and animations to videos, and avoid having to build them from scratch because they give you the structure of an existing design and the opportunity to customise it according to the content.

After Effects users can author their templates to use in Premiere Pro, making them as complex as they like. Premiere Pro users can also create their own animations and graphics and save them as customisable templates. Alternatively, users can source professionally designed templates on Adobe Stock from inside Premiere Pro.

After you replace the media in the template, you can use the controls below the thumbnail in the Essential Graphics panel to adjust position, scale and rotation and to add a time offset to media, such as adjusting the start time of a video within the template.

You can either scale the media to fill the frame of the Media Replacement control without distortion by cropping, or by adding black bars at the sides sides. Otherwise the media can be stretched and distorted to completely fill the frame without cropping, or simply left as it is with the original resolution retained.

The Warp Stabilizer is now much faster due to improvements in the time it takes to analyse shaky footage although the actual stabilisation process and quality of the stabilisation is unchanged.

Premiere Pro includes audio plug-ins designed to alter or enhance the properties of audio clips. They are available for mono, stereo and 5.1 clips, and can be applied to clips or tracks. All audio effects are combined into a single, unified effect and displayed in a flat list inside the Audio Effects folder. When one of them is applied, Premiere Pro then automatically applies the correct effect type – Mono, Stereo or 5.1 – to that clip.

As in Premiere Pro, After Effects users can also create Motion Graphics templates that have replaceable media such as images and videos. Motion editors can use them in Premiere Pro to create complex graphics and animations with customisable parameters and swappable media. Multiple variations of a template can be generated using Essential Properties inside After Effects, swapping out different types of media for a series of outputs such as social media graphics, animated slideshows, brand templates containing a logo, or dynamic transitions between video clips.

Motion designers have a new real-time 3D rendering engine that generates instant feedback on 3D scenes in the Composition panel to help explore ideas more easily and iterate on a design more quickly. 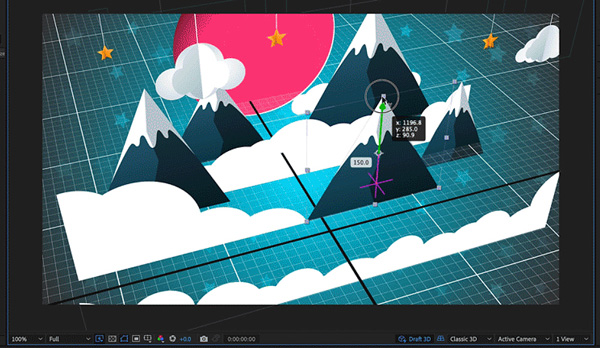 Unlike the older Fast Draft that was accessed via a series of dropdowns, Real-Time 3D Draft Preview can be accessed from a single Draft 3D button located on the composition toolbar. When you add 3D content to your composition, the 3D tools appear in the Composition panel toolbar. Using the Real-Time Engine speeds up play-back times for 3D projects, displaying feedback while working on your designs and limiting lag time for preview playback.

A part of the Draft 3D preview mode is the 3D Ground Plane that enables designers to orient their designs in space, supplying a horizon line and vanishing point. With a dedicated button that only appears when using Draft 3D, you can toggle a grid on and off for accurate orientation and use snapping to align objects in space or in relation to each other.

Due to updates to the Composition Toolbar, it is now possible to swap back and forth across 2D and 3D work by exposing the most-used composition tools based on context. This prevents having to constantly enable/disable a large number of settings as you switch. The updated Composition panel toolbar has been reorganised and displays options dynamically, based on the currently selected layer.  www.adobe.com