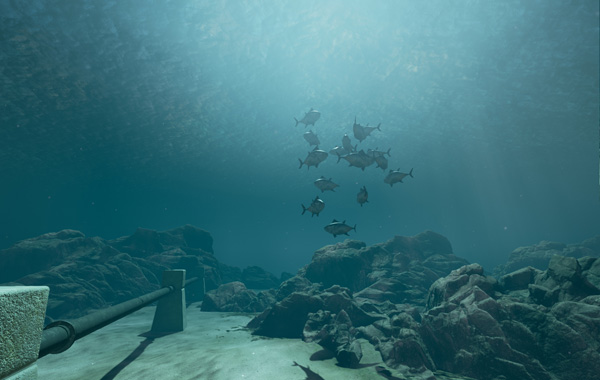 Deluxe VR and GE have been working on an interactive virtual reality experience called GE Store, illustrating how GE's various businesses share and support a large, diverse knowledge base that helps them develop new systems together. GE Store embodies the notion that GE's sum is greater than its parts and company-wide collaboration can benefit customers and investors through better products and services.

VR has turned out to be a medium that suits the GE Store experience especially well because it allows the company’s machinery and innovation to be captured and visualised in such an immersive way. Inside the experience, viewers choose among the disparate GE business units - Healthcare, Oil & Gas, Energy Connection, Transportation, Digital, Renewable Energy, Global Research Center or Aviation - to see how they collaborate and the results they achieve. 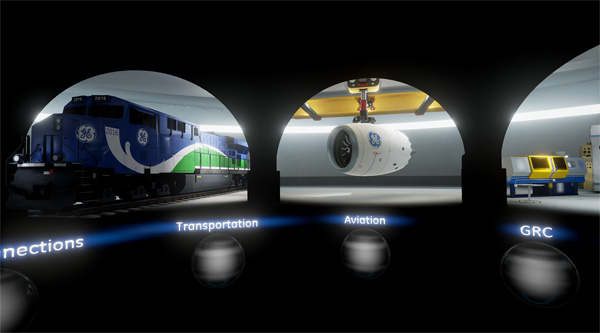 For instance, connecting Healthcare with Oil & Gas transports users to the ocean floor and shows how GE is using their own systems to improve underwater crude oil pipelines – medical ultrasound techniques originally developed by GE Healthcare have been repurposed by GE Oil & Gas to scan subsea oil pipelines for predictive maintenance. The overall experience is a close-up exploration of equipment and environments that viewers might not otherwise be exposed to, such as wind turbines or the inside of a jet engine.

This fusion of two divisions’ creative thinking and engineering is represented in the navigation scheme of the experience. Creative director Alex Stein described it. “All around the user are blue spheres. Each sphere represents a GE division. By picking up two spheres, bringing them together and merging them manually, the user describes the combination of abstract forces in an allegorical and interactive way. Once two spheres have been combined, an interactive story plays out around the user describing the results of their collaboration.”

Recognising that VR would be the most effective way to bring the project’s abstract ideas to life, GE wanted to push the medium beyond its usual boundaries. Briefed on the synergies and collaborations they wanted to include in the GE Store, the Deluxe VR team’s approach was first to identify interactions that would reveal where GE’s divisions intersect and then design compelling visuals to drive the experience. To make sure that viewers could navigate the virtual environment easily enough, refining the interface was another focus.

“The process required some trial and error because we wanted to make the navigation and interactivity of the experience as intuitive and simple as possible, while also being fun and engaging,” Alex said. “Our goal was to make the user feel like he or she is the one combining materials, contributing to the solution and controlling the experience. 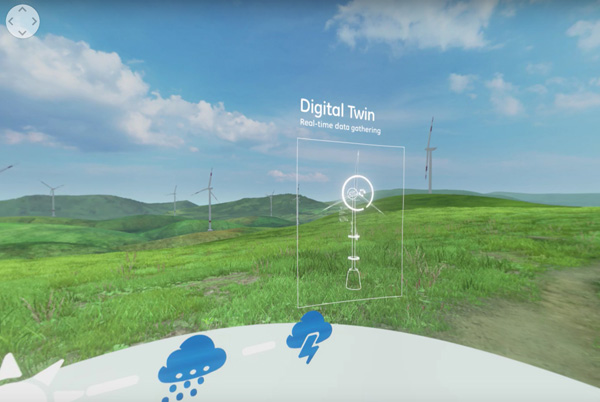 “We started with very basic tools to help us identify the space and the layout of the experience, and sketched the main UI in VR so that we could quickly test how well our ideas would work in a VR space. That helped us understand what was comfortable in terms of navigation tools and what felt natural for human interaction. Also, we designed the experience so users actually have to move a bit, making them feel more involved and immersed and encouraging exploration.”

Teams of artists researched each business unit in detail to flesh out concepts and storylines, and modelled the CG assets, either building new 3D models based on real GE machinery, or modifying existing high-res assets supplied from GE to run at the necessary frame rate for VR.

Juan Gomez, as real-time CG supervisor explained some production and rendering considerations. “You need at least 90 fps for VR, so the computer needs to generate a lot of data, very fast,” he said. “The greater the level of interactivity and the higher the image quality, of course, the more you start demanding from the computer, so we had to modify our game engine to allow us to generate a higher quality image faster. We used the Unreal Engine on this project, designed for interactions. Finding good engine performance is one of the biggest challenges you encounter when creating a VR experience. 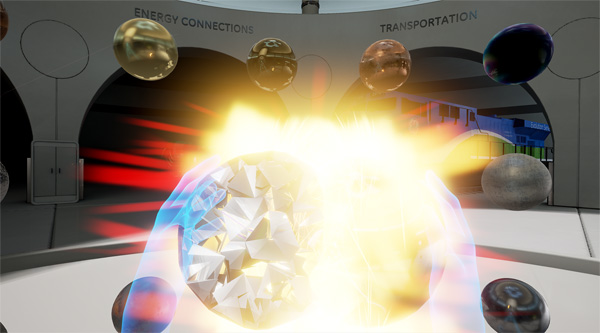 “On this project the user experiences several natural environments - underwater, outer space, up in the sky. During development, each one came with specific challenges. The more details you add, the more real the experience will feel. For example, at one point in the GE Store, the user is in the middle of a wind-farm environment with grass and turbines that move with the wind.

Change in the Weather

“As users change the weather, we see the grass and wind turbines moving faster. Rain starts to fall, they experience thunder and the whole environment changes to make them feel they are surrounded by a thunder storm. That ability to change the weather at will demands a real time response from the engine.”

The details quickly add up and require substantial computing power, affecting the game engine performance and quality. Therefore, the producers aim to optimize and simplify tasks for the engine. New functionality in the NVIDIA video card drivers helped increase visual fidelity, performance and responsiveness. The artists also needed to develop some new anti-aliasing tools, and experiment with new hardware and software to meet the desired performance levels. 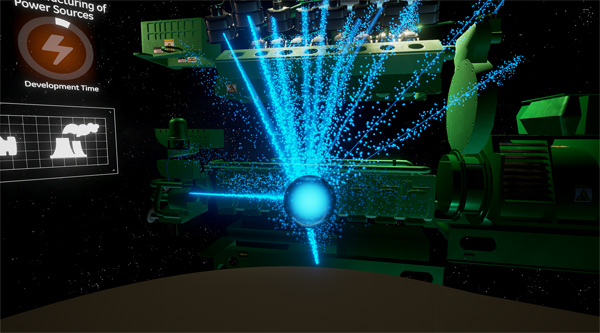 “In VR, sometimes objects or textures can appear blurred with ghosting or shimmering artefacts due to anti-aliasing, which this can bother your eyes.  Obviuosly, since we always want to make VR experiences as pleasant as possible we identified the situations that introduce those artefacts and developed different techniques that help address each of one.

As a company that is recognised for innovation, GE has wanted to make VR part of its public message for some time. Through a sound understanding of what the medium can do and by working with a company like Deluxe VR, they have been able to design an experience and visual language to tell their stories.  www.bydeluxe.com