Flaunt Takes The Famous Grouse Home for the Holidays

Flaunt Takes The Famous Grouse Home for the Holidays

Flaunt Productions bring life and humour to a holiday campaign for classic Scotch whisky, The Famous Grouse, with a brilliant feather system and a flight through the Scottish Highlands. Created with the Leith Agency, the campaign consists of two 20 second ads led by director Ben Craig and head of lighting Jon Neill who have taken the grouse from his usual position on a stylised white label and placed him in a CG cinematic version of his natural environment.

The first spot, titled ‘Perfectly Balanced’, released in early November 2016 and travels through the expansive Scottish Highlands to reveal the Grouse – proudly overlooking the scene, chest puffed out. The second commercial, ‘Smooth’, aired later in the month. The scene opens as the camera spins through a dazzling snowy Scottish landscape. As the name suggests, as the camera pulls out, the Grouse smoothly spins across a frozen lake on top of a curling stone.

The scenery and animation are brought together with dramatic orchestra music until the Grouse is revealed, performing with a touch of humour - a combination that brings charm and personality to the campaign. Andrew Pearce, executive producer at Flaunt Productions, talked to Digital Media World about aspects of the project and explained some the techniques the team employed.

To create the cinematic photoreal landscape, Jon Neill and members of the team shot drone footage in Glencoe, a glen of volcanic rock up in the Highlands, giving them the opportunity to capture and use real life textures within their CG world. But what is perhaps most exciting are the camera moves at the start of both ads. On ‘Balanced’, the camera feels more like a rollercoaster as it passes over and through kilometres of spectacular countryside, and in Smooth, the entire 360 view is created to make the audience feel they are there, spinning with the Grouse. 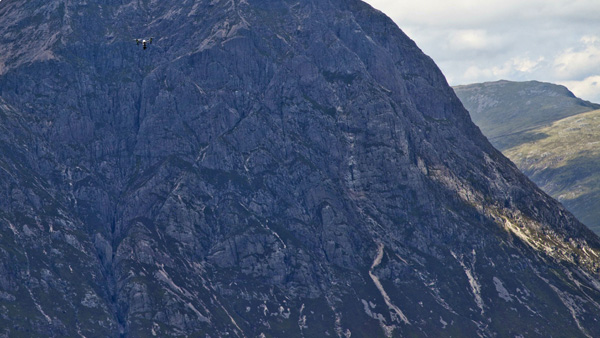 Andrew said, “We used the drone to take overlapping stills at three different heights. We then merged the images together to create a 360 panorama, and applied this to geometry in Maya, building simple 3D hills on which to project the images. From there we could render out the shot with this background, making creative decisions on what to add or take away. But from this point, the approaches needed to be quite different for the two spots.

”In ‘Perfectly Balanced’ the cameras originally came from 2D concepts of Scottish mountains, which we worked up into initial proxy geometries and then guided the camera over these. As the production developed and the camera was edited, we defined exactly where the geo would appear close to the camera, and chose some key dramatic moments. Then, towards the end when the camera was locked off, we added and refined the geometry at those chosen moments to increase the sense of movement and excitement.”

Going for a Spin

By contrast, the camera motion for ‘Smooth’ was defined by the Grouse’s performance. Here, the 360 camera moves are less about showing off the landscape, and instead are based on how he turns around on the curling stone. The scenery therefore is used mainly as a backdrop. The team did follow the same pipeline process to create the landscape but it required less direct choreography of the camera.

Describing their realisation of the natural environment, Andrew said, “The director Ben Craig’s vision for the commercials was to put the Grouse in a quintessential Scotland. It had to be real enough to be both recognisable and believable, but augmented to maximise the beauty, as though we were creating landscape painting.

Artists pushed the geography, colours, atmospherics, tone and mood to achieve this. Our biggest artistic change to the geography was to bring The Isle of Skye’s Innaccesible Pinnacle to Glencoe. But much of the work was subtle, with attention to realistic details. 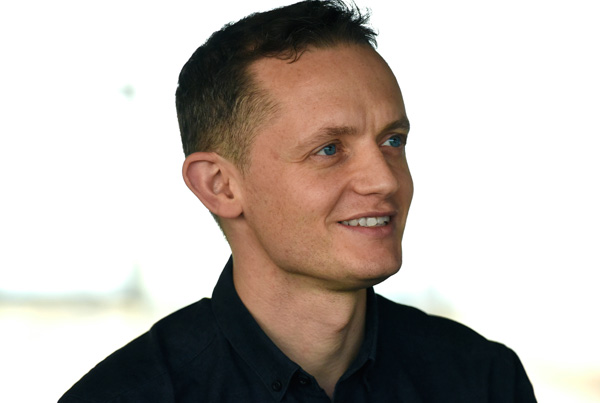 We laid out geometry to match the reference footage we had shot from the drone in the Scottish Highlands to get real textures of hills, rocks and sky. We also aimed to keep the lighting direction consistent. Once we had a full 360 layout we chose real images of clouds and layered them onto cards, to create the feeling of flying through them. We even looked at helicopter footage flying through and over the highlands, taking inspiration from the way the camera racked focus and adjusted exposure as lighting conditions changed.”

In order to create a realistic Grouse, Flaunt developed a feather system based on fur and a procedural shader that gave a life-like, natural look to the model.  When it came to setting the body and wing feathers in motion, specific movements had to be animated to give a sense of realistic movement add the personality that is associated with the Grouse. After all, birds need to really use their feathers to fly - they don't remain motionless on the creature, but also don't move randomly like hair.

Andrew said, “For the sizes and colours we chose to go for a more procedural workflow. That meant that each feather was treated as unique, with its own shape and colour, in a similar way to our approach for fur. To control these thousands of feathers, we needed to direct the main procedural shader. We did so by creating various maps. Combining these, with some randomness, gave us control over feather size, how many stripes they should have, how ‘broken’ they should be, colour of tips, flexibility, how they should move and so on.”

The movement of the feathers, on the other hand, was a mix of simulation and hand animation. We created two set-ups. The first created feathers from animated geometry, the second filled the body with feathers procedurally.

“The reason we split it in two systems was because we wanted to give the animators a good amount of freedom rather than solely depending on simulations, which are usually less convenient for art direction,” said Andrew.

“So for the larger more expressive wing feathers, the animators had full control of each one’s movement. Opening the wings, spreading the feathers apart, bending them and even applying a procedural wind motion – it was all up to the animator.  Our rigging department created fantastic rigs that included lots of controls, without overwhelming the animators, who had about 100 feathers to control. After animation sign off, we converted the feather geometry into the fur with a bespoke tool, providing a smooth transition from wings to body feathers.”

The body feathers took a different approach. Once they were procedurally created, the artists decided to let them move just a little, following the body movement and not flapping around too much. “It was important to director and client that we kept a smooth and elegant silhouette of the bird,” Andrew noted.   www.flauntproductions.com