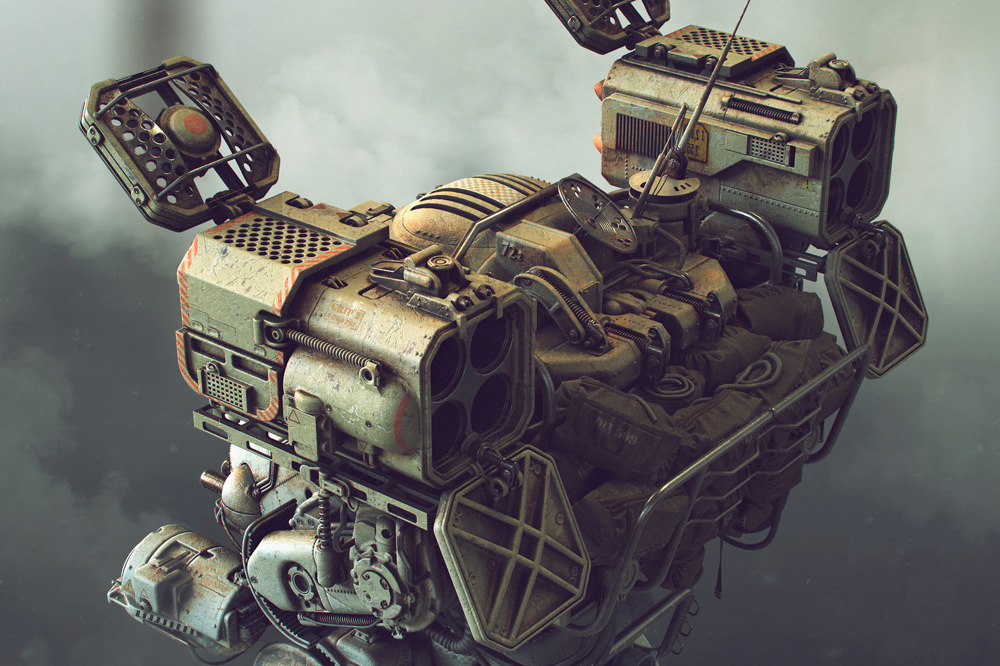 The Foundry MODO 10.1 has a new nondestructive procedural modelling workflow and system that works alongside MODO’s direct modelling and MeshFusion Boolean tools.

As they are procedural, the new functions make it possible to iterate effectively through the ability to manipulate modelling operations at any time, in a flexible layer stack. Each successive mesh operation—such as Bevel, Extrude, Merge, Reduce and Thicken—is added as a layer to the stack, which you can modify, reorder, disable or delete at any time. The state of the mesh can be viewed at any point in the stack, with future operations shown ghosted, or the stack can be frozen up to any chosen point to improve performance. 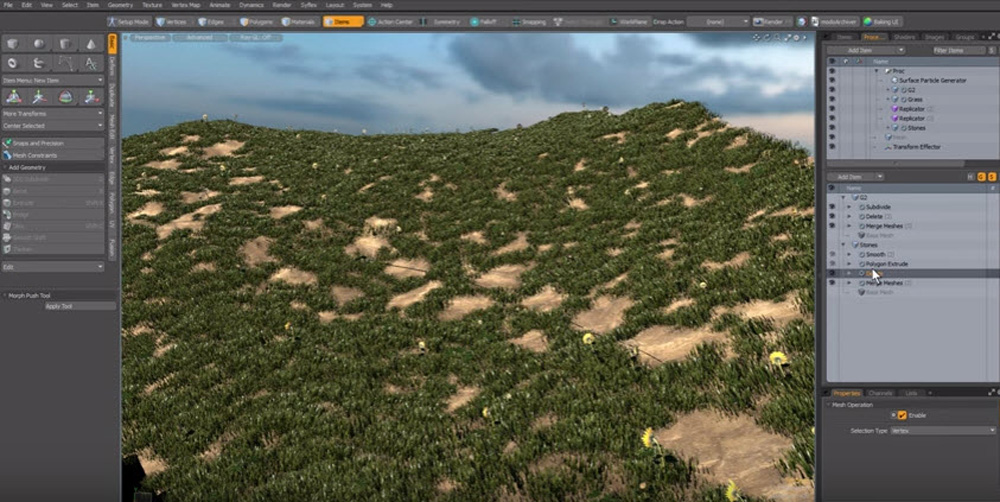 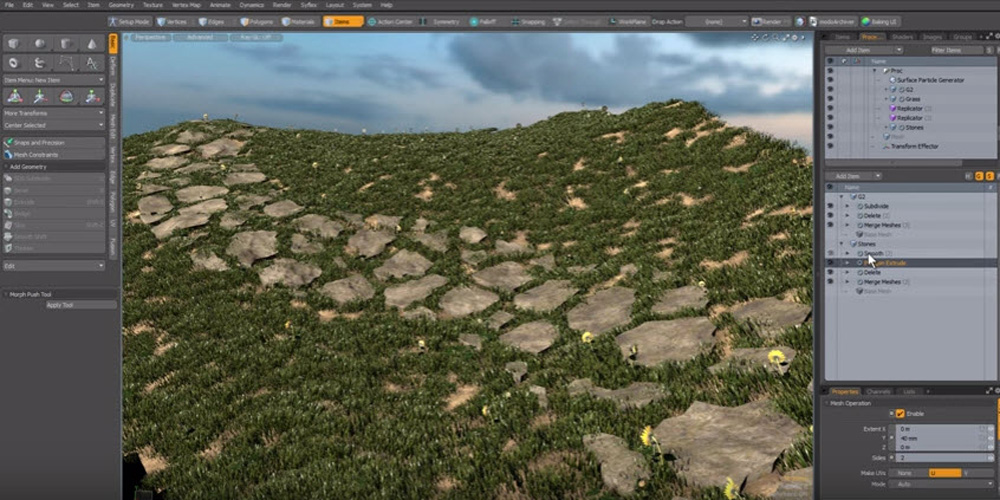 Users control which mesh elements are affected by subsequent operations in the procedural stack through selection operations. By default, selected elements are automatically added to a Select By Index operation, to which you can add or remove elements at any time. You can also define other operations to select elements procedurally.

Some operations allow selections to be rigged, animated and dynamically updated as the input mesh changes. Alternatively, the user can drive procedural operations with textures, falloffs or by dynamically changing inputs to support a nearly infinite number of variations, and edit selections and swap out input meshes for further changes to the results.

To animate parameters within the stack, falloffs can be used to modulate the behaviour of tools within the stack. The placement of the falloffs can also be animated for more effects. For example, it is possible to modulate the effect of a direct or procedural tool or deformer using a textured falloff, in which the textures are connected to the falloff directly in the schematic or in the mesh operation stack.

Using MODO’s procedural system to create a style for a piece of 3D text - changing thickness or adding offsets, for example – is controlled by changing the input string or the font to create new, specific variations. Text can be rigged in the schematic view, allowing the source text to be driven and dynamically changed. The Text tool will also directly output Bézier curves to drive a new Curve Fill operation, generating an all-quad mesh.

New curve tools, constraints, deformers and enhancements to the MeshFusion toolset are other modelling updates to MODO 10.1.

Regarding curves, B-Splines are now an alternative to Bézier curves in MODO, with the procedural Curve Fill operation mentioned above that allows a closed curve to fill with quads. The Curve Particle Generator is used create and adjust duplicated geometry along curves, Curve Rebuild resamples a curve into an evenly spaced set of points and Lacing Geometry extrudes a profile shape along a guided curve.

The MeshFusion Boolean modelling tools have better control over mesh topology and density for individual strips. Users can create, edit and analyze simple Fusion models in the schematic more easily with extended support for drag-and-drop editing, and placement options now include placing and fusing multiple copies of preset meshes. Procedurally modelled meshes can be used as inputs to MeshFusion. 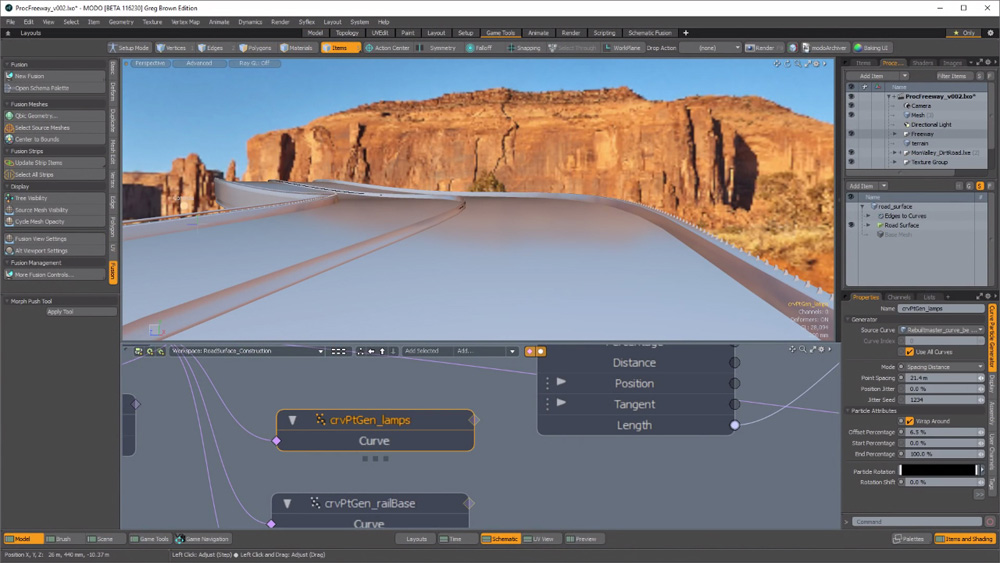 A new UV Transform operation makes 2D shapes accurately conform to 3D meshes, and UV Constraint will constrain the position and rotation of objects to an arbitrary position on a 3D surface. The Push Influence deformer pushes geometry along its surface normal.

MODO 10.1 is the second instalment of three in the MODO 10 Series. Customers buying the MODO 10 Series receive all three instalments as they become available, including MODO 10.0 itself, recently released with new workflows for creating real-time content for games and supporting other immersive, interactive experiences like virtual reality.  modo.thefoundry.co.uk