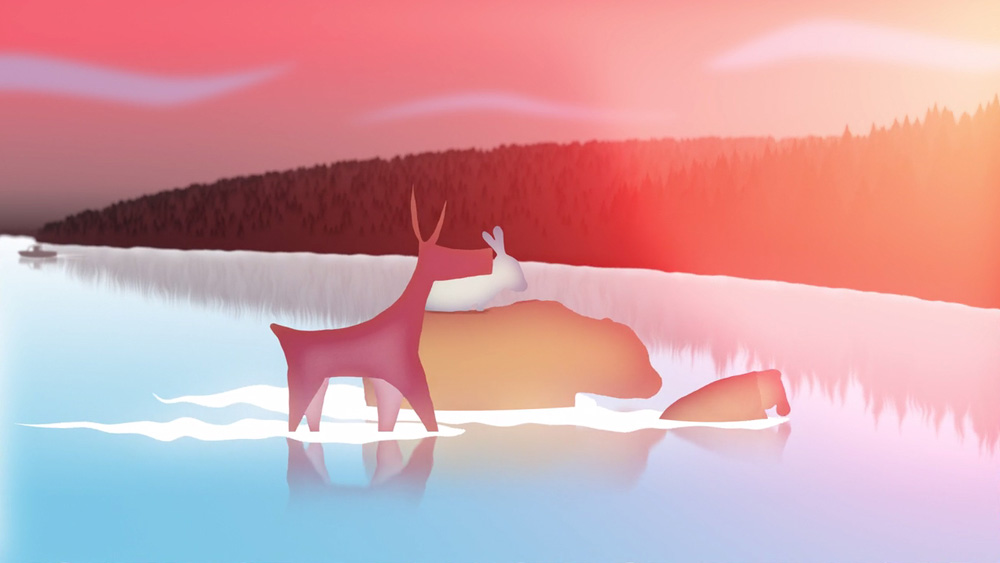 UK band Steve Puddle and his Bivouac Band released an animated music video for a song titled ‘Cold Hearted Land’ from their new album in early March 2016, just ahead of the album’s release on 21 March. The artist is Tom Munday a freelance animator and motion graphics artist whose clients include the BBC, ITV, Film4, Red Cross, Fairtrade Foundation and The Guardian. But on this project, the fact that he also plays guitar in the Bivouac band gave him a special motivation and source of inspiration.

“Because I play guitar in the band, I was very familiar with the song before I started a video for it,” Tom said. “Whenever we start working on a new song it tends to stick in my head and make various visual connections before I’m even aware of them. In ‘Cold Hearted Land’, a languorous tread to the guitar line combines with a world-weariness in the lyrics. It immediately felt like a journey, made by necessity, on which the protagonists ardrawn towards some end goal.You can see the video below . Below, Tom describes the design, development and animation.

Apart from the music itself, Tom has always been interested in how movement can communicate in its own right. A long time ago he saw a piece of video art featuring two lights carried by a dancer, and noted how just those two dots alone on the screen could convey the full sense of the choreography. Likewise, the animals in this story are simple in design but he aimed to convey their character through accurately recreating their movements, instead of going for a more complex creature design and rigging. 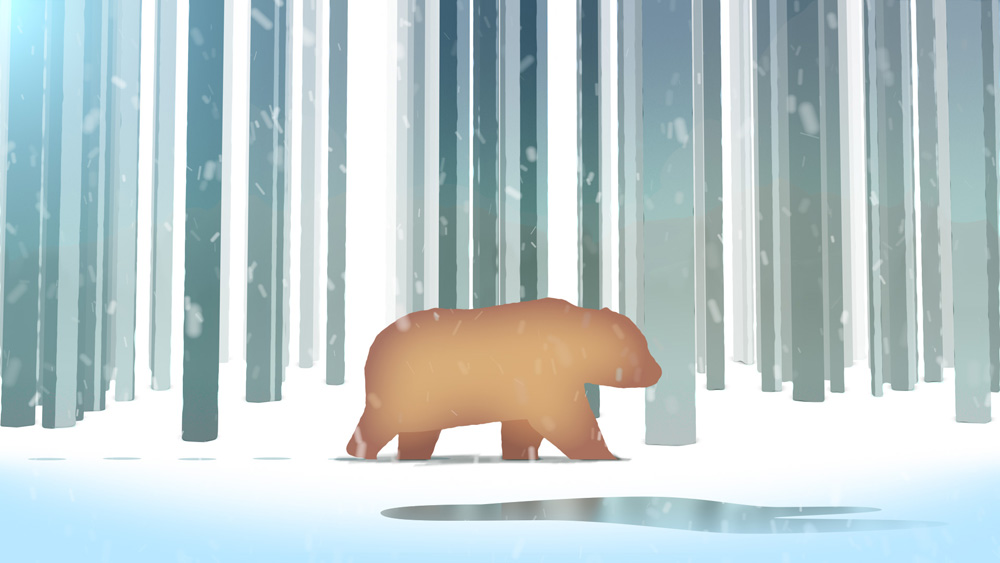 The overall design is based on 2D animals within a 3D environment, a 2D/3D hybrid approach. “One of my favourite films is Sylvain Chomet’s ‘Belleville Rendez-vous’ [The Triplets of Belleville] which I first saw fairly early on in my animation career,” said Tom. “That film makes incredible use of this technique, in particular in the scene of the pedalo crossing the ocean. I can’t claim to have caught the drama of that, but I like the challenge of mixing these two worlds without letting them jar stylistically.” 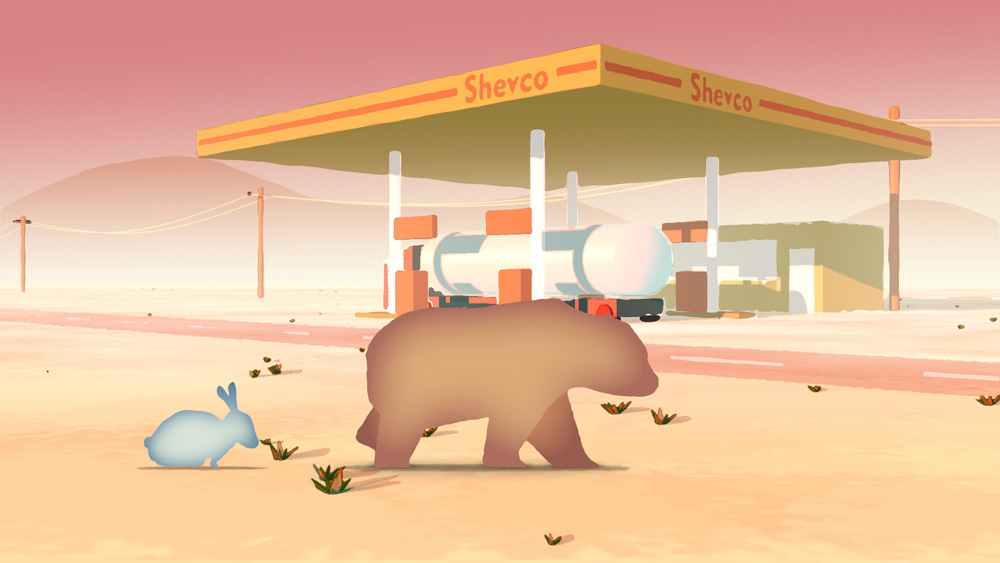 Although each creature’s moves are confined to walking along at an even pace, the motion is distinctively like a bear, rabbit, monkey and deer. For each animal, Tom watched a lot of Youtube and Vimeo videos, finding out as he studied them that animals don’t always look or move as he originally thought they do. The animals began as drawings made by hand that were scanned, brought into Photoshop and converted to outlines. Then they were brought into After Effects to create 10fps loops.

“The animation was pretty much all done in After Effects,” Tom said. “The only 3D animation would have been the camera moving through the scene. The rigging is extremely simple. Some of the frames are hand drawn, in other places I have a very simple hierarchy of legs attached to body. The deer, for example, works a bit more along these lines. But my ambition was to work on these animal loops on a frame by frame basis which negated any need for rigging in most places. If the leg wasn’t in quite the right place I’d just redraw the shape, rather than use any form of rigging, and slowly fine tune each loop.” 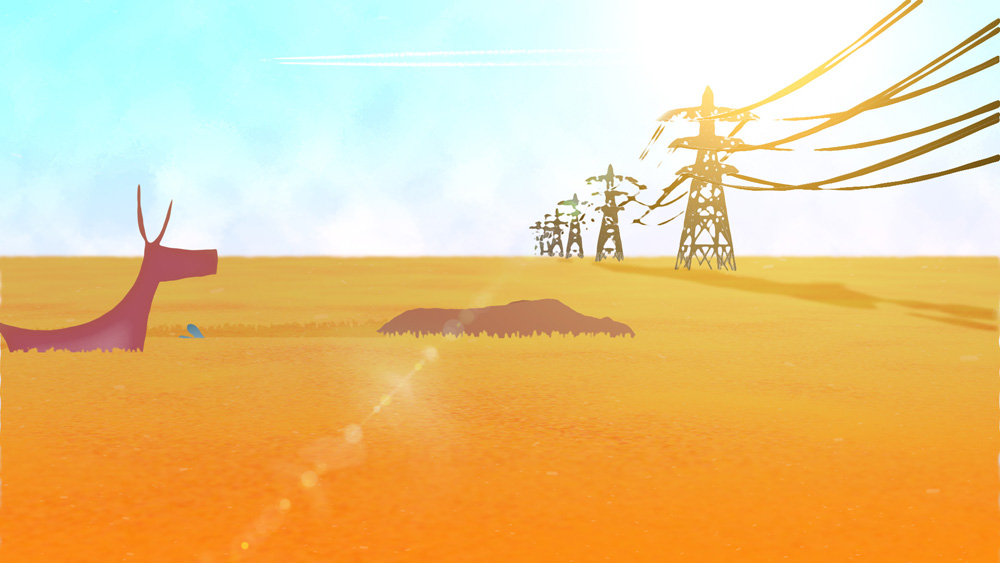 The animals are essentially completely flat with just a bit of shading in places to separate back legs from front legs. In this case, it’s the animation and weight of their movements that Tom has used to make them feel that they have volume, whereas in the backgrounds it is the perspective and parallax that comes with 3D that gives the sense of realism, despite their simplicity in terms of colour and shading.

He noted, “In some ways it’s really come about as a product of pragmatism – this method allows the attention to detail and frame by frame animation of the animals but keeps the depth and scale of the 3D backgrounds, while still being able to control everything through composition.

Given the simplicity of the characters, camera and animation, the changes in the environments and lights are essential to telling the story. He said, “The timing of the scene changes was largely led by the music – even though it’s a slow film by nature and I was conscious of spending too long in any one environment, the natural structure of the song indicated when these should shift. I also wanted the sharp sudden scene changes to express the longevity of the journey and keep the constant movement going – the animals are constant even as the world changes around them. 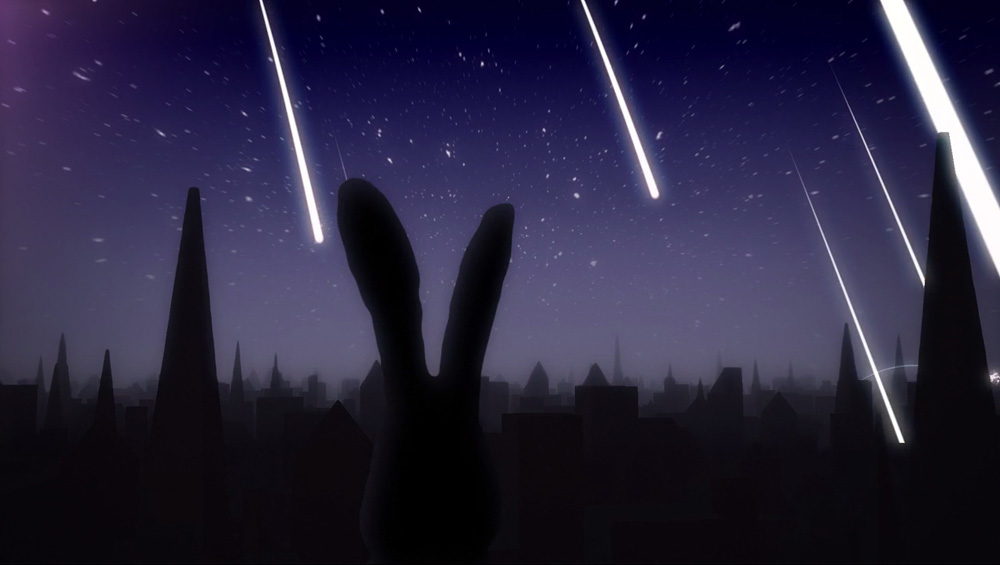 “The environments were mostly built in Cinema 4D and then brought into After Effects to be supplemented with some 2D elements, combined and grunged-up a bit. In fact, the 3D layers didn’t even have anti-aliasing applied to them as I knew it would be irrelevant once I’d messed with them in 2D.”

The atmospherics and camera effects are the result of a combination of effects working in each scene. Each 3D background element, and even each shade within that element, was brought into the scene as a separate layer, which meant that everything could be controlled in compositing. A lot of the effects elements you see used plugins as a base and then were tweaked and adjusted to get the final effect.

“Snow and rain, for example, are straight stock After Effects plugins, with a bit of Trapcode Particular for the final streaks coming from the sky, the smoke effects and the stars. Texturing all happened in After Effects as well, because the 3D came out as flat layers. Where there is texturing, it’s nearly all procedural, involving fractal noises or layer styles,” said Tom. 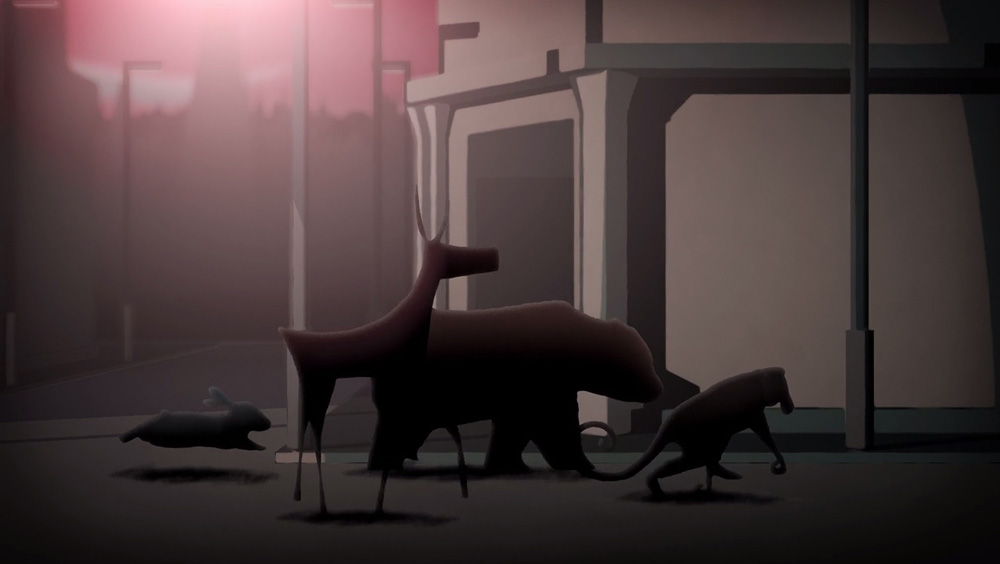 “Much of the lighting comes from Knoll Light Factory or just applied 2D gradients. Even where I’ve used Light Factory, it mainly comes from very large, off-screen glows that give a sense of light.”

A major influence on the look of the project came in the compositing stage – the animals are always the focal point but there are key elements in the background that are intended to convey a bit more thought to the story, particularly on the theme of journeys. Depth of field, and even more so depth of light or fog, helped to bring all the elements together. At the same time, however, these qualities kept the elements separate by providing a sense of perspective and preventing the film from becoming too flat.

“My very first experience in animation was in 3D, but I quickly realised that I found working in 2D and using it to give impressions of space and weight much more liberating and exciting,” Tom said. “When I do use 3D, I generally like it to have a 2D aesthetic, either through simple shading or rotoscoping, or by separating out the layers as I have done with this film. Hopefully, ‘Cold Hearted Land’ shows how these aesthetics can combine to create a singular, interesting aesthetic.”  tommunday.com