The Sequence Group Animates 'The Billabong'

The Sequence Group Animates 'The Billabong'

The Sequence Group in Melbourne produced over 20 minutes of abstract animations and motion graphics that capture the mystery and spirit of the landscape of Central Queensland in Australia. Their work forms the heart of a large immersive art installation called 'The Billabong' at the new Waltzing Matilda Museum in Winton, Queensland, and has been entered into the AEAF Awards. With Digital Media World, Creative Director Luke Bicevskis, who was a speaker at AEAF's Speaker Program in 2017, talked about the design and development, processes and production of this project at The Sequence Group.

Melbourne's Arterial Design studio successfully tendered in 2017 to produce this exhibition for the museum, developing the concept to effectively representing a place for local stories that has rapidly become the centrepiece of the exhibition space. Arterial’s creative director Jan Nowell said, "The stories developed over time. With many community consultations and visits to the site we were able to engage with the place and its people. Slowly we got a sense of what made this land unique and were able to start bringing these stories to life." 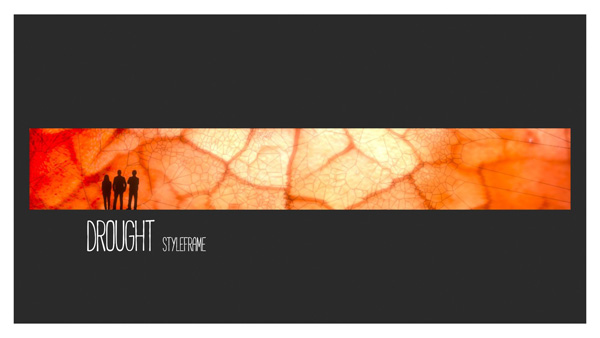 The physical Billabong installation, where projections of the imagery and graphics visualising the stories, is a 4m high curtain made of very slim, flexible silicone tubes. It was designed and developed by Nick Lawson, Arterial's Senior Designer and Project Manager, who chose the material for its ability to carry light from the exterior, where the images are projected, and radiate it through to the interior space the curtain curves around. The shiny, reflective ceiling and floor help extend the light and colour of the imagery well beyond the 4m high tube curtain. The objective was to produce an immersive visitor experience that evokes some of the feeling of visiting the Winton region.

Once the structural design was underway, Arterial had to find an animation company that could capture Jan’s vision with the same artistic and emotional impact she envisioned. Jan said, "The images and the treatment of the images were, in fact, just based on mental concepts – they needed to refer to reality, but then break down and transcend the real elements to capture their magical qualities and power in the process. Translating these ideas into the final visualisation called for a specific understanding, and was not easy.

"We interviewed many companies and tested out visual responses from a few. There are some excellent animators in Melbourne, which made the decision tough, but the day we met Luke Bicevskis and Melissa Benavides in our studio, sparks flew. Although I had a very clear vision, I was looking for creativity in a team that could both capture that and bring their own edge as well. Luke and his artists were the ones."

Lead by Luke, The Sequence Group team combined 2D, 3D and traditional animation techniques to achieve a balance between visual abstraction and narrative. Arterial’s concept for The Billabong meant they needed to consider new technical and physical approaches to the animation. Luke said, "Arterial had spent a considerable amount of time working with the Winton community to develop a concept that captures the beauty of the land that Banjo Patterson conveyed so perfectly in his poetry. We felt a great responsibility to realise this vision.” 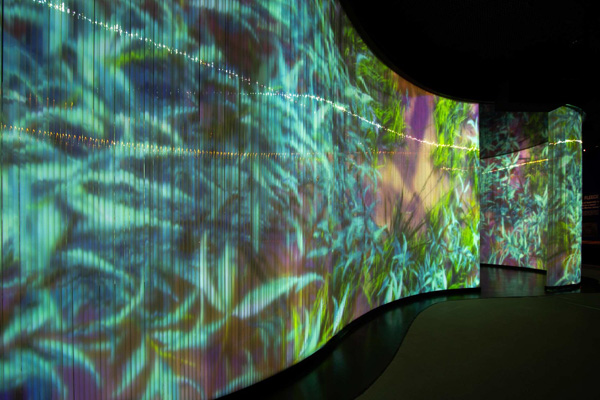 Look Development and Review in VR

On the technical side lay a further challenge because Nick Lawson's physical curtain structure hadn't been built at the time of production. Following Nick's specifications, The Sequence Group decided to build a custom playback system to use inside the HTC Vive, which replicated the physical space virtually. Creating a basic block out of the exhibition plan with the screen placed in context, the artists used this system in creative development and to facilitate client reviews. 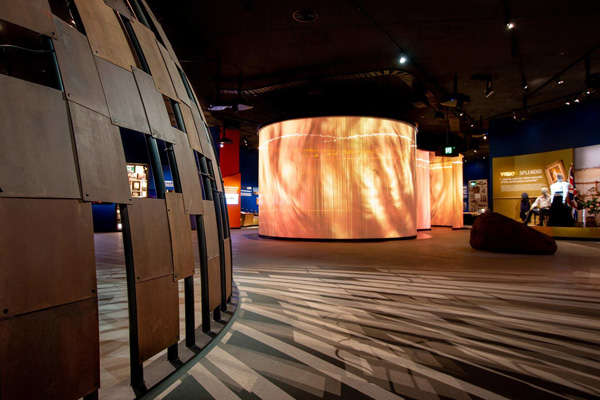 “The latest renders were encoded and placed in a file which would automatically update in Unity to play the latest version on the virtual screen,” said Luke. “It was especially helpful to make sure that framing and action was happening where we wanted them to, because otherwise you really can't get a proper gauge for those factors just by looking at the render on screen.

“We were also working to a very long aspect ratio, owing to the dimensins of the curtain, which of course affected the animations and designs. We picked out a few key hot-spot areas that we knew many viewers would be focusing on in the exhibition space, so we treated them as focal points for key moments. 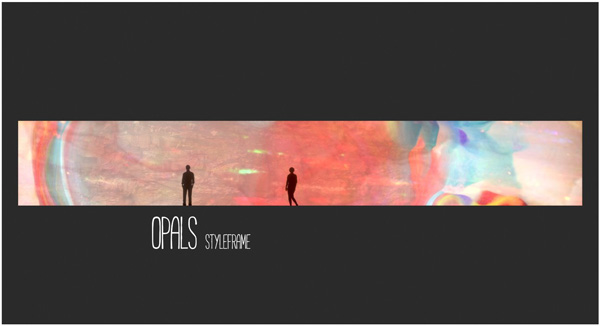 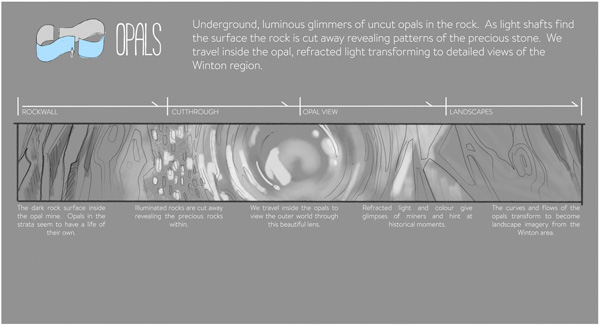 “Later down the track we polished up the VR scene to be more client friendly - that is, with nicer textures and pre-selected viewing points so they wouldn't get too distracted from walking around from position to position in the VR space. The system worked so well we ended up using it for final sign-off at the main office in Brisbane.”

The project took shape as five animated stories, themed and titled 'Opals', 'Drought', 'Rains', 'Flock' and 'Skies', which play out at the museum with 12-minute intervals between them. They are projected via an 8-projector rig onto the silicone rod curtain. Presented with a moving soundscape, the animations envelop the viewer to create a combined sensory experience. from pitch to delivery, the team spent four months on their animations, which included about two and a half months of full production. 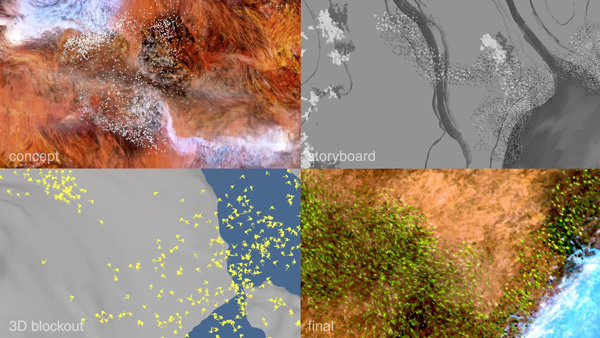 On the team with Luke were 3D artist and compositing technical lead Neil Van Vuuren and 3D artist and compositor Cameron Stewart with executive producer Melissa Benavides. “Combined with Sonar’s emotive sound design and composition, and Dean’s expertise in projection mapping, we produced something that we are very proud to be a part of,” Luke said.

To design and produce the animations themselves, finding the right reference was important because The Sequence Group had to generate nearly all of the content. The team had a chance to travel up to Winton early in the project to gain a feeling for the area and capture video and photographs of the landscape, and Arterial shared reference they had gathered from locals on their own visits to the area. “Arterial had spent a lot of time creating strong relationships with the local community and understanding their culture and history, which was invaluable to the authenticity of the graphics,” Luke said.

“The motion graphic effects and textures are a mix of 2D and 3D. We were working in 3D in Maya and Houdini, and rendering in Redshift.  For compositing and 2D motion, we worked mostly in After Effects, occasionally doing compositing work in Nuke for certain looks.”

From Opals to Rain

Luke commented, “Technically and aesthetically, 'Opals' was one of the more difficult films.  We faced narrative difficulties in portraying the formation of Opals without becoming too literal. Also, creating the opal interior and the opal stalactites scenes were technically difficult to achieve.  We ended up using a mix of 2D motion and Houdini simulations to achieve the looks.  'Rains' was also difficult when making sure we stayed visually accurate to the area during flood times.”

The fact that the narrative would be driven by a simple voice over script helped frame the narrative. But because they were working within a large-scale space where they couldn't be sure where viewers' focus would be directed, they made sure to keep the images somewhat impressionistic. “Evoking emotion through colour, movement and subtle visual metaphors was our priority,” Luke said. “Arterial's Jan Nowell gave us clear artistic direction and was also very open and supportive regarding the styles and treatments we put forward.”

To help everyone anticipate what would happen to the motion and textures shining on and through the tube curtain, Arterial had delivered a prototype version of a section of the silicon curtain, measuring approximately 1x3m, to Sequence Group's studio in Melbourne, on which they could test their content.

“We also graded the footage using this prototype prior to delivery on site, so that we could at least have the material 'in range' for final calibration. We knew from the outset, though, that image sharpness and contrast would be difficult to maintain to a high level on the medium. Consequently we chose the 'painterly' approach we took because we knew sharp lines and forms would bleed regardless.   www.thesequencegroup.com