Many people think of motion capture in terms of marker-covered actors performing inside optical motion capture volumes, surrounded by an array of static cameras, where their performances are recorded to animate characters in movies and games. In contrast, Xsens MVN Biomech human measurement systems are based on wireless inertial sensors instead of cameras. They are lightweight, quick to set up and can be used to record subjects in their usual environments, performing normal movements in a natural manner. 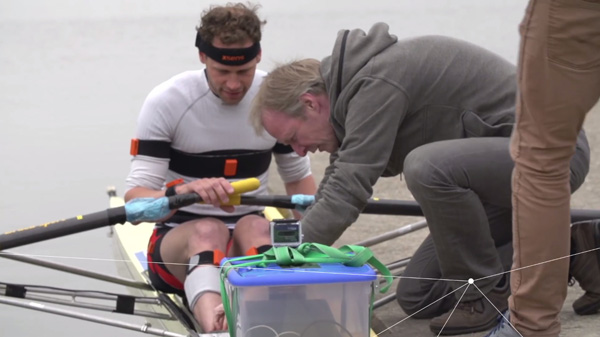 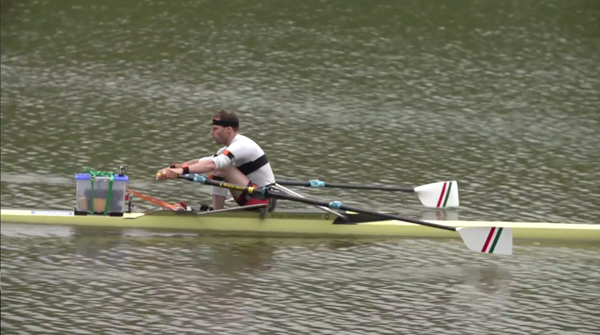 These characteristics make inertial systems especially well suited to researching movement in sports. Either threaded inside a Lycra suit or strapped to the body over normal clothing, the MVN Biomech's sensors can transmit precise information about an athlete's movements wirelessly back to a base unit at distances of up to 150 meters. This application of the system shows how well it plots natural motion and helps visualize specific aspects of the way people move. It has also led to the development of new hardware and software dedicated to understanding motion.

Chris Baten, senior project manager at Dutch scientific institute Roessingh Research and Development, has been using Xsens for some time to study motion in sport. He is also a former president of the 3D Motion Analysis section of the International Society of Biomechanics. He first met the founders of Xsens, which is based in Holland, when they were university students, and has developed various applications for rehabilitation and ergonomics with them.

Currently, Chris uses the MVN Biomech system in his work with rowers, from club athletes to World Championship contenders, who need very specific skills to pursue their sport competitively. He said, “To travel a distance in the shortest time, you need to row at as constant a speed as possible, because every time you accelerate, you meet a wall of water resistance. Only by understanding and monitoring this can a rower learn to put as much of his physical effort as possible into achieving the desired result.” Here, Chris Baten records the motion of previous rowing World Champion Rutger Bruil on open water. 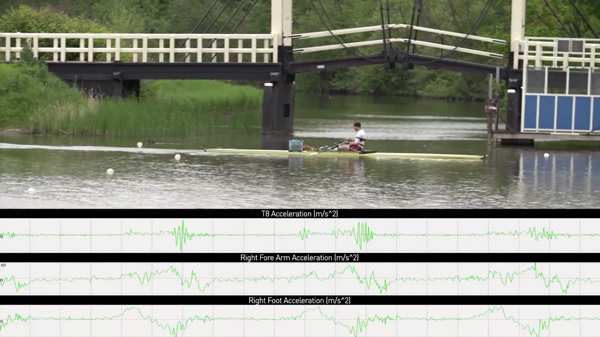 Rowers can move in three ways to generate and control their speed - by stretching the legs, stretching the back and flexing the elbows. “You have to perform these actions in a certain order to get a constant output,” Chris said. “It's all about maintaining the proper coordination pattern, even when you get fatigued.” To assess how coordination changes with fatigue, Chris and his colleagues use an MVN Biomech Awinda system, strapping the sensors to the rower's body to track the motion of each body part. The tracking data is transmitted wirelessly to a tablet mounted in the front of the boat. A further sensor is attached to the boat itself, while two sensors attached to each oar record the way in which it bends.

“If you can measure the force needed to bend the oar, you have a direct measurement of power output pattern, which is the critical factor for rowers,” said Chris. “Also, the sensor on the boat shows the variation in speed very precisely, so you can relate muscular coordination over time to how smoothly it goes through the water.”

For recording on open water, inertial systems are the only practical option. “If you're in the lab, you can use traditional marker-based optical systems,” he said. “But because the cameras have to be mounted in fixed positions a few meters apart, you could never install such systems on a boat. Besides, the data quality of the Xsens systems is equal to – or in some aspects, even better than – that of modern optical systems.” 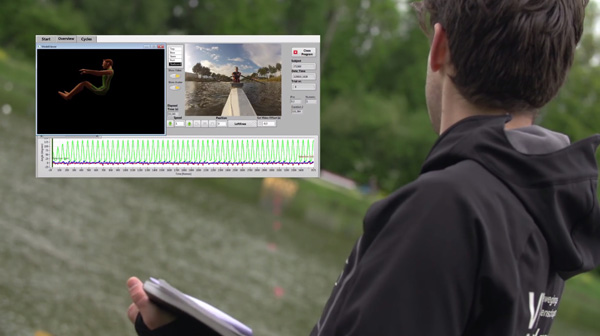 Also, since the Awinda system’s sensors can be strapped to the body over normal clothing, rowers can move naturally and forget they're wearing them, which makes the data more realistic and accurate. Chris has tried using full-body suits, but rowers have to make extreme motions with their shoulders, and if they feel restricted they may not move as they normally do.

Chris and his colleagues use the MVN Biomech system's SDK to read the raw sensor data in their own research software, FusionTools, where it can be combined with other sources of information, such as video streams – the systems come with a reference camera as standard – or electromyography data on muscular activity, for further analysis.

The team has now built a touch-enabled GUI called Rowing Coach Assistant, to immediately display the capture information visually. “Although a coach can do everything in our analysis software, he or she has to be technically skilled to interpret the graphs and numbers in a visually functional way,” said Chris.

“Furthermore, the coach normally has to follow the rower from a car or bicycle on the side of the canal and watch from a long distance away, then stop, analyse the problems, and finally explain it to them later on. Instead, we want to put a tablet in the rowers’ hands that uses the sensor data to reveal to them their own coordination pattern, in real time. They can observe and correct their performance on site during training – and receive the associated motivation as well.”

Chris Baten's colleague at Roessingh Research and Development, Dr Jasper Reenalda, is also developing motion analysis software with which he hopes to target a more mainstream market - joggers and club runners trying to avoid sports injuries. “Every runner fatigues in an individual way,” Jasper said. “We want to identify parameters connected with injuries, ultimately aiming to give the runner feedback in real time.”

Initially, Jasper and his colleagues tried recording data on an optical capture system installed in the Roessingh institute’s motion laboratory, but found that it imposed artificial constraints on the athletes. They were forced to make sharp turns as they ran, for example, some ran too fast for the capture system, and some were too tall to conform to the measurement volume.

After adopting an Xsens system, the team could work out of doors and managed to complete the first ever continuous recording of a runner over the course of a full marathon. Sensors on the athlete's body transmitted data to a receiver mounted on the handlebars of a bicycle following close behind, tracking joint angles, peak tibial impact and angular acceleration. 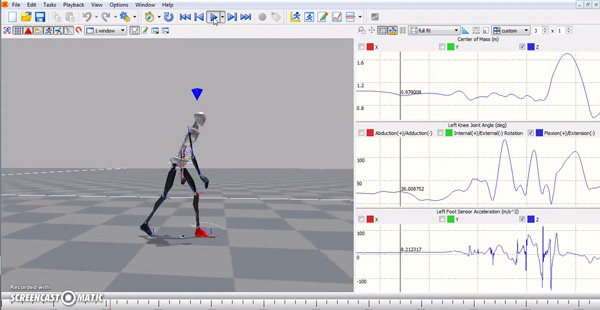 “We found that all the impact parameters increased towards the end of a marathon. Even though the runners were running slower, the impact on their shins increased enormously. We also saw that runners tend to run more asymmetrically as they got fatigued,” Jasper said. “All of these changes, occurring over time, potentially lead to major injuries.”

Although few casual runners will ever complete a marathon, this team has since shown that the same changes occur over the course of even a 20-minute tempo run, in which a runner runs at speed for a pre-determined period. The team now hopes to develop a commercial product that will use three Xsens sensors to track key parameters related to injury development and relay them to a runner's smartphone. When impact forces reach a critical threshold, a warning signal will sound, enabling the runner to correct their gait.

“There are a few systems available that use a single inertial sensor, but it's usually only an accelerometer, so other factors must be estimated,” said Jasper. “With the body of knowledge we have gained from our experiments and by using three Xsens sensors, each of which combine accelerometers, magnetometers and gyroscopes, we can measure those parameters accurately.”

Relying on an accelerometer alone cannot compensate for accumulated drift during capture. Therefore, Xsens has developed an algorithm that overcomes errors by combining the signals from 3D gyroscopes, accelerometers and magnetometers. Gyroscopes measures angular velocity, and if integrated over time provides the change in angle with respect to an initially known angle. Accelerometers determine the direction of the local vertical by sensing acceleration due to gravity. Magnetic sensors maintain horizontal stability by sensing the direction of the earth’s magnetic field like a compass. Data from these complementary sensors eliminate drift by continuous correction of the orientation.

Jasper and his colleagues have now established Life Long Running, a separate organization dedicated to funding future research, and SensoRun, a company intended to develop the resulting systems commercially, for casual and competitive runners.

An example of using the MVN Biomech systems' ability to record athletes under extreme conditions was the University of Ljubljana's work with ski jumpers. Led by Professor Matej Supej, the team captured the joint angles and angular velocities of an athlete throughout an entire jump – during which ground speed can approach 100 kilometers per hour – relaying the data to a Wi-Fi access point in the coaches' tower. 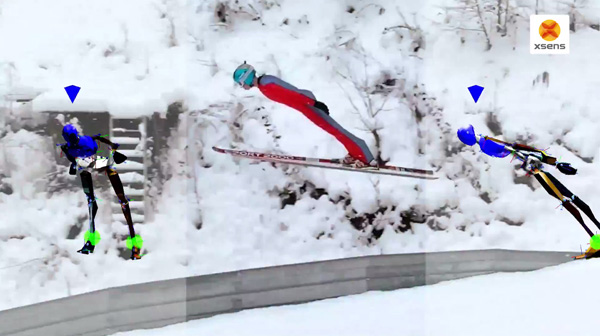 “The goal was to look at the in-run, flying and the landing in the same measurement, which wasn't practical with camera-based systems,” said Matej. “Currently, I believe that only inertial motion capture systems are capable of such a project within a really large area of measurement.” Here, watch Matej Supej capturing the motion of a ski jumper over the course of a jump.

Another situation where MVN Biomech's short set-up time is an asset is in the production of ESPN's documentary series ‘Sport Science’, which analyzes celebrity athletes' moves, such as tennis champion Serena Williams' serve and basketball star Zach LaVine's slam dunk. “We are constantly under time constraints,” said Professor Cynthia Bir of the University of Southern California, the show's science adviser. “These are top-level professional athletes and we only have them for three to four hours.”

The show’s team experimented with optical motion capture, but found that the set-up interfered with the studio cameras. Post-processing times were also too lengthy. “The great thing about the Xsens system is that it's so fast,” Cynthia said. “If you have to move a sensor because the result doesn’t look right, you can recalibrate in a few seconds, which is critical when you are working in production. The athletes put the MVN Biomech on as the first layer, and then put all of their pads and equipment over it. After a while, they don't notice it is there.” Here, watch motion-capture of a high jumper recorded using the system.

“However, for Sport Science the MVN Biomech system’s greateset asset is the quality of the data it captures. It collects at a high enough rate to take measurements of an athlete that we normally wouldn't be able to record. Production teams get excited about taking the information and building models over it for computer graphics, but as a scientist, I get excited about the biomechanical output.”  www.xsens.com