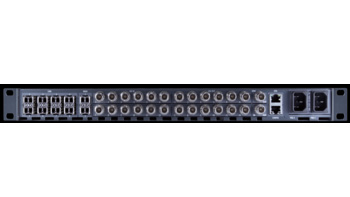 MediorNet MicroN is software-enabled, app-based hardware that can
be many different things: It can be a throw-down signal processor, a
simple point-to-point link for up to 12 bi-directional HD signals, or part
of a large de-centralized router – but it can even serve as a MultiViewer
or a bridge between MediorNet networks and IP networks!

As an 80G media distribution network device for Riedel’s MediorNet line of
media transport and management solutions, MicroN works seamlessly with
the MediorNet MetroN core fiber router. MicroN is a high-density signal
interface with a complete array of audio, video, and data inputs and outputs,
including 24 SD/HD/3G-SDI I/Os, two MADI optical digital audio ports, a
Gigabit Ethernet port, two sync reference I/Os, and eight 10G SFP+ highspeed
ports. MicroN is available as a fully networked MediorNet device, as
well as a point-to-point edition at a very competitive price point.
In just 1RU, MicroN offers a highly versatile signal interface that can be used
in productions of every size and complexity. For the largest media networks
built on MediorNet transport devices, MicroN can serve as a breakout box for
a MetroN router and extend connectivity beyond the fiber I/Os to any type
of video and audio I/O required. Furthermore, MicroN can simply work with
a MetroN router, with other MicroN units, or in a standalone point-to-point
configuration to provide an economical solution for small- to medium-sized
productions. And, like the other MediorNet devices, MicroN has powerful
built-in signal processing features that eliminate the need for many external
devices.