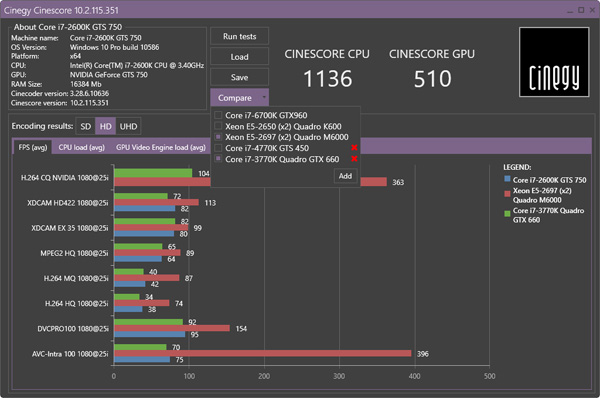 The move from proprietary video hardware to commercial-off-the-shelf (COTS) systems has brought some changes to the media and broadcast industry. modern video and broadcast systems can be based on CPU-accelerated, commodity machines equipped with graphic cards and powered by Intel processors. But Cinegy maintains that it is still difficult to quickly and accurately measure a machine’s actual video processing performance.

Consequently, they have developed Cinescore as a simple way to assess the video processing performance of any given machine. Although there are many benchmark tools that give general information on system performance and comparison, there have been none specifically designed for the broadcast industry. The Cinescore benchmark software is free and can be downloaded from Cinegy’s website at www.cinegy.com.

Video is the primary payload of broadcast. It is encoded, decoded, transcoded and edited, and is further manipulated with the addition of graphics and effects. export or streaming tools can also have an effect. Cinegy Cinescore is designed to accurately benchmark a wide range of commonly used formats and codecs by measuring the encoding speed and the load that encoding places on a system for different target resolutions, such as SD, HD and UHD.

Cinescore uses a combination of professional- quality codecs to measure the encoding speed of a system and determines a system score – the Cinescore. It provides an indication of how many channels of a particular video format a given machine can capture, how suitable it is for HD or 4K editing, or what transcode speed to expect from a newly purchased server.”

In order to immediately categorise the measurement results, Cinegy Cinescore includes comparison results from a range of low-, medium- and high-performance machines. This can help identify performance bottlenecks of an existing system, and suggest potential issues with cooling, BIOS or OS energy profile settings that may require attention.

Cinegy Cinescore is a portable application, meaning it requires no installation. Users has download and unpack a small ZIP file, and double click on the Cinescore application to start testing immediately. No administration rights are required, and no system cleanup is necessary once completed, which makes Cinegy Cinescore very quick and easy to run on any Windows 7 or newer machine. If preferred, Cinescore can be run from a USB stick or from a shared network location, in which case measurement results can be saved and shared for comparison with other machines on a system.   www.cinegy.com