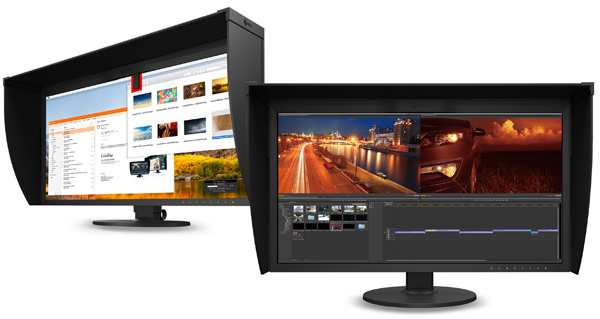 The optimised gamma curves render images to more closely match the way the human eye perceives the real world, compared to standard dynamic range, SDR. Having a monitor equipped with HDR gamma support means that HDR content can be reliably displayed during the editing process so it will be ready for the colourist and the creative grade at the end of the workflow without further adjustment.

ColorEdge CG319X's built-in calibration sensor has been upgraded to allow the user to continue operating the monitor even during recalibration. The sensor swings onto the screen at a time designated by the user and takes up minimal space so work carries on uninterrupted. Although colour critical work should be avoided during recalibration itself, as the screen’s colours will adjust during this process, other work can proceed.

All ColorEdge monitors have a built-in sensor, which makes third-party calibration devices unnecessary and makes sure the screen stays colour-accurate over time. Holding the colour to the given specification means that all people involved in a project are assured that everyone is looking at and talking about the same colour.

The monitor’s colour gamut is wide and reproduces 98% of the DCI-P3 colour space used in the media and entertainment industry. In compliance with the DCI standard, the ColorEdge CG319X shows a high contrast ratio of 1500:1, needed for producing true blacks that are  difficult to display on a typical LCD monitor. 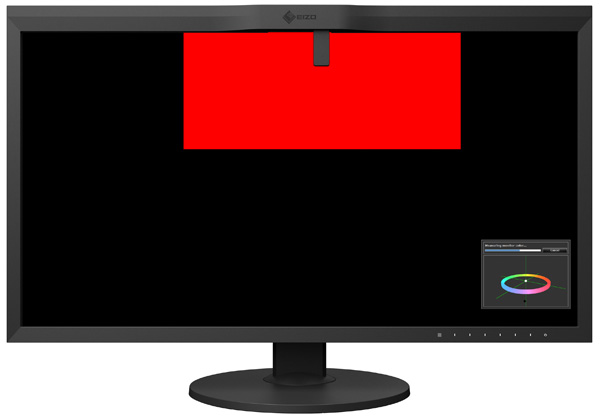 The very low black point and 300cd/m2 brightness [candelas/sqm] can be controlled by the user with custom LUTs or by the calibration system ColorNavigator software, since professionals need to work with a single, set contrast ratio. Also, the screen is manufactured with a retardation film so that tones retain their depth even when viewed from an angle.

The colour and brightness of an LCD monitor can be affected by changes in ambient temperature of the monitor itself. The ColorEdge CG319X has an internal temperature sensor that detects those changes and, learning through artificial intelligence, adjusts the monitor so that gradations, colour, brightness and other characteristics will still be displayed accurately and consistently. The algorithm used in its AI system allows it to perform temperature detection and adjustment even at high brightness levels.

Brightness and chromaticity fluctuations over different parts of the screen are also common on LCD monitors. Therefore, EIZO’s digital uniformity equalizer (DUE) system compensates for the influences that fluctuating temperatures may have on colour temperature and brightness, contributing to stable, more uniform image display across the whole screen.

The CG319X monitor has two DisplayPort and two HDMI inputs, allowing DCI-4K resolution at 60 Hz via DisplayPort 1.2 or HDMI input. A 16-bit 3D Look-up Table, accessible and programmable by user, is available for adjustment of individual colours on an RGB cubic table.

Operation is noiseless and fanless, and maintains low heat output without impacting performance. A light-shielding hood is included, plus a 5-year manufacturer’s warranty.  www.eizoglobal.com