Sky Italia built a new studio, launched at the end of 2018, designed with the intention of creating a new look for sports and a flexible studio space that could accommodate several different programmes.

The studio has 16 dynamic LED walls that can be assembled and re-assembled to change the size and shape of the space, and meanwhile the displayed content can be changed and controlled via Viz Multiplay. A part of the design is a virtual window combined with AR graphics that increases the scope for programming and adds life to the storytelling. Andrea Cavaliere, Sky Italy's Vizrt Graphics Lead said, “We have worked with Vizrt’s augmented reality software for about 10 years. We started with a virtual studio and now use the virtual window to bring graphics in and out of the window during the programme.”

The look they were after was another factor in the studio. When it was being built, their team took inspiration from how light, sound and screens are used during music concerts and incorporated those techniques into their studio setting. Combined with the graphics, the virtual window and AR, they were able to give the space a spectacular look.

Having flexibility in the studio means that the producer can change the studio background and graphics, even within a specific programme, in order to note a change in feature or segment, and to reflect the storytelling. “We are able to control five different layers of graphics inside the studio, so the potential is very wide”, said Marco Fecchio, On-Air Graphic Developer. 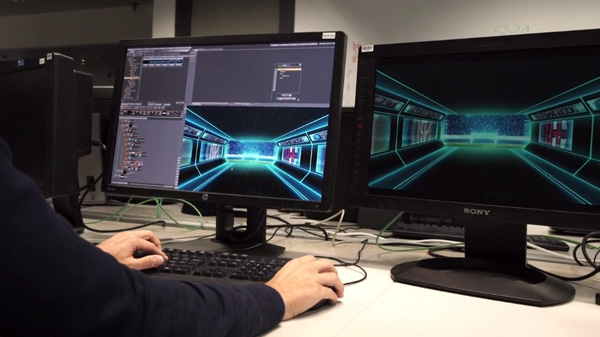 “The graphics are very important to create an identity and also instead of simply forminga background as a scenography element, it is also a main storytelling feature”, said Vincenzo Lagattolla, Head of Creative. We can adapt the background quickly depending on the topic covered and follow the story visually whatever the journalists and experts are saying.”

All these variations are made with Vizrt’s render engine Viz Engine, a display control application Viz Multiplay, and an automation tool, Viz Mosart. Using them together in the broadcast studio means the presenters have a chance to be creative on set, while maintaining the distinctive ‘Sky Italia’ look.

The presenter controls the video wall content by using a custom version of Viz Multiplay on a device. The director in the control room uses the studio automation system, Viz Mosart, to make the content available for the video walls and orchestrate the overall production of the show. The combination of tools allows control over every single image and video shown on the video wall.

Viz Multiplay works as a single interface used to manage the graphics, video and stills on each display, either controlled individually or by triggering content to multiple screens from one command. It also has a design tool for building creative video wall configurations. The successful ones can become presets that allow the positioning of content in the video wall to be updated live with animated effects. 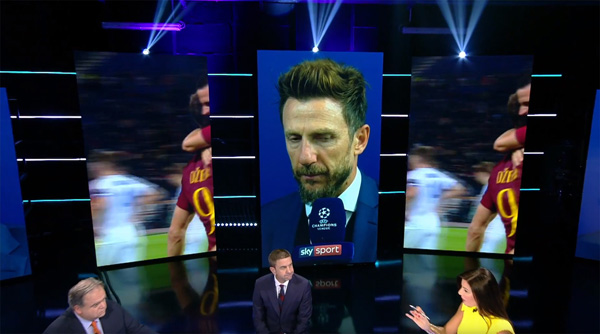 Selecting content and building a playlist is done with tools to browse media including graphic animations, images or clips from a media asset management system. Newsroom journalists can also contribute content for Viz Multiplay by defining the channel where the content will be triggered. The playlists are reflected in the Viz Multiplay interface in the control room where it operates as a standalone control system or integrated with Vizrt’s playlist control systems.

The Viz Multiplay playlist appears as a series of thumbnails showing the content of each media item. The operator either triggers the playlist as it was created in the rundown or makes on-the-fly rearrangements of the content, which is sent to Viz Engine, where the components are composited and rendered out in real-time as the final SDI, DVI or IP content stream, preserving the user’s output options.  www.vizrt.com