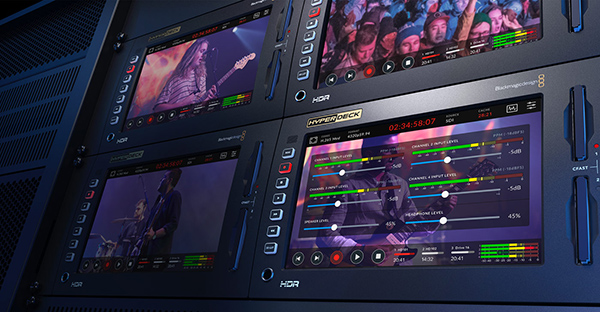 The LCD touch screen is large to give a clear view of the recording and the controls over deck settings. A further set of hardware controls, HyperDeck Extreme Control, can be added to turn it into a traditional deck suitable for broadcast, live production and digital signage applications. The HyperDeck and the Control can be rack-mounted side by side, to create a single broadcast deck unit able to control up to eight modern or legacy decks via the RS-422 protocol.

When working with older broadcast decks, including Digital Betacam, 1 inch C format and Betacam SP, users can set in and out points via HyperDeck Extreme Control, and then edit their material.  To edit across the different formats, the Teranex Express can convert tapes from SD to HD in one step. The basic editing functionality is good for archiving work, and you can edit between frame rates when converting standards between formats.

If the recording media (more details below) becomes full or is too slow, the optional internal cache helps avoid dropped frames. This is done by installing a PCIe flash disk into HyperDeck Extreme 8K to use as a record cache that automatically records any content the media could not capture, and records formats that are too fast for the media card or external disk.

For live production, HyperDeck Extreme serves as a master recorder and clip player. Because the analogue inputs may be used to record from old video tapes, legacy content can be used on streaming services or added to an edit. 8K footage may be used for digital signage owing to the 10G Ethernet connection for fast media uploads and availability of a simple remote control protocol.

In order to also make regular CFast cards practical for 8K video, HyperDeck Extreme uses small, efficient H.265 files for both 8K recording and playback. This means HyperDeck Extreme 8K will be able to connect to upcoming 8K televisions and projectors. On a 1TB card, about 8 hours may be recorded in 8K, 18 hours in UHD and 39 hours in HD.

If recording to other media types is required, then the USB-C Expansion port lets customers plug in an external flash disk for recording. Adding a Blackmagic MultiDock 10G also makes it easier to use SSDs for compatibility with other HyperDeck models. Users manage external disks the on screen menus via the touch screen.

The user interface is a large LCD touch screen with dedicated buttons for play, stop and record, plus a mini timeline for scrolling through recordings. Users can also image-swipe to jog. The LCD includes a heads up display showing timecode, the video standard, media status and audio meters, and it enables the scopes, focus and exposure assist. A range of other settings can all be controlled from the LCD – for example, customers can load and save 3D LUTs, and direct buttons are included for transport and remote control, and enabling the 3D LUTs.

Scopes for QA and Compliance

HDMI, SDI and analogue inputs with built in scopes and 3D LUTs make it possible to use as a field recorder as well, overlaying the scopes on live video, or as a small picture in picture view at the top right of the scope. Users can also carry out quality assurance on masters with the scopes, to ensure standards compliance before streaming and broadcast.

The waveform display shows a traditional luminance (brightness) levels view of an input or playback signal. The vectorscope display reveals the intensity of color at 100 per cent SDI reference levels. RGB and YUV parade displays are sufficient for colour correction and checking for illegal levels. The histogram shows the distribution of white to black detail in images and highlights or shadows clipping.

For HDR workflows, support for HDR standards is included. If files are tagged with the correct HDR information, SDI and HDMI inputs will also automatically detect HDR video standards. The built-in scopes change to HDR scopes when working in HDR formats. Static metadata PQ and HLG formats are handled according to the ST2084 standard. An extremely bright screen with a wide colour gamut manages Rec 2020 and Rec 709 colourspaces, plus 100 per cent of the DCI-P3 format.

HyperDeck Extreme 8K HDR will be available in June 2019.   www.blackmagicdesign.com