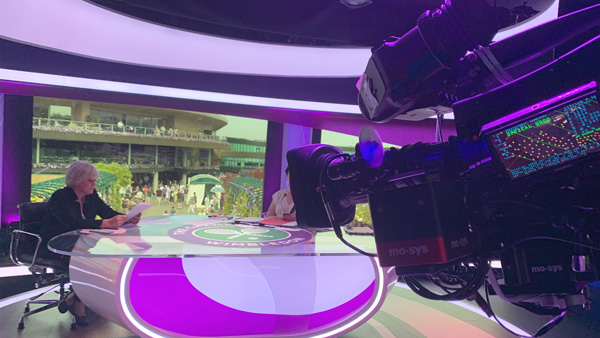 Sport and events graphics company MOOV in London have created augmented reality graphics for the BBC’s studio coverage of the 2019 Wimbledon Tennis Championships, happening 1 to 14 July.

MOOV are using a 3-camera set-up - two cameras on pedestals and one on a jib - with augmented reality applications and 3d-Live graphics engines made by RT Software. All of the cameras are equipped with a Mo-Sys StarTracker camera tracking device, an optical tracking system that gathers accurate location data from the cameras and continuously updates the graphics engine with very precise information about the cameras’ positions, moment by moment.

Thus, when the cameras move, the RT engine knows at all times how to re-align the graphics to match each camera’s perspective and location. Because viewers see what the cameras see from the same perspective, the re-alignment will look correct to them as the cameras move about the set. Real-time accuracy with regard to 3D space is what makes AR work for live broadcast.

For both Mo-Sys and RT Software, this is the first time their AR systems have been in use at Wimbledon. Extending the studio with AR graphics allows the BBC to introduce eye-catching looks that would not be possible in a traditional studio, and avoid interrupting viewers’ feeling that they are a part of the Wimbledon event.

AR graphics include logos or virtual life size cut outs of the players on 3D glass panels in front of the presenters as each match proceeds. Another option is a virtual Magic Window effect, looking out over a 3D render of a tennis court, where results and match data may be presented in different configurations to suit the purpose – laid onto the court surface, for example, or positioned in a vertical list as they are in the video embedded here.

Technical Product Manager at RT Software Luke Harrison said, “All of graphic templates were built in RT Software’s Edit-3D application before going live. Once the design process is finished, the templates are transferred to the Live systems to be rendered in real time during the show. Data content for fixtures or results graphics can then be transferred to the live renderers during the show, or extracted from a database, as are assets such as the images for the player panels.

“Inside the Magic Window, the graphics can be positioned wherever and in whichever 3D plane the designer wishes. In effect, the whole window picture - the court and the fixture or results list - is a complete 3D graphic. The data list is just one element and can be located however required and remains stable as the camera moves in.”

Each camera feed is passed through RT’s render engine as it drives the player cut outs, or the magic window, in real time, allowing it to coordinate all movements. 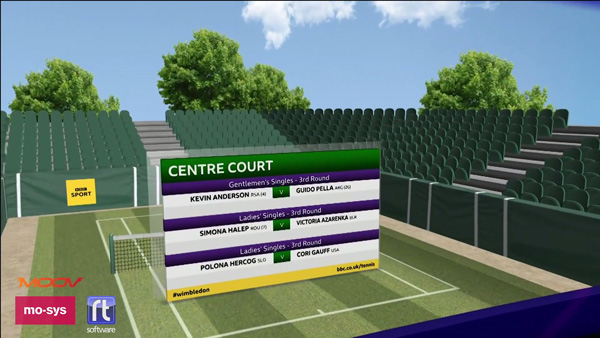 “A render engine is deployed for each of the three cameras, and each engine continuously renders the composited output,” said Luke. “So in fact, the system does not need a switcher operator during the live transmission. The cameras are operated as normal. In the gallery, the directors see the full composite of each camera output plus the AR graphics and can switch between each instantly through the desk, as they would normally.”   www.moov.tv