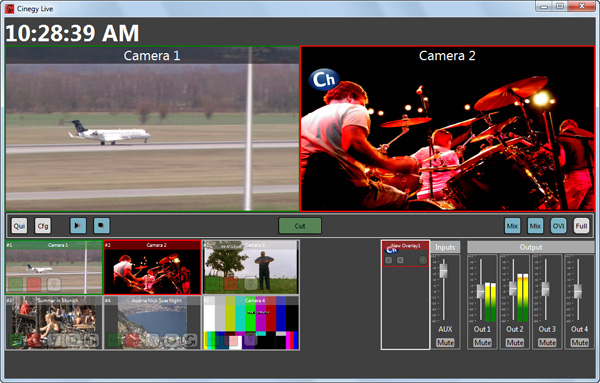 Cinegy Multiviewer software, now in version 15, displays signal streams from satellites, camera feeds, playout devices and other local or remote sources for monitoring before analysing them and raising alerts for detected signal problems. Running as a service operating on commodity IT equipment, video streams can be received over IP/NDI via Ethernet or using standard SDI cards.

Cinegy Multiviewer 15 supports 8K video owing to the integration of the company’s Daniel2 codec. This codec is capable of decoding 16K video at 280 fps using NVIDIA Quadro GPUs, which avoids overtaxing the user’s CPU. Since it was introduced in 2015,  Cinegy Daniel2 has been optimised and integrated into most of Cinegy’s tools including Capture PRO, Air PRO and now Cinegy Multiviewer 15. The result is wide 8K support through IP (SRT/RTP/UDP), SDI and NDI comptaible broadcast software systems.

The Multiviewer can use SRT encapsulated IP input and output, taking advantage of the SRT protocol’s ability to deliver low latency, original quality live video and other media streams over unpredictable networks like Internet. SRT accounts for packet loss, jitter and fluctuating bandwidth to maintain video integrity and quality and is useful for moving streams, without significant packet loss, from cloud deployments or delivering streams to a monitoring facility during live coverage.

For transport within a facility, you can avoid building separate networks for load balancing by using an SRT envelope instead, and allowing the clients to access them as required.

The previous versions of Cinegy Multiviewer had NDI protocol support on input only, but the number of products using NDI has grown, making it necessary to support an NDI Output Mode in Multiviewer 15 as well for flexible systems integration.

Multiviewer does not have a specific SDI output option but users who need one can install Cinegy Encode software that will make Cinegy Multiviewer output the grid over SDI in the same way as it does over IP or NDI.

Multiviewer now has a built-in EBU/SMPTE colour bar detector alert. The detection algorithm behind it will detect a channel encountering problems quickly, such as a missing RTP or video stream, and trigger notification plugins according to the alert severity type you have chosen. You can set up a similar detection system for the audio pure tone.

Regarding the notification plugins, with the Cinegy Event Manager Notification plugin, Multiviewer alerts may now be set up to trigger commands to integrate with various hardware and software components that Cinegy Event Manager controls for the Cinegy Air broadcast automation and video server. Examples of this kind of command might be triggering source switching in SDI hardware routers or Cinegy Route software, GPI (general purpose input) contact closure, or executing a script in the event of an alert.

New multiple-layout output in Multiviewer means users can now output up to 20 different layouts on separate output types. You can design a series of mosaics, or layouts, with different source players, set over each output type available in Multiviewer, and then create a layout file that contains several designed layouts. This way you may deliver specific mosaics to different destinations in a facility, and switch between them. 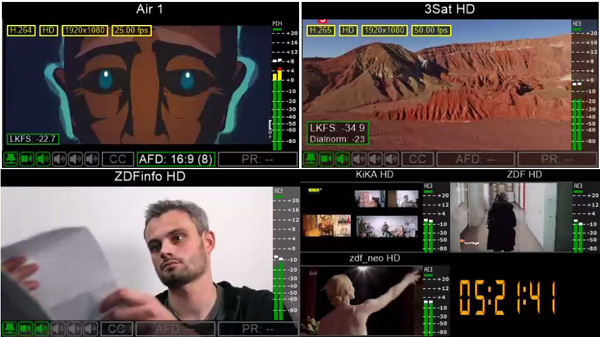 If you have many different source types, you can optimise the way they are handled by splitting them between several servers and allowing them to output to one unified layout, even if the outputs do not have standard 16:9 dimensions. This approach distributes the work between Multiviewer servers depending on their capabilities, and uses one to take care of encoding the unified layout.

This helps with resource management as well. You could configure an auxiliary Multiviewer to transmit a 16-player layout at 3840x1080, to fill a dedicated half of a 4K output layout on a master Multiviewer. This spares some resources on the main Multiviewer, since it only needs to decode one stream – ‘Aux MV output’ – instead of 16.  home.cinegy.com