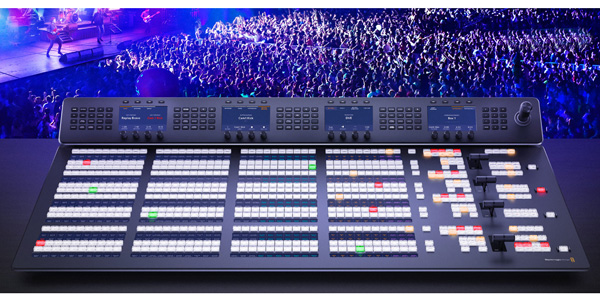 Blackmagic Design’s new ATEM 2 M/E Advanced Panel and the ATEM 4 M/E Advanced Panel are hardware control panels that work with all ATEM switchers, and have dedicated controls for the largest ATEM switchers. The build includes up to four M/Es, 24 separate LCDs for custom button labels, four separate system control LCDs, four T-bar fader controls and others, and supports both desktop use or inset mounting for a flat control surface.

When used with the ATEM Constellation, operators can use the extra level of control to set up more complex effects. The physical broadcast quality buttons, knobs and a T-bar fader also make it more comfortable to access all features simultaneously.

The existing 1 M/E model has a single M/E row with 10 input buttons and a system control LCD screen. With this 1 M/E panel, customers can control all M/Es in the larger switchers. The input buttons have user customisable colours and button label LCDs. A T-bar fader is included, and a joystick for the DVE.

The new 2 M/E model is built with two M/E rows with 20 input buttons and an independent system control LCD for each row. Plus, each row can control up to four M/Es in the larger switchers. Both rows and all input buttons have LCDs for custom labelling. Each row also has an independent select bus. 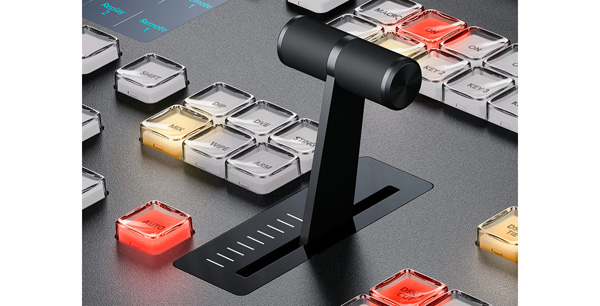 The largest 4 M/E model is big enough to match the features on the ATEM Constellation switcher. It has four M/E rows with 40 input buttons per row and four independent system control LCDs for each row. The panel includes 24 LCDs for custom labelling of every button on every row.

ATEM Constellation has separate internal program and preview buses that switch sources quickly and accurately. Users see their preview bus selection either on an auxiliary output screen or on the multiviewer, and make selections on the preview bus of the advanced panel. Selections will appear on their preview screen to check the source before it goes on air, and then the user brings it online by pressing cut or auto. Sources that need to go live immediately can also be switched on the program bus.

ATEM switchers include a large number of transition styles. When selecting transition types, a system control LCD screen will display the options for that transition and allow you to change its parameters without navigating through menus. You can also cut directly on the program bus and access all transition types.

Standard SMPTE wipes are included, combined with edge softening and other customisation to suit the production style. The joystick can be used to set precise wipe pattern positioning. Dip transitions create a dip to colour effect, or dip to any video source for other effects. DVE transitions create unexpected moves in which the whole image foreground moves.

Users can position the DVE for custom picture-in-picture effects with the joystick, and use the soft knobs and menus on the LCD to adjust the DVE position, size and other DVE features such as lighting and drop shadow effects. The DVE can be set up to fly graphics into frame or select any of the pre programed push and squeeze transitions.

Sometimes the emotion of a live event means operators need to feel a transition to move it perfectly in sync with the camera operators and talent. The T-bar control is for riding transitions precisely as part of the live performance. Like a conductor, their ATEM Constellation drives the mood as the production unfolds.

The joystick moves elements around the screen with 3-axis control adjusting X, Y and Z positions of wipe patterns and the ATEM Constellation DVEs, for example, when positioning live video over video. It scales the size, and positions up down or left and right for precise picture-in-picture effects. Customers can also use the joystick to move the DVE and enter start and end keyframe screen positions to record their own DVE animations. 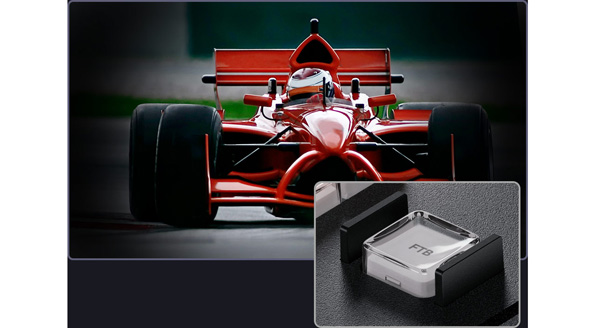 Each system control LCD has a direct access keypad with a button for each function. Hundreds of switcher parameters are available for keyers, transition selection, DVE and colour generators as well as switcher video standards, multiviewer set-up and input button remapping. Operators can save and recall 10 individual panel set ups and store them in the panel. The 2 M/E model has two independent system control menus, and the 4 M/E model has four independent system control LCDs.

The ATEM Advanced Panel can be used to create and record macros and trigger them to playback with the push of a button. Using a computer to work with macros is unnecessary because the operator can trigger them from the same hardware panel they are switching from. When users set up different macros to trigger under each macro button, the thin strip LCD under the buttons will indicate which button is assigned to which macro.   www.blackmagicdesign.com