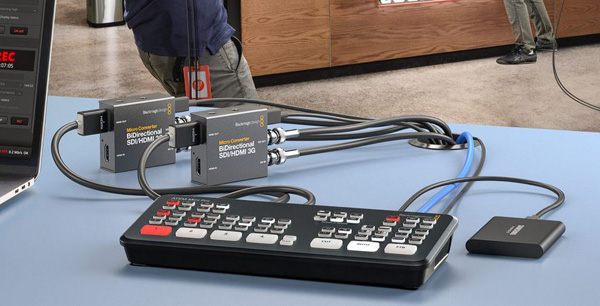 Blackmagic Design’s new line-up of compact Micro Converter 3G models allows the use of HDMI equipment with professional SDI systems, supporting 3G-SDI connections for working with all SD and HD formats up to 1080p60. Micro Converters use USB-C for power, and can be powered directly from televisions or laptop computers. The devices conform to current global broadcast specifications, and can be updated to new standards in the future.

They suit most kinds of broadcast, live production and on set use, for example, for turning a computer display, television or video projector into high quality colour calibrated broadcast monitoring. Users can also convert the HDMI outputs of computers and consumer video cameras to SDI equipment, such as running slide shows on a computer for broadcast-quality titles in live production, or extending long HDMI distances using SDI.

Each converter has industrial standard 3G-SDI and HDMI connections, and settings can be changed via a converter utility on Mac and Windows. LEDs are included for power and video status. The Micro Converters can be purchased with an AC power supply including four adaptors for international use. 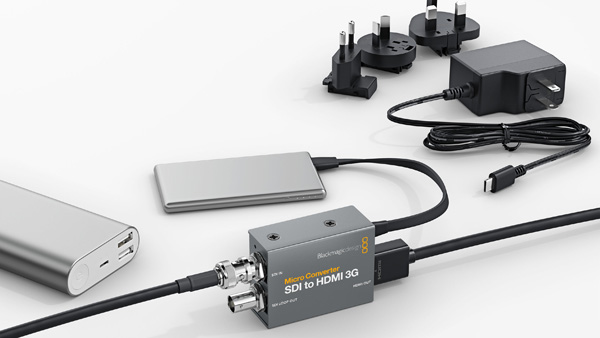 The signal processing and deep bit depth video pipeline result in very low SDI jitter, allowing the extension of SDI cables over long distances, important for live production where equipment such as cameras may be located remotely from switchers. Blackmagic Micro Converters work with both 8 and 10-bit video formats, in RGB or YUV, and in all SD and HD formats up to 1080p60 and include fully embedded audio and timecode support. Any HDMI device that supports timecode may be converted to SDI and fed into larger broadcast systems.

The converter software, downloadable from the Blackmagic Design web site, connects to the USB connection on the Micro Converters and runs on Mac and Windows computers. Customers can use the utility to assign and change the converters’ names, which can be useful for identifying which converter is performing which task. When using the BiDirectional SDI/HDMI 3G converter, customers can set the camera number, telling the device when control is coming from a live production switcher.

The SDI to HDMI 3G model includes a 3D LUT for colour accurate on-set monitoring and applying custom looks or making colour and gamma changes in real time. Custom and other 3D LUTs may also be applied to the 3G-SDI loop output, allowing the converter to serve as a 3D LUT processor.

Using the BiDirectional model for camera control allows you to use a Blackmagic Pocket Cinema Camera with an ATEM SDI switcher. ATEM switchers send camera control over SDI, which the converter can translate to HDMI for the camera. The process works in reverse by connecting and control an SDI camera from an HDMI switcher such as ATEM Mini.  www.blackmagicdesign.com