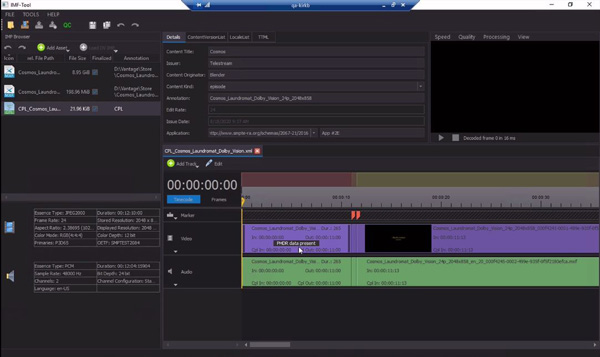 Telestream CaptionMaker authoring software and the Vantage Media Processing Platform now include production tools that broadcast networks and content distributors need who have standardised on the IMF file-based delivery format, with special focus on captioning and subtitling.

In particular, CaptionMaker and Vantage Timed Text Flip now support IMSC 1.1, the new version of the SMPTE standard for subtitling and captioning. IMSC is important in the preparation of IMF packages, and IMSC 1.1 is required when producing content for the Japanese market, as well as for global companies such as Netflix.

These updates were made to differentiate Telestream in the IMF production tool market, combining Vantage and CaptionMaker workflow automation with caption and subtitle processing capabilities. For example, using CaptionMaker, users can author, edit, encode and repurpose video captions and subtitles, and then include these media files in automated Vantage workflows for file transformation as needed when creating primary and supplemental IMF packages.

With CaptionMaker, users create video captions and subtitles for television, web and mobile delivery. The software simplifies the process of complying with government regulations, giving better access to broadcast content for television, online and mobile viewers. The new support for IMSC 1.1 contains several other enhancements, including improved caption and subtitle rendering that makes them clearer and easier to read.

Also, Vantage Timed Text Flip also fully supports IMSC 1.1. Users that need to deliver video content to TV or Internet can use Vantage and Timed Text Flip to transcode captions and subtitles with their media within a single, automated workflow. This type of automation can help organisations meet government mandates in a file-based workflow.