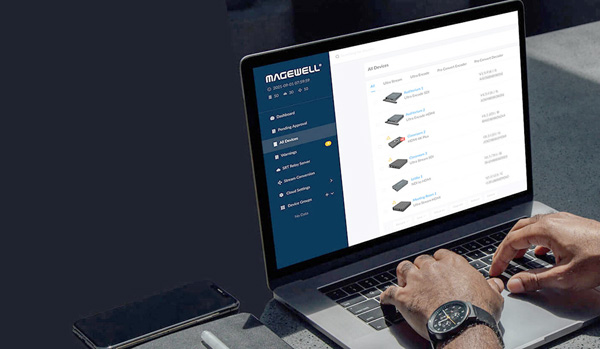 Magewell Cloud is remote management software for Magewell’s IP encoding, decoding and streaming devices. With Magewell Cloud, users can centralise the configuration and control of multiple Magewell IP encoders and decoders and manage streaming set-ups with features such as protocol conversion and SRT gateway functionality. The software is available free of charge for installation on an on-premises server or cloud hosting platform.

Magewell designs and develops hardware and software for video and audio capture, conversion and streaming. Their devices are used in professional video applications including live event streaming, broadcast, lecture capture, video conferencing, gaming and others.

“Magewell streaming and IP conversion devices and applications all have their own user interfaces. However, for administrators and IT staff with multiple Magewell devices to control, or systems integrators supporting Magewell equipment across several end-user installations, Magewell Cloud is a way to manage them all remotely from a single dashboard,” said James Liu, VP of Engineering at Magewell. “Integrators can use the software to configure and manage the devices across several sites through its browser-based interface, which keeps their workflows simpler and more straightforward.” 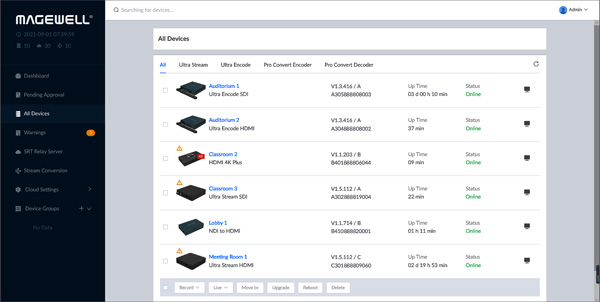 Magewell Cloud supports remote management of all of the company’s current hardware for streaming and IP conversion. These include the Ultra Stream live streaming and recording appliances, the new Ultra Encode series of universal live media encoders, and the Pro Convert encoders and decoders for bridging traditional video and audio signals with IP networks using NDI and other protocols.

Once the Magewell hardware devices have been registered to a Magewell Cloud installation, users can remotely configure device parameters, monitor the status of each device, trigger operational functions – such as starting or stopping encoding – and perform batch firmware upgrades across multiple units of the same model. Administrators can also group devices together and assign permissions for different devices or groups.

Magewell Cloud simplifies one-to-many or many-to-many streaming with the Secure Reliable Transport (SRT) protocol by serving as an SRT gateway. SRT-capable Magewell devices – including Ultra Encode universal live media encoders and Pro Convert multi-format IP decoders – and third-party SRT products can connect to Magewell Cloud rather than directly to each other. This makes allocating public, static IP addresses for each SRT device unnecessary because only the Magewell Cloud software installation needs to be accessible over the internet to enable SRT streaming between multiple endpoints.

While the SRT protocol enables secure, reliable, low-latency transmission even over unpredictable networks such as the public internet, many legacy encoders and decoders do not directly support SRT. The Magewell Cloud platform can convert streams bi-directionally between RTMP and SRT, allowing users to take advantage of the robustness of SRT within their workflows while making them compatible with a broader range of devices and software.

Magewell Cloud is delivered as a Docker container to enable deployment on Windows, Linux and MacOS platforms with minimal configuration requirements. Users can run Magewell Cloud on their private server or public cloud infrastructure such as AWS or Microsoft Azure, and can view the host platform’s CPU, memory and network usage through Magewell Cloud’s browser GUI.

The Magewell Cloud software is now in beta testing, with general availability expected later in 2021. Users interested in beta testing a pre-release version of the software may to submit a request HERE.  www.magewell.com