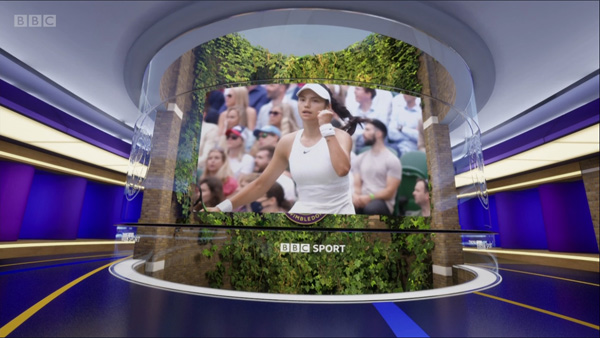 Sports and events graphics company MOOV in the UK created a new look for BBC Sport’s on-site studio at Wimbledon 2021, held 28 June to 11 July. Instead of rebuilding the physical set, MOOV and BBC Sport chose a virtual environment in order to take advantage of new options available through virtual production. The BBC Sport team used the new space to upgrade their storytelling techniques during the Championships and interact with the audience in new ways.

MOOV worked with Brainstorm to design a workflow for a virtual set with augmented reality features, based on Brainstorm’s InfinitySet virtual studio software, which is integrated with Unreal Engine.

BBC and MOOV had already been discussing virtual set concepts since before the cancellation of Wimbledon in 2020. A year later, the planning focussed on managing the coverage inside the virtual facility – in particular, its ability to produce more engaging stories, data and graphics. 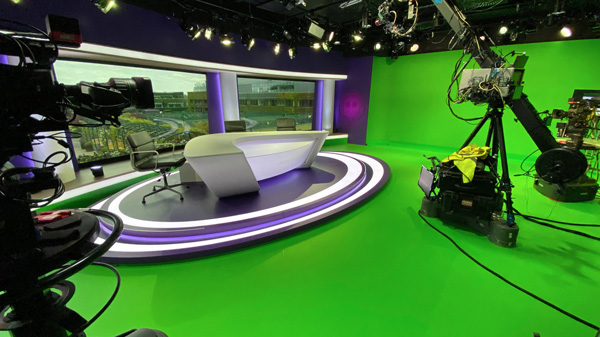 Based on a green screen stage, the virtual studio at Wimbledon extends the available area beyond its physical limits by a large margin, creating new virtual spaces around the presenters’ physical desk, which in effect created a 360° studio. It also accommodates alternative camera angles, more room to add infographics and, for the client, further Wimbledon branding.

Because the set designs only became available at the end of April 2021, the project had to be produced in record time. MOOV worked with BBC Sport and a team of artists, working on Brainstorm’s InfinitySet to create the virtual set and AR tracking, using Unreal Engine.

The studio wanted to use five cameras, including pedestals, jibs and PTZ controllers. To make sure they were all recording output at the required quality, each camera was equipped with its own Brainstorm InfinitySet system with Unreal Engine. The final output delivered the real set – which had a desk for the presenters and actual windows looking out to show the courts – integrated with the virtual world so that the graphics and AR information could be displayed on demand.

Inside the Virtual Set

The graphics appearing within the virtual set came from diverse sources. COO Mike Phillipson at MOOV said, "Primarily, we would take a key and fill from our graphics system, which was set up as a dual channel system that allowed the operator to define where they wanted their content to go, either as a traditional keyed graphic via the Vision Mixer or into the 3D space of the Virtual Studio. 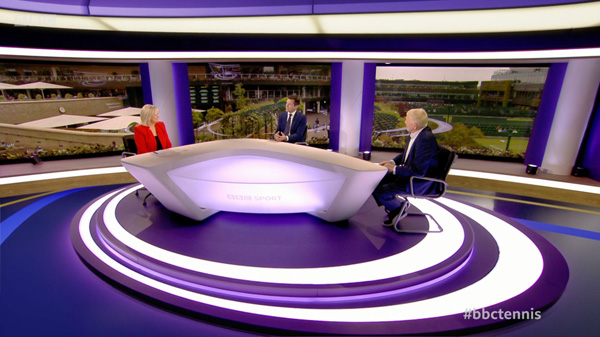 “The virtual studio engine took both the key and fill signals, allowing us to place the graphics in glass objects, for example, to create eye-catching, dynamic content. The graphics could appear in two main areas – a 3D Lightwell feature, located camera right of the presenters’ desk, or the main screen – giving the editorial team options in their coverage.

“The Lightwell had several options of its own. It contained its own carousel that allowed us to display video sources fed out from the vision mixing desk, or graphic content from the graphics system. The carousel could also be hidden to show an ivy-covered interior containing dynamic assets we used to display player imagery. These image frames could be configured in various orientations and sizes to suit the editorial needs at the time.

“The graphics operators controlled the carousel in real time, selecting the video sources or graphics sources to display on each tile as requested by the Director. The sources were sent down auxiliary feeds in the vision mixing desk, of which two were available. Any source hitting the desk could be fed to us, but mainly EVS servers or similar lines were used. The operator would rotate the carousel on the Director’s cue, make an appropriate source selection in the interface, and display the content.” 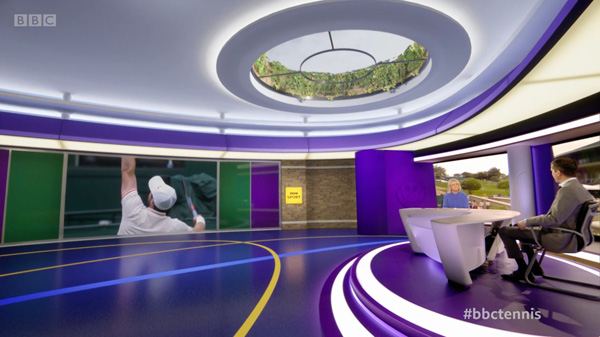 One of the most satisfying outcomes of the project was the extra Wimbledon branding that BBC Sport were able to display. Mike said, “Creating a virtual studio allowed us to really encapsulate the look and feel of the Wimbledon grounds and deliver that to audiences at home. Wimbledon has such unique architectural characteristics, as well as distinctive flora, and by focusing on these key aspects, we were able to draw on the ‘softer’ branding traits that Wimbledon is associated with.

“The Wimbledon logo and its purple and green colour scheme are recognised the world over, so that was always going to feature as a basis of the design, but adding in traditional brick features, reflecting what visitors see around the grounds, within the Lightwell and the roof certainly helped us add distinctive detail.”

InfinitySet has several features for combining live and recorded video sources within the same production, and then combining these inputs with 3D graphics, talent from different locations and AR elements, in the final output. The software maintains camera perspectives and the depth of field of the talent, according to the user’s intentions. 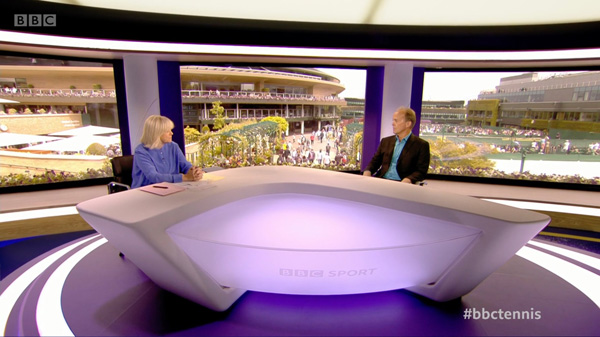 Unreal Engine content can be used as background or foreground material, and InfinitySet now has an Unreal Engine Control interface which means that Blueprints, Objects and Properties in the UE project can be controlled directly from InfinitySet, instead of preparing all of these items in advance. It can also transfer input to UE to use as textures within a UE Object, such as live video, chroma-keyed talent, graphics and still images.

One of InfinitySet’s greatest advantages was the flexibility to change, adapt and adjust what was happening on set, on demand. “We created a virtual space that allowed dynamic coverage of the tournament and combined real and virtual imagery in a way that enhanced the story and audience engagement,” said Nev Appleton, director and co-founder at MOOV.

“The challenge of the project came not only from the time constraints, but also to the restrictions on people on-site as well as technical issues, such as having to re-purpose the studio for the daily highlights. But despite the challenges, the results have encouraged us to use virtual elements and techniques to enhance live events more regularly.”  www.brainstorm3d.com