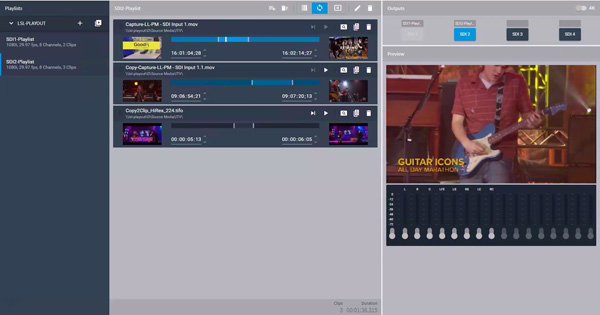 The first release of Lightspeed Live Capture in 2019 helped broadcast engineering and operations staff capture content from tape or from live event production scenarios. It has been used at global sports events such as the FIFA Men’s and Women’s World Finals in Russia and France, and several broadcasters used Lightspeed Live Capture at the Tokyo Games this year. Recognised for its resilient, reliable operation despite challenging live production environments, this new version can capture media over 12G and ST 2110, promoting the transition to IP-based workflows.

Currently, many 4K/UltraHD workflows configure up to four 3G-SDI connections to carry and create a full 4K/UltraHD image. 12G-SDI simplifies the task by transmitting the full 4K signal across a single 12G-SDI cable [note that 12G-SDI is 11.88 Gbps, ST 2082]. Also, the SMPTE ST 2110 Professional Media Over Managed IP Networks suite of standards is a major contributing factor in the movement toward one common IP-based mechanism for the professional media industries.

Telestream notes that the ability to edit and monetise content effectively within large-scale ecosystems is critical. A compelling feature within Lightspeed Live Capture is its ability to ingest content for immediate use with Edit While Capture, or frame-chase, workflows on regular NLEs, both on-premises or in geographically dispersed locations.

“The ability of broadcasters and OTT service providers to live stream over IP at scale, with equivalent resilience and efficiency to linear broadcasts, is gaining importance for businesses,” said Scott Matics, Senior Director of Product Management at Telestream. “These updates to LightSpeed Live Capture make it possible to orchestrate IP workflows within larger content delivery ecosystems.”    www.telestream.net