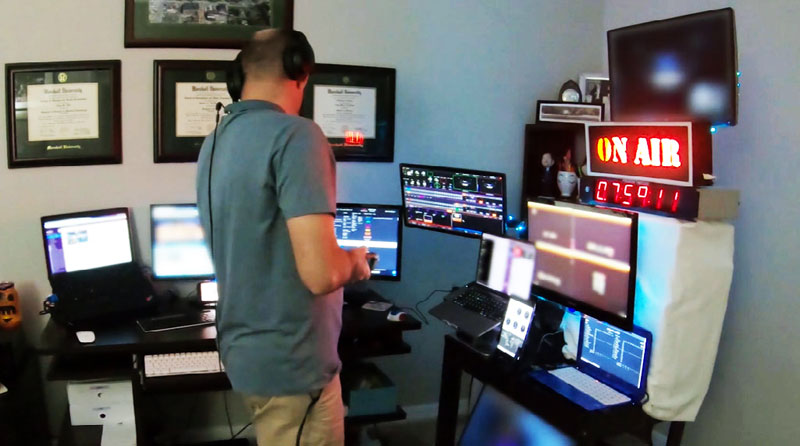 When the pandemic first arrived, sports leagues were forced to cancel their seasons or televise games without live audiences, and broadcasters suddenly needed to produce and distribute more content to support viewers at home. Meanwhile, since everyone – athletes, producers and viewers – needed to comply with new health safety restrictions, streaming content, at the highest quality achievable, seemed to be the best approach.

Media.Monks is a marketing and advertising services company that works with clients on projects ranging from ad campaigns and experiences to digital transformation, standing out through their expertise in content, data and digital media. The company is large and diverse, working from 48 offices spread over 6 continents, with its headquarters in The Netherlands.

In November 2020 Media.Monks responded to an enquiry from a major sports league that was facing its own broadcast challenges and needed to produce roughly 20 of their matches in UHD video. However, due to COVID restrictions, the on-site crew at each of the league’s arenas would be limited to two people, working from a table-top encoding set-up measuring just over 1m2.

Remote Production from the Ground Up 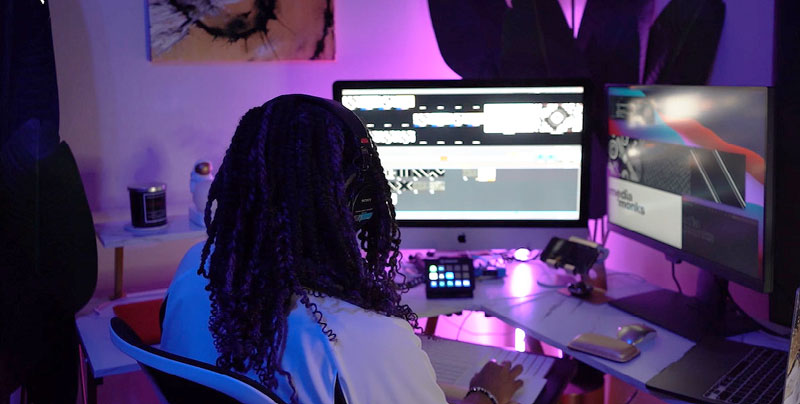 Led by Lewis Smithingham, Media.Monks’ Director of Creative Solutions, their team devised a remote production workflow to produce multiple matches, sometimes occurring simultaneously, that involved six fixed, unmanned cameras strategically placed around each arena, along with a camera technician and one encoding engineer. The live game would be distributed via the AWS public cloud service.

Taking into account the cameras, graphics, remote announcers and other production sources, they needed a 4K switcher that could handle up to 16 inputs and also support 59.94 fps distribution. Lewis noted that such a device was not easy to find.

After some trial and error, they decided on a decentralised, cloud-based architecture that could, in effect, do the work of three standard mobile production trucks. Once the cloud was determined as the foundation of this workflow, the Viz Vectar Plus platform, a software-based Live Production system from the Vizrt Production Control Suite, became their tool set. They undertook physical testing in January 2021, and then fully integrated the Viz Vectar Plus software into Media.Monks’ workflows over the course of two weeks. The first live games went to air from the cloud a week later. 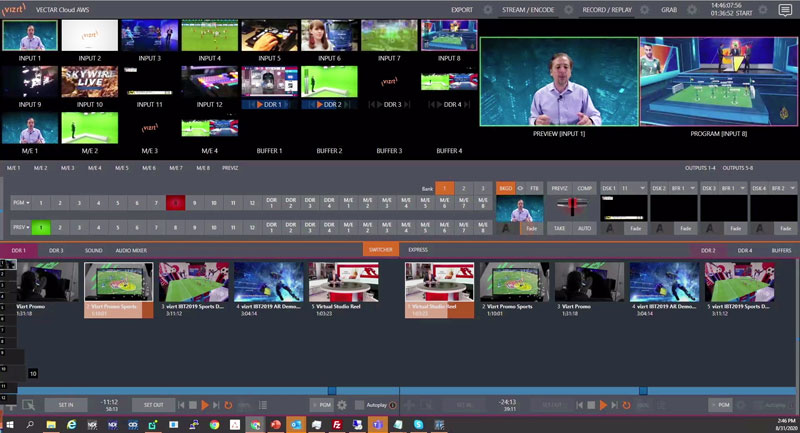 The Viz Vectar Plus live production system has all of the necessary tools present in software. Its implementation depends on having the correct hardware available. It can either be downloaded to install locally on a standard PC that meets the necessary performance requirements on-premise, or adopted as a virtualised package running in private or public cloud environments that support GPU processing. This flexibility has proved invaluable for production companies that work with lots of varied clients in different environments.

With built-in media players, recording, streaming, audio and graphics control, Viz Vectar Plus can be used to output multiple versions of the same program with differences in graphics presentations, aspect ratios and resolutions. Also, because it is purpose-built soﬅware, already tightly integrating standard computing and network infrastructures as well as NDI IP integration and optional SMPTE 2110 connectivity – Media.Monks said it has helped control spending on physical equipment and soﬅware updates.

Lewis said, “We looked at other products in the cloud to serve our purpose, but none of them could handle the workflow in the way we wanted it to go. Also, we have not had problems with latency or the delivery issues that some other systems are prone to,” he said. “This Vizrt suite of live remote production tools is designed with professional large-scale broadcasters in mind. Our production trucks can work around the world in a single day. It’s fascinating to see that type of business transformation occurring.” 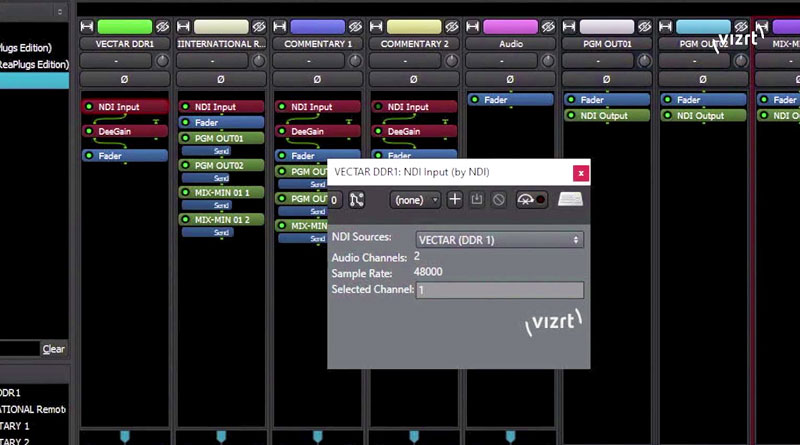 Beyond this particular job, cloud connectivity has also allowed Media.Monks to keep its staff of about 6,000 people around the world working steadily throughout the pandemic. “When we first looked at Viz Vectar, we recognised straight away that it had all of the tools we were used to, but in a virtualised environment,” said Joe DeMax, Broadcast Technical Manager a Media.Monks. “It was like working in a broadcast truck, but all of your infrastructure was in the cloud. This meant we could continue to put our best people on the production no matter where they were located. It truly distributes the team, not based on where each person is but based on talent.”

The company could put together teams of people best suited for the job by making a fully remote system available and a secure bridge to the cloud. All members were able to work collaboratively without being in the same physical location. During one of the live match productions, Media.Monks’ team was comprised of a person based in Nottingham, England, several in the US and some in the São Paulo, Brazil office – a global production team working on the same project in real time. That ability was critical to their success. (See diagram below.) 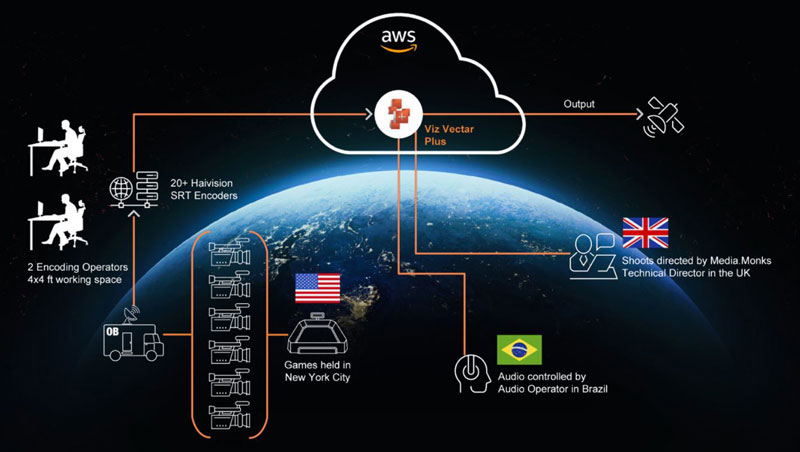 Media.monks set up a globally dispersed team and remote workflow to precisely match their client's requirements.

The best part from the point of view of Rob McNeil, Operations Director Live / Broadcast at Media.Monks, is that Viz Vectar makes racks of servers and uninterruptible power systems (UPS), power, generators and other equipment unnecessary. “You can now have flexible access and all of the production capabilities you need via a license that you can activate at any time,” he said. “We realised that the applications we depended on a year ago were simply not capable of what we are able to do now with Viz Vectar Plus.”

Since their initial experience with Viz Vectar, Media.Monks has now signed with several clients that are using it for cloud-based production operations, and some of these clients and their brands have established continuity through this recent period as a result. Most of Media.Monks’ staff are now working on Viz Vectar Plus as well. Lewis remarked, “Having this scalable platform that will work the way we want it to is empowering and means we have a layer of stability, performance and control over our operations.”  www.vizrt.com