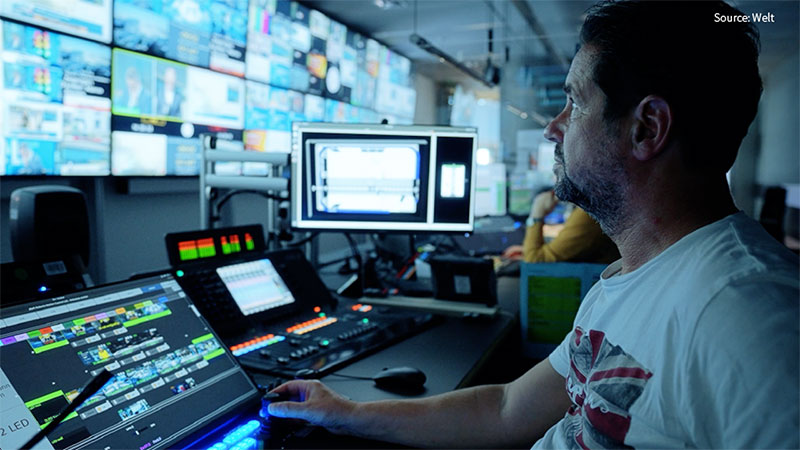 Through Viz Engine broadcast graphics compositor and renderer, Engine Switcher automates the production of graphics content and scene-based switching without depending on a dedicated hardware switcher. It can be used to design entire shows – including video switching – to simplify production for journalists. Show content is defined in the rundown as preset scenes, while the production is automated with Viz Mosart.

Traditionally, broadcasters have organised their studio workflows around a single piece of hardware. Over time, the power, space and specialist expertise that dedicated video switchers consume have become costlier, demanding a larger proportion of the studio’s resources.

During Vizrt’s recent collaboration with German news broadcaster, WELT, the teams developed ways to synchronise components and processes, respond to changes in the news programming cycle, bring in media from diverse sources and react faster to breaking stories. These developments contributed to Engine Switcher by enhancing their ability to keep their audience interested and engaged and, most important, to keep broadcasts running uninterrupted. 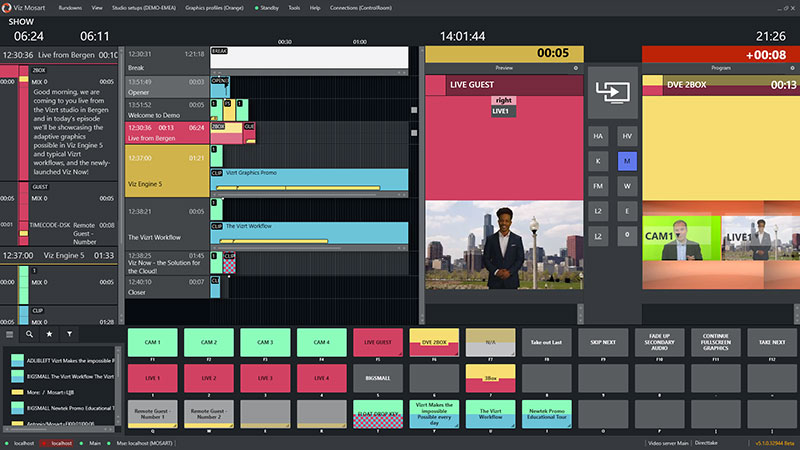 Philipp Kern, WELT’s Senior Director, noted that their users find little difference between a physical video switcher and Engine Switcher software. “The journalists have more direct responsibility for the show, and it gives the day-to-day production more options when putting the show elements together,” he said. Each show’s look and feel can now be defined in the graphics scene, while dynamic video transitions and graphical elements are handled as part of the same automated composition.

Engine Switcher gives broadcasters the potential for greater production consistency and less complexity across the production chain. These changes may help control running costs and use the production team’s bandwidth more efficiently without compromising on graphics quality, automation or video flexibility.

A new update to Viz Trio, version 4.1, has been released as well, aiming to ease and simplify the control and playout of Vizrt’s Adaptive Graphics, designed for and delivered to a wide choice of platforms. Vizrt notes that today’s audience is less coherent, and that the channel landscape and media itself continues to change rapidly.

Broadcasters need to keep content timely and of a high quality, and also need to adapt their media to work equally well across multiple output platforms. Maintaining brand consistency without incurring extra costs is also important.

Adaptive Graphics are able to deliver multi-platform content through a single workflow that automatically adjusts resolution and format to support specific display devices. Users can effectively create their content once and publish multiple times to multiple platforms as part of a single production line. 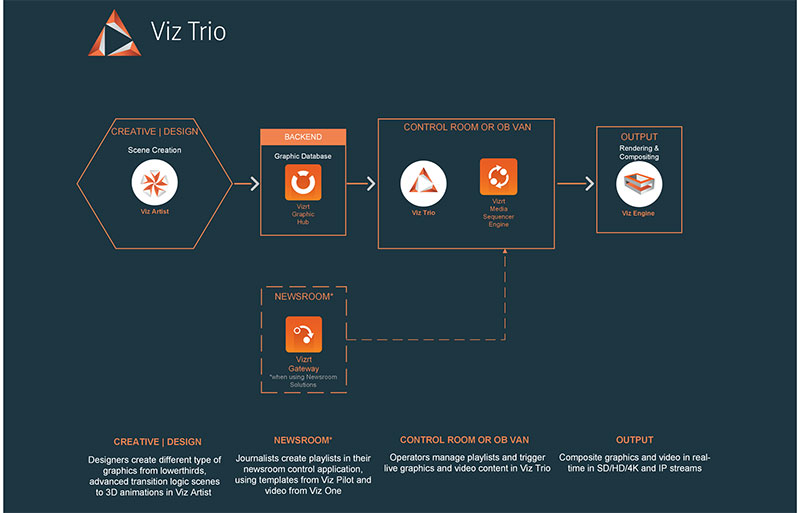 Operators use the Viz Trio 4.1 interface to switch the live graphics preview between different platforms – adapting to broadcast, mobile, square or any custom ratio. This ability allows them to monitor and adjust every output format, ensuring that the adapted graphics look as expected on all aspect ratios.

A single operator can playout the Adaptive Graphics scenes to all channels. This factor can save time and resources for both broadcast and online production, and avoids spending time to go back and forth with the design department to modify graphics, as the single graphics scene already contains the needed information to achieve the desired looks in its designated format. By automating some of the multiplatform workflow, users can devote more resources to creating original content, preserving branding and enhancing quality.   www.vizrt.com