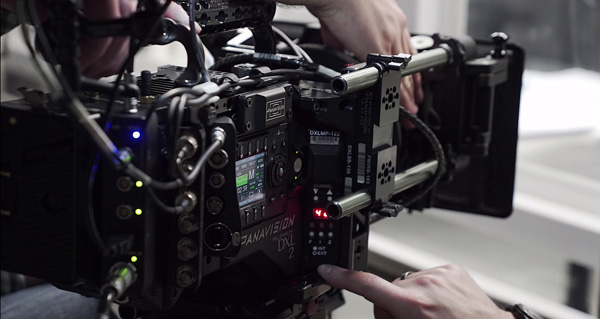 The new large-format 8K Panavision Millennium DXL2 is a camera combining Panavision’s optics and camera architecture, the RED MONSTRO 8K VV sensor and Light Iron Color2 science, LiColor2. When the DXL2 was shown at BSC Expo 2018 in London in early February, each of those components were the result of interesting developments in digital cinematic photography.

So, we decided to ask Michael Cioni, Senior Vice President of Innovation at Panavision and Light Iron, for details of how the DXL2 pushes ahead the functionality built into its predecessor, the Millennium DXL, which has now been used on more than 20 feature films, plus TV shows, commercials and music videos.

Inside the DXL2 Digital Image

He first talked about the DXL2's new sensor, the RED MONSTRO 8K VV, with 16-plus stops of dynamic range, improving image quality and shadow detail, and measuring 40.96mm x 21.6mm, nearly twice the area of standard S35 sensors. Since larger sensors decrease depth of field due to shallower focus planes, cinematographers have more chance to control images using z-depth cues – this increases the scope for zooming, reframing and cropping the high-res images because viewers still need these perspective cues inside the new frame. Also, the camera can take advantage of lenses with faster T stops, like the Panavision lenses that are faster than a T1, and further decrease depth of field.

The sensor's wider dynamic range produces a subtle transition from highlights to shadows within the scene, and blends complex colours gradually. All of these factors - colour, resolution and dynamic range - result in smoother, less sharp images. According to Michael, the relationship between colour, resolution and dynamic range is a classic example of the whole being greater than the sum of its parts. “Thinking of a top athlete, on their own, speed, power, strength and flexibility are each parts of the athlete's makeup, but only when they are combined together do you achieve a medal-winning performance,” he said.

The most compelling images, which both cinematographers and consumers are rapidly starting to expect, happen when the combination of these elements work together in concert and have an additive effect on the image. Though none of these elements require the others to exist, when they are combined, the quality of each of these parts rises to a new level.

He described how 'sharpness' can mean different things to different people and, interestingly, specific levels of sharpness can be desirable to one cinematographer and undesirable to the next. The first thing to understand is that that when working with a high quality sensor, the optics should play the most important role in governing how sharp an image is or isn’t.

He said, “While that concept involves numerous factors in its own right, at Panavision we have learned that cinematographers and colourists often choose cameras based on the look and feel of skin tone, and that good skin tone has as much to do with perceived smoothness as it does with actual colour. Professional cameras are all capable of generating, or replicating, the values of skin tone a cinematographer is after.

“Nevertheless we have found that any difference in the smoothness or sharpness of skin is largely based on the resolution of the camera that initially captured it. This is not about focus, rather the perceived level of sharpness. For example, an image with more contrast will appear sharper than an image with less contrast, even when they are the same resolution.

“Because CMOS sensors use polygon pixels to compose an image, edges within images are forced into the shape of 90º angles. Faces don’t look their best when drawn with 90º angles because it accentuates pore and wrinkles, and reduces the dimensionality and subtlety of your data. This is why when the number of pixels (active resolution) goes up, the lines in a face become rounder and have less contrast because the 90º polygon angles are so small they are virtually imperceptible, lowering the contrast and increasing the perceived smoothness of an image, regardless of the lens.” 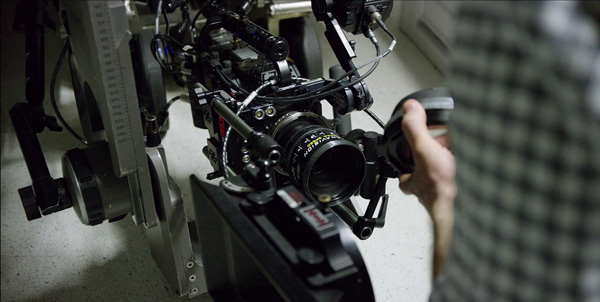 This 'less sharp' feeling is achieved when more colour values can be applied across a greater number of pixels, so that skin tone can be rendered with more values – or, more shades of grey. The greater the number of values in your transition from one colour to the next, the smoother a gradient will appear, which is ideal when photographing a natural face.

The combined effect of pixel size and angles of edges is called pixel pitch. Michael noted, “It may seem counter-intuitive, but lower resolution cameras will always have a sharpening agent driven by the edges of polygons. The trick is to make these polygons so small they behave more like round film grain than a 90º pixel. This is why the best photographers in the world shoot the best photographs on cameras that have over 50 megapixels of resolution.”

With a native base ISO of 1600, the DXL2 maintains low-light sensitivity and limits noise. Michael recalled that in the past, pushing cameras or films stocks to higher ISO speeds would create signal to noise or fixed pattern noise trade-offs. “Sometimes these looks are desirable for creative aesthetic, other times they are used to compensate for a dark location or a slow lens. However because 1600 is the native setting of DXL2’s RED Monstro sensor, it doesn't need to be artificially gained up.

“Rather, 1600 is where equal parts of dynamic range - that is, +/- 8 stops - produce a clean, balanced image with over 16 stops of total dynamic range. DXL2 users will find that 1600 ISO is equal to or better than 800 noise levels on other cameras they’ve used in the past. This becomes a great tool because you can elect to push to 3200 ISO when required with insignificant noise penalties, making DXL2 one of the most sensitive cameras on the professional market. Furthermore, unlike some cameras, DXL2 does not use any noise reduction to achieve this. On the contrary, RED’s Monstro sensor is designed with super-sensitivity in mind.”

To reproduce colour, sensors can only apply a portion of available dynamic range to the areas they can fully resolve. This is why sensors with fewer pixels deliver fewer levels of transition from light to dark. With DXL2’s 8K sensor, over 16 stops of dynamic range can be applied to subtle areas of the same frame, allowing for improved skin tones with lower-contrast transitions from light to dark.

Similar to dynamic range, sensors can only apply all of the available colours to parts of the frame that are clearly resolved. So, taken all together, 16-bit sampling, 16 stops of dynamic range and 35,000,000 pixels add up to better colour reproduction and more flexibility in colour correction and the grade. 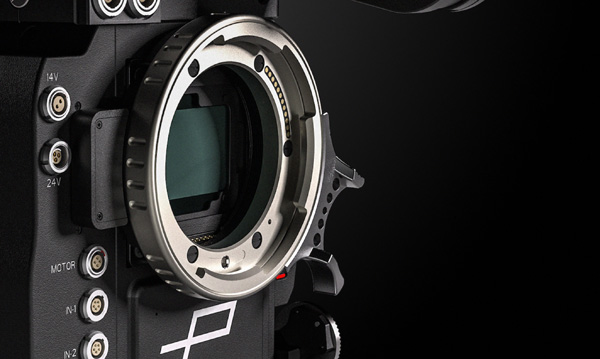 A custom colour correction filter, PX Pro, was added to the DXL2 sensor to increase colour separation and precision, for images that are easier to control. The filters produce an infrared (IR) and ultraviolet (UV) cut that increases colour clarity and reduces noise and IR contamination, cutting UV rays below and IR rays above certain levels so that only the light rays in a chosen portion of the spectrum pass through the filter and into the camera. The filter's characteristics are best seen in lens flares and highlights.

The camera's colour palette is based on RED’s image processing pipeline version 2 (IPP2). Using IPP2, users can view matching images in the camera, through a DIT station, in dailies and in DI. Panavision supplies all Light Iron Color 2 3D lookup tables in-camera, for users on set or in post.

DXL2's 16-bit images can be graded to quite varied results in the DI or, with the Light Iron Color Film LUT, the production can emulate a film-like render while still on set.  Light Iron's specifications encompass 16-bit files, RAW image capture, ACES compatibilty and use of REC2084. Transforms are available for some other colour spaces.

DXL2 is a dual-recording system, capturing full resolution and proxy files at the same time but outputting proxy files faster for editorial, to start post-production. DXL2 has three options for recording codecs - users decide which file type fits their editorial pipeline the best, and when editing is complete, the proxy file metadata will match the RAW file metadata to simplify final conform in 2K, 4K or 8K. 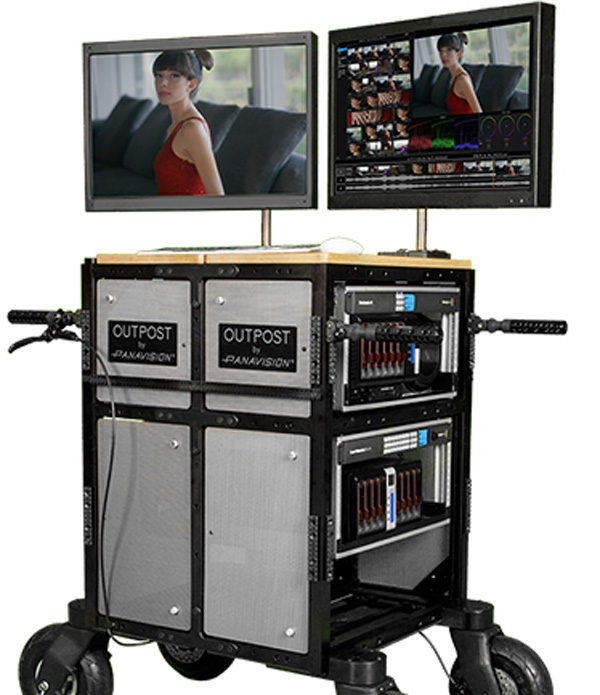 The codec options include 8K RAW mode, recording 16-bit REDCode RAW at 1 TB per hour when shooting at 24fps. 4K RGB and 2K RGB modes both record Apple ProRes or Avid DnxHR, at 500GB/hr for 4K and 250GB/hr for 2K, for 24 fps video. 8K Raw and 4K RGB capture have maximum framerates of 60 fps, and 2K RGB mode has a 120 fps maximum. Users can take advantage of familiar in-camera proxies like ProRes, which integrate straight into existing workflows.

Thinking about resolution, proxies and  video workflows, Michael remarked that the rate at which camera resolutions go up tends to keep them ahead of the average exhibition resolutions available in the consumer market. “Cameras will increase resolution every two to three years while televisions and projectors will upgrade nearly every 10 years,” he said. “Therefore, using proxy files becomes more important because decoding and transcoding original camera negative (OCN) become more and more taxing as resolutions increase.”

A dual workflow also means the RAW files can be moved to RAID or LTO tape systems, and the proxies go to editorial and web destinations. This happens simultaneously on Panavision's OUTPOST lab cart. When automatically capturing ProRes or DNxHR proxy files alongside the 8K OCN, they match in filename, timecode, metadata and duration, and can speed up the workflow by opening the option to skip the transcode process altogether.

“DXL and DXL2 capture to a proprietary solid state hard drive that comes in half-terabyte and 1 terabyte sizes,” Michael said. “Using REDCode RAW, the 1 TB card can hold approximately 1 hour of 8K content and can be downloaded in 30 minutes. DXL shares the same download stations as RED Mini Mag readers, which are readily available, inexpensive, small, fast and bus powered.”

Because higher resolution shooting calls for more efficient, affordable storage, Panavision has licensed the REDCode RAW visually lossless compression codec from RED Digital and built it into DXL2’s image capturing architecture. REDCode was designed to keep the largest array of pixels possible, but keep files sizes at a manageable level.

Panavision finds that compression can still confuse many users regarding how it works and how it can be advantageous. “One of the reasons Panavision partnered with RED and licensed REDCode is because we believe that wavelet-based compression is the most efficient way to capture high resolution and minimize download and storage costs while maintaining a high 16-bit depth and the smoothness associated with 8K resolution,” Michael said.

“For the best images, REDCode in 8K mode will produce identical results at 1/5th the size of uncompressed images. But we don’t believe the benefits of 8K capture require you to view the final results in 8K. Viewing resolution is much less important than acquisition resolution and if you can capture an image at the highest resolution, its key elements will essentially always scale down to lower resolution outlets, even smartphones and other HD or 2K containers.”

This is why some cinematographers find that the ProResXQ codec in 2K mode is an efficient way to use DXL cameras and still retain the benefits of an 8K source. In this mode, the camera is set to 8K but, depending on the project, they disable REDCode and only capture images in Apple ProRes as an alternative compressed format. DXL can be used in 8K capture mode for framerates up to 60 fps. He advised that only when framerates higher than 60 are required should you use a lower source resolution.   www.Panavision.com