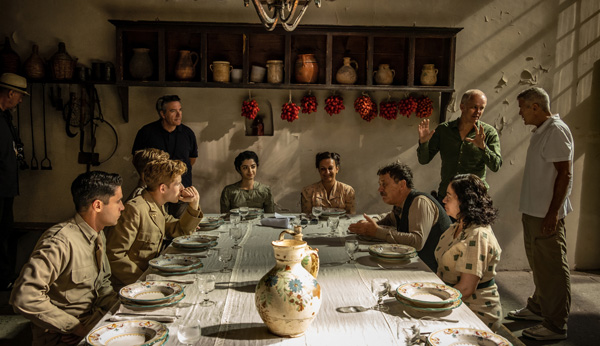 Cinematographer Martin Ruhe shot the miniseries Catch-22 on the ARRI Alexa Mini with Cooke S4/i prime lenses, working with directors Grant Heslov, Ellen Kuras and George Clooney. They recorded the series in six episodes, premiering on Hulu on 17 May.

For the producers, giving this production its own looks and personality, without reference to the 1970 film, was of primary importance. “We all looked at the original film, but the two projects have a different nature,” said Martin. “Ours is a dark comedy with a strong look for a strong visual story, as compared to the original which was more of a straight comedy. The aerial scenes had to show the intense horror of being up in those small tin boxes. It had to be about life and death.”

Martin’s goal was to contrast the horror of the aerial scenes with the absurdity of the story on the ground. To capture the characteristics he was looking for in the images, he shot with the ALEXA Mini’s Super 35mm 2.8K sensor, with 16:9 aspect ratio for televison, and used Cooke S4/i prime lenses in a range of focal lengths – 14mm, 18mm, 21mm, 25mm, 32mm, 40mm, 50mm, 65mm, 75mm, 100mm and 135mm. He chose the ARRI Raw codec for the show, which would later be finished in 4K HDR, taking advantage of the camera's 14 stops of dynamic range. 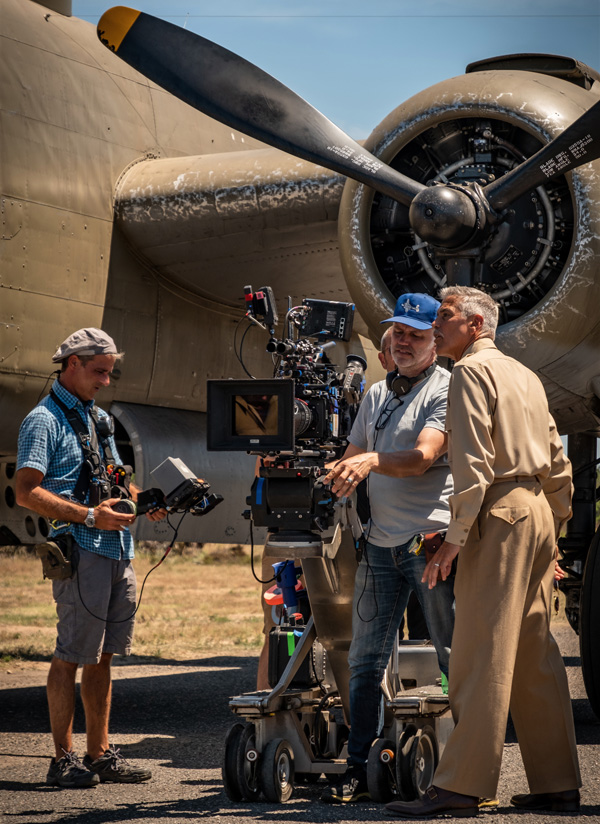 The entire series was shot in Italy, in line with the setting of the story that is based on the novel ‘Catch-22’ written by Joseph Heller recalling his own days in the American Air Force during World War 2. The shoot ran from May to August 2018, allowing 10 to 12 shoot days per episode.

“We actually used two ALEXA Minis matched with two identical sets of lenses because we were cross-boarding on some days, shooting with a splinter unit,” Martin said. “We would record scenes from multiple episodes within one shoot day at a given set. This can be harder on the actors and crew, who need to jump between different parts of the story and work with the different directors assigned to specific episodes, but is more economical for the production.”

The battle sequences when we see the soldiers onboard the B25 airplanes were not shot inside real, airborne planes but inside set pieces built to re-create the B25 fuselage, placed on a gimbal at Cinecitta Studios in Rome to produce the necessary motion. Martin climbed in with them to shoot these dramatic scenes, and said the 32mm Cookes were ideal for moving in very close to the soldier’s faces to capture their emotions and trauma. 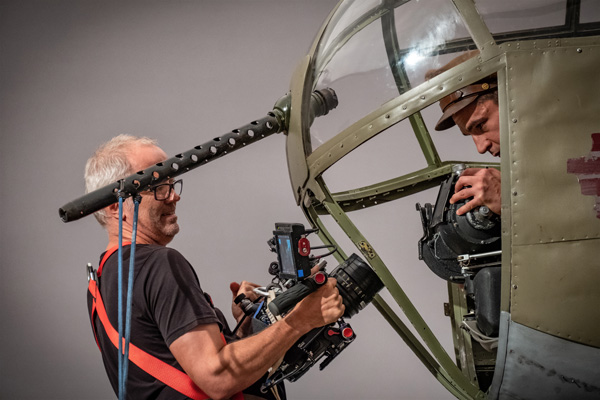 “The 18mm and 21mm were also good for shooting the interiors in the tight spaces. The Cookes generally have a short minimum focus and are useful such situations. Further to that, one of the main advantages of using Cooke S4/i primes was their compact size. I had to be very fast and versatile in tight places.”

The aerial photography, flown over Italy as well, was shot on the Alexa Minis with Optimo Zoom lenses - some footage was captured from a restored B25, some from a DC3, plus some from a helicopter. No camera rigs specialised for aircraft use were available in the area they were working from, so the crew shot from inside the plane itself.

For both the ground and aerial scenes, Martin went for a natural look. “On the ground, we want people to feel the heat of the day,” said Martin. “We worked with hard contrast, blowing out the sky when inside the tent looking out. I think this looked quite natural, as I wanted to convey the feeling of heat.” 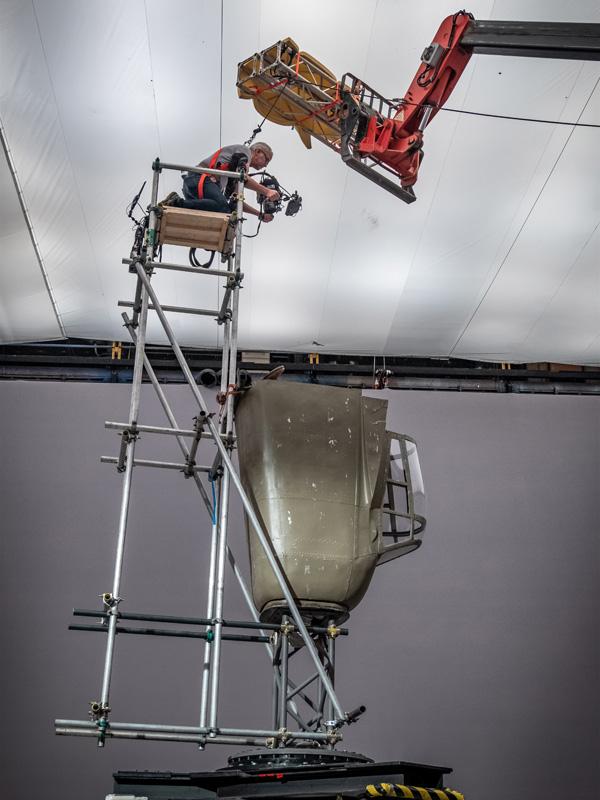 But, because they weren’t shot at a location like the other scenes, the sequences shot inside the fuselages brought a different lighting challenge, especially since Martin knew the VFX team at DNEG would be replacing the view out the windows in post with backgrounds created from the aerial footage. Instead of using blue or green screen during the shoot, Martin and VFX Supervisor Matt Kasmir surrounded the set piece with grey fabric sail and behind it, placed space lighting overhead and used a very bright 20K lamp to represent directional light from the sun.

To help convey the time and place properly, Production Designer David Gropman supplied the production with historical newsreel footage and still photos from Joseph Heller’s regiment to show the production what life in the camps had been like. “During the camera tests, I worked with the DIT on looks and also took my own still images around the locations and graded them with Photoshop and Lightroom," Martin said.

"With these images as reference the colourist, Stefan Sonnenfeld from Company 3, built a LUT that we used to monitor everything during the production – dailies, on set reviewing and so on – until the grading sessions when we used it as a starting point for the final look." 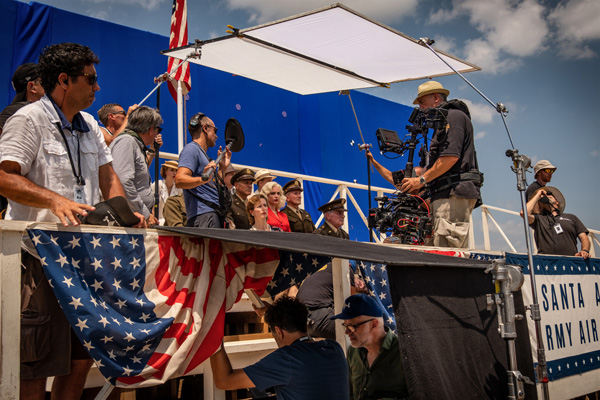 Martin has more than 20 years of experience with Cooke lenses, and knew from the start that he wanted the S4/i primes for this project. “I first grew attached to Cookes on commercials, and I shot ‘The American’ with S4s as well as ‘The Keeping Room’, where I also used original Cooke Speed Panchros,” he said. “For close-up work, the 32mm is the perfect tool, and all of the lenses are just beautiful in the way that they fall off, how they flare and the texture you get from them.”

“Lens fall-off doesn’t only refer to loss of light from the edges of an image but also to a small loss of focus in certain areas. Cooke lenses show that loss of focus in a distinctive, pleasing way, which is especially important when shooting with digital cameras. The Cookes give you a nice organic feel. What they choose to keep sharp and what they choose to blur slightly is very effective in the video image. I go back to them time and time again.”   www.cookeoptics.com