The new Blackmagic URSA Mini Pro 12K has a 12K Super 35 image sensor, 14 stops of dynamic range and high frame rate shooting at up to 60 fps in 12K at 80 megapixels per frame. It supports the updated Blackmagic Generation 5 Color Science and Blackmagic RAW codec.

URSA Mini Pro 12K’s capabilities recall shooting with film, not only in the high detail and resolution but also in the wide 14 stops of dynamic range and intense colour. Targeted applications are feature films, episodic television and immersive, large format IMAX. The precise definition around objects makes it suitable for work with green screen and VFX including live action and CG composites. Super sampling at 12K results in better colour and resolution at 8K, and also a smoother look due to removal of aliasing. 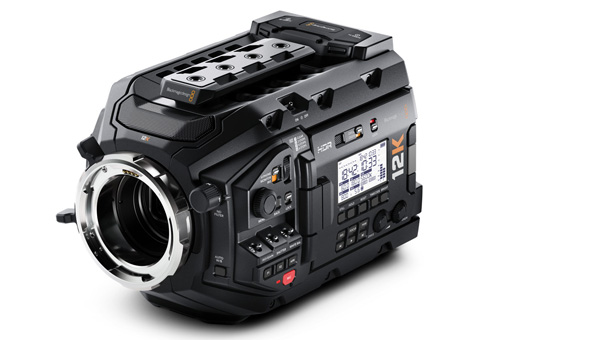 The Super 35 12K sensor has a native resolution of 12,288 x 6480, yielding 80 megapixels per frame, with a native ISO of 800. The sensor has equal numbers of red, green and blue pixels and is optimised for images captured at a range of resolutions. Users can shoot 12K at 60 fps or use in-sensor scaling to shoot 8K or 4K RAW at up to 110 fps without in-camera cropping or changing the field of view.

The URSA Mini Pro 12K sensor and Blackmagic RAW were designed together to support 12-bit RAW workflows. Shooting RAW in 12K preserves fine control of detail, exposure and colour during post. Oversampling results in extremely sharp 8K video without harsh edges. Even so, due to the efficiency of the codec, the video can be edited on a laptop. Users can work in any resolution in post production straight away, without rendering, and keep the sensor’s colour accuracy. In post, the high resolution shots can be reframed for delivery in 8K and 4K, or in vertical or square aspect ratios.

Blackmagic RAW has two types of encoding that preserve detail according to the scene you are shooting. Constant quality Q0 and Q5 options and new values Q1 and Q3, lock the quality level, allowing compression to adapt and match the changing level of detail of the scene. Constant bitrate encoding options 5:1, 8:1, 12:1 and the new 18:1 are useful when you need to produce the best possible images with a predictable and consistent file size. These settings work well for elements that maintain similar image values throughout the scene.

Blackmagic Generation 5 Color Science employs a new film curve, developed to take better advantage of the abundant colour data that the new 12K sensor captures. This data is evident in the camera’s colour response for more pleasing skin tones, for instance, and more accurate rendering of highly saturated colours in neon signs, car tail lights in high contrast scenes and so on. 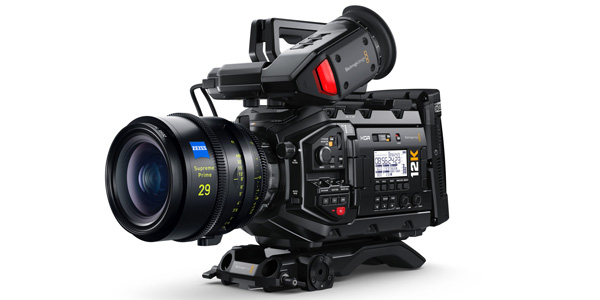 An interchangeable lens mount makes URSA Mini Pro 12K compatible with PL, EF and F mount lenses. If a project needs B4 lenses as well, they can be used on the URSA Mini Pro 4.6K G2 so that productions can work with large PL cinema lenses, EF or F mount photographic lenses and also B4 broadcast lenses, while stayng within the URSA Mini Pro camera group.

The 4-inch fold out touchscreen on the camera for monitoring and reviewing shots has a bright, high resolution colour display with a wide viewing angle. The screen can also overlay a heads-up display to show format, frame rate, iris, timecode, shutter angle, white balance, ISO and other information.

URSA Mini Pro 12K can record RAW to two cards simultaneously with dual built-in CFast and UHS-II SD card recorders, capturing 12K or 8K video at high frame rates. With Record RAW on 2 Cards turned on, the camera can record simultaneously across two cards up to 900MB/s to two CFast cards, or 500MB/s to two UHS-II SD cards. Included with the image data itself, Blackmagic RAW stores camera metadata, lens data, white balance, digital slate information and custom LUTs, all of which can be used to make sure images are consistent on set and through post production. 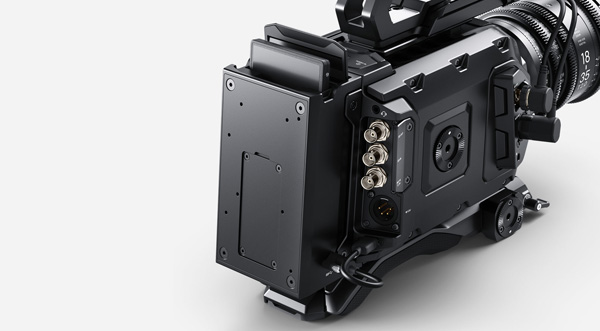 URSA Mini Pro 12K has three 12K recording options, a considerable issue because 12K video stores almost 10 times the resolution of UHD. As well as the two built-in card recorders, a SuperSpeed USB-C expansion port on the rear records to fast SATA and NVMe drives. As a third option, this USB-C port can record to USB-C flash storage up to 900MB/s. The 4.6K G2 model has USB-C 3.1 Gen 1 operating at up to 5 Gb/s, and the new 12K model has a USB-C 3.1 Gen 2 achieving 10 Gb/s.

External flash disks and SSDs can be connected and powered up or, on URSA Mini Pro 12K, users can connect the new URSA Mini Recorder for recording to fast NVMe SSD drives for longer recording times. According to Blackmagic Design, NVMe SSD drives are the best option when recording 12K in high, constant quality 12‑bit Blackmagic RAW in the Q0 setting, or for high frame rates. When the shoot is complete an editor can move the external disk to a computer and start editing from the same disk, without copying files.

Like other URSA Mini Pro models, Blackmagic URSA Mini Pro 12K includes a full version of DaVinci Resolve Studio. The camera will be available in July 2020 from Blackmagic Design resellers for US$9,995, and AU$19,745.  www.blackmagicdesign.com