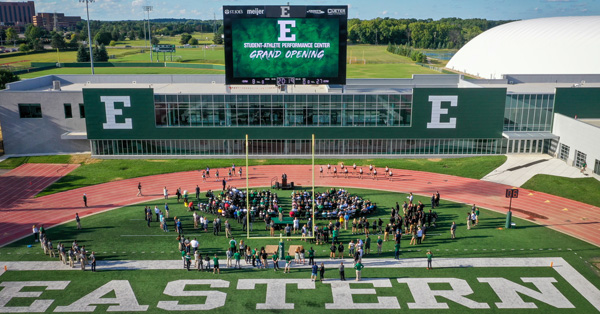 At Eastern Michigan University (EMU), the Department of Athletics aims to produce great experiences for both fans and student-athletes while looking after their students’ education in the classroom, in the community and in competition.

To upgrade its football venue with a massive new scoreboard in 2019, the university purchased four Z-HD5000 HDTV cameras from Hitachi Kokusai to improve fan engagement while meeting the challenge of shooting high-quality video on the stadium’s distinctive grey playing surface.

The main reason for the systems upgrade at the 30,200-seat Rynearson Stadium is the installation of the new Daktronics LED video display screen, measuring 53ft high by 29ft wide. The second-largest video board in the NCAA Division I Mid-American Conference (MAC), the new scoreboard is more than three times larger than the venue’s previous, lower resolution screen. The display overhaul was accompanied by control room and camera upgrades as EMU Athletics began producing football programming directly from the venue for the first time. 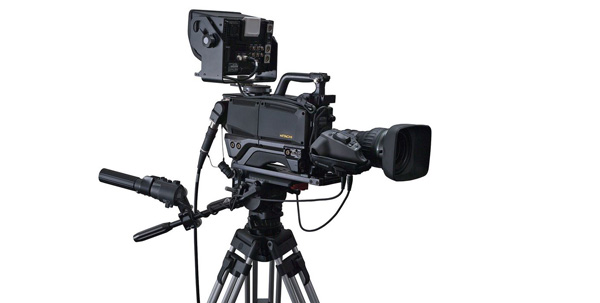 “With the old video board, we would just take an analogue signal from the broadcast feed and cut in occasional footage captured on older cameras,” said Greg Steiner, Associate Athletic Director, Media Relations at EMU. “But we need to bring the in-venue experience up to date because the fans are coming into the stadium and watching our video board with expectations that match what they see on television. Our goal is to produce and deliver on-site experiences that fans cannot access at home, while also delivering the quality they already expect from TV.”

Supplied by systems integrator AVI-SPL, three of the Hitachi cameras are deployed in fixed positions on tripods. The fourth Z-HD5000 is equipped with a Teradek wireless transmitter, enabling the camera operator to climb into the stands and roam the venue.

Greg noted that the Hitachi cameras do an especially good job of capturing games in EMU’s unusual football environment. “We’re one of only three Football Bowl Subdivision schools that don’t play on a green field, and have the only grey field at the Division I level,” he said. “Shooting a good picture against it can be tough when shooting with other cameras. Grey can look washed out very easily if you don’t have high-quality cameras and the ability to dial in directly to the true colours. The Z-HD5000s handle this challenge very well.” 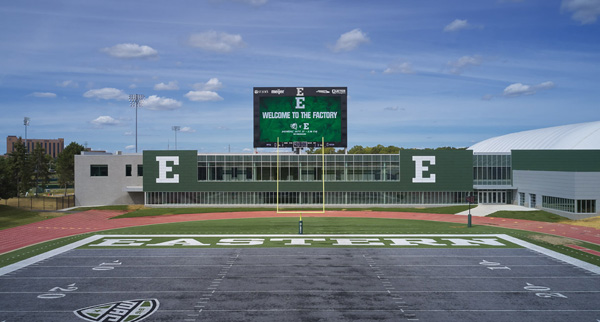 The four new cameras are the university’s second Z-HD5000 purchase, joining four units acquired in 2013 – still functioning as they did when new – that are dedicated to the university’s 8,000-seat Convocation Centre arena. As well as driving in-venue video board shows for the EMU Eagles’ basketball, volleyball and gymnastics events in that venue, the earlier cameras have been used on more than 185 live broadcast productions for the ESPN+ streaming service and cover other types of events such as graduation ceremonies.

Together, the new and earlier Hitachi cameras also create opportunities for hands-on video production experience for students in the school’s Communication, Media & Theatre Arts department, as well as students enrolled in other programs who are interested in sports production. “The Athletics Department has higher-end equipment than they may use in their own courses,” said Greg.

“Working on our productions lets them earn internship credit while getting experience on broadcast-class equipment that they may eventually use professionally. Furthermore, they can add to their resume the fact that they worked on productions for ESPN+, which helps improve their chances of finding work with the major networks once they graduate.”

Most important, EMU has been very satisfied with the visual quality that the Z-HD5000 cameras achieve, as well as their durability in students’ hands. “You know what you’re going to record every time you turn them on – great clarity, accurate colour reproduction, and the ability to dial in adjustments from the control room exactly as you need them,” Greg commented.

“Knowing that they are forgiving enough with students is a selling point for us as well. Some colleges use more prosumer-level equipment but because it breaks down more easily, their turnover of gear is faster than ours.” Beyond the technical aspects of the cameras, Greg described the possibilities they have opened for the school and its students. “The opportunity that working with Hitachi cameras has presented us as a university and as an athletic department is very valuable,” he said.

“Putting these cameras in students’ hands means we can deliver an opportunity for their personal development while creating a program that lets us showcase our student-athletes to our fans. Hitachi Kokusai has been a great partner throughout the process to deliver exactly what we needed in terms of video.”  www.hitachikokusai.com