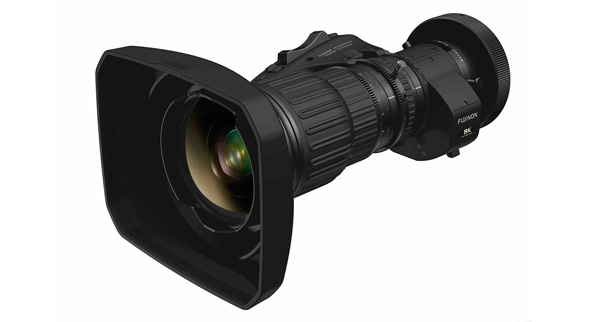 FUJIFILM’s new zoom lenses, the HP66x15.2-ESM and HP12x7.6ERD-S9 are designed to capture dynamic 8K video for broadcast applications. The HP66×15.2 is a box type zoom lens reaching the extreme focal length of 1000mm with a high zoom magnification of 66x.

The HP12×7.6 is a portable zoom covering a focal length range from the very wide-angle 7.6mm to 91mm in telephoto mode. Due for release in February 2021, the HP66x15.2 and HP12x7.6 will complete a line of seven FUJIFILM broadcast lenses built for 8K video production.

FUJIFILM says the lenses are a response to greater use of high-definition video in diverse productions, including live sports and performance projects and documentary programs. The company believes that, as more producers recognise the commercial value of 8K video, which has four times the resolution of 4K video, the market will need broadcast lenses with higher performance.

Earlier on, FUJIFILM was the first manufacturer to release 4K-capable lenses, and has now moved ahead to develop 8K-capable lenses. With a very high zoom magnification of 66x, the HP66×15.2 box zoom lens is capable of capturing critical sports moments from far away, for example. The HP12x7.6’s very wide focal length range and portable build are useful when capturing an entire stadium or concert venue.

Because shooting 8K video demands precise focusing, the lenses can be combined with the optional FUJINON EPD-51A-D02/F03 focus position demand unit to facilitate manual focus adjustments. For more stability, the lenses are built with high-performance optical image stabilisation, correcting image blurs caused by wind or shake without a time lag. Users can incorporate a natural bokeh into their video owing to the lens’ nine-blade diaphragm that forms an aperture shape close to a perfect circle.

The lenses come standard with a 16-bit encoder, a sensor that converts and outputs zoom and focus positions as digital signals, split in 16-bit precision. It is compatible with virtual studio software and other systems used to combine CG elements with live video footage.

These lenses also have the new Remote Back Focus function, used to adjust the back focus remotely, for instance, from a broadcast van. Back focus adjusts the distance from the rear surface of the lens to the focal plane, critical when focussing on very distant objects.

FUJIFILM attributes the ability of the HP66x15.2 and HP12x7.6 to resolve extremely sharp images, edge-to-edge, to precise polishing techniques applied to the surface of the lens elements, and to mechanical design – that is, accurate placement of multiple lens groups into the lens barrel during assembly. Their vivid colour reproduction and strong contrast result in fine tonal gradations in high dynamic range (HDR) video.

Aspherical and fluorite lens elements control image distortion and light fall-off at image corners as much as possible. The use of a floating focus system controls multiple lens groups according to the shooting distance. This approach minimises fluctuations in optical performance that occur as the shooting distance changes, and maintains sharpness across all shooting distances.

Proprietary HT-EBC (High Transmission Electron Beam Coating) is applied to lens surfaces to enhance light transmission – the amount of light from a subject that successfully passes through glass – for vivid colour reproduction and high contrast. This results in dense tonal gradation in HDR.  www.fujifilm.com