The new Blackmagic URSA Broadcast G2 is a broadcast camera for traditional and online applications, with a 6K digital film sensor and digital film characteristics such as low light performance with dual gain ISO up to +36dB, and 13 stops of dynamic range. The camera records ProRes, H.265 and Blackmagic RAW file formats and has Blackmagic generation 5 colour science.

The colour system also handles some of the complex Blackmagic RAW image processing, preserving colour and dynamic range data from the sensor via metadata for use in post production. The darker blacks and brighter whites recorded due to the 13 stops of dynamic range increase options when using colour correction to produce more dynamic, expressive footage. The URSA Broadcast G2 works with standard 17 and 33 point 3D LUT files, but it does have built-in LUTs such as Extended Video, Film to Video, Film to Rec.2020 and others.

The camera’s custom neutral density (ND) filters will quickly reduce the amount of light entering the camera, with 1/4, 1/16th and 1/64th stop filters specifically designed to match the camera's image sensor and colour science, enhancing latitude and colorimetry. The user can apply different combinations of aperture and shutter angle, accommodating diverse situations, and display the filter status on the LCD as a fraction, number or stop reduction. The IR filters have been built to evenly filter both optical and IR wavelengths, avoiding IR contamination.

The URSA Broadcast G2’s low light performance makes it possible to shoot under a wider range of ambient lighting, for example, moonlight. The gain ranges from -12dB (100 ISO) up to +36dB (25,600 ISO), optimising the capture quality to reduce grain and noise, while preserving the dynamic range of the sensor. Gain controls are accessed via a camera switch or the LCD menu, or remotely using the SDI remote camera control protocol.

The 6K sensor’s resolution of 6144 x 3456 allow enough flexibility for either broadcast or digital film work. When using B4 lenses, the camera sensor’s 4K window suits UHD broadcast applications and, by changing to a PL or EF lens mount, the full 6K resolution is available for digital film productions. 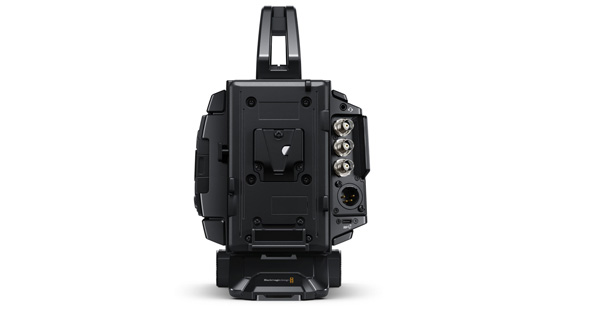 The B4 broadcast lens mount supplied with the camera incorporates optics matching the camera’s sensor, and supports modern Ultra HD lenses or lower cost HD lenses. Older HD lenses sometimes feature resolutions beyond HD, increasing their value, and B4 lenses are desirable because they are par-focal, maintaining focus as the lens is zoomed and the focal point (and magnification) changes. To use PL, EF, F and other types of lenses, the mount can be changed – a spare EF mount is included with the camera. Electronic lens control is also included, allowing focus, iris and zoom adjustment using the camera’s controls, or remotely.

Further to formats, the camera is designed to work with standard file formats, used generally by broadcast systems and editing software, recording ProRes 422 HQ and ProRes 422 into QuickTime files. For compressed files, users can record H.265 outputting images at 60:1 to 285:1 compression ratios, in 10-bit broadcast quality. Shooting Blackmagic RAW files is a further alternative, a format tuned to preserve the quality of the sensor data from the camera. In short, URSA Broadcast G2 users have a camera that suits most types of workflow.

The dual CFast 2.0 recorders and dual SD/UHS-II card recorders allow a choice of physical media. Both types are standard, inexpensive and readily available, and the dual slots give non-stop recording. When a card is full, recording automatically continues onto the next card, while the user replaces the full card in the inactive slot with an empty one.

On the rear of the camera, a high speed USB-C expansion records to external disks or connects to various accessories. For example, by plugging in an external USB flash disk, users can record ProRes, H.265 or 12-bit Blackmagic RAW files and remove the disk to a computer later on for editing and colour correction without copying the files over. Meanwhile the computer’s USB port recharges the disk.

For everyday HD broadcast work, where dynamic range and colour fidelity are less critical, the camera will scale the image sensor down to 1080HD video standards, which helps move stories on air quickly, in HD or UHD. The sensor also supports sub pixel image processing of HD video for anti-aliasing and sharpness.

The optional zoom and focus demands make it possible to use photography lenses for live production, and have USB-C connections for setting them up with the camera’s electronic lens control. Each zoom and focus demand also has two USB-C ports, allowing them to be daisy chained and then connected to the camera with a single USB connection. The precise design gives very fine lens control, allowing the user to frame and adjust the lens without moving their hands from the tripod handles.

A shoulder mount kit, V-Lock battery plate and top handle are included so that users don't need to purchase extra gear, but a range of other accessories is available specifically for use with URSA Broadcast G2. These include the Blackmagic URSA Studio Viewfinder built for tripod-mounted studio camera use with a 7-inch 2,000 nit display, tally light and accessible controls. 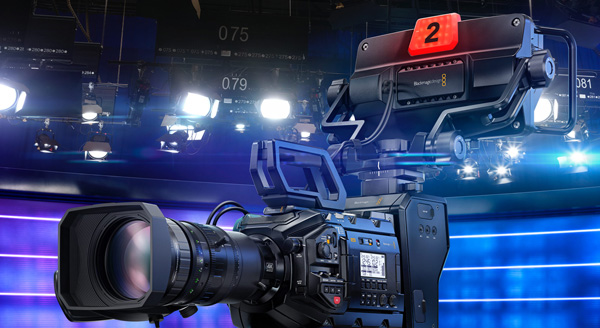 Using a standard V-Lock mount, it mounts to the top of the camera body – or the top of the SMPTE fibre converter if one is installed. The display has a metal sunshade and grip handles for positioning independently of the camera, even while the camera is on air. It can be tilted up and down and rotated sideways, with lock knobs to vary the tension on the adjustments.

The framing and focus are adjusted with the on-screen or separate physical controls, using a menu dial to scroll through menus and change settings. Especially useful are the three knobs on the right side of the viewfinder that control the LCD brightness and contrast, and adjust the focus peaking. The focus peaking control makes focussing very quick at the user’s chosen zoom setting. Finally, the viewfinder’s three customisable function buttons can be programmed to control features like zebra, false colour, focus peaking, luminance waveform, LUTs and so on.

The large tally light on the back of the viewfinder shines red for on-air, green for preview and orange for ISO recording. Once the correct camera number is set in the URSA Broadcast G2’s menus, tally information is sent back to the camera over SDI as the director cuts between cameras on the ATEM switcher, illuminating the light when the camera is on the air.

The tally light is one of the features that can be controlled over the SDI video connection. The Blackmagic SDI Control Protocol – which developers use to build devices that integrate with Blackmagic products – takes advantage of blanking space in the SDI data stream to add talkback, tally and other camera control information direct to the camera via the program return feed.

This feature also works with the viewfinder because it has the same control sent to it from the camera via SDI. The Blackmagic control protocol is an open standard and is documented in the URSA Broadcast and ATEM switcher manual. That means anyone can create custom applications for Blackmagic cameras, switchers and Blackmagic URSA Studio Viewfinder.  www.blackmagicdesign.com