AtomOne mini Zoom Brings Audiences Up Close to the Action 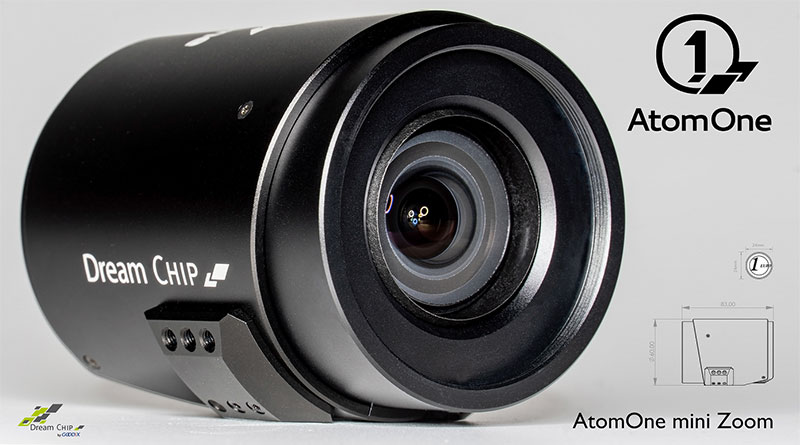 Dream Chip’s new AtomOne mini Zoom camera measures only 60x80mm and weighs 267g, has a 1/2.5in sensor with rolling shutter and achieves resolutions up to 1080p60.

The Zoom functionality facilitates shot reframing which, along with its small size, makes the camera especially effective for deployment in unusual, creative locations. The base aperture at F1.6 or 2.9mm, allows wide angle 130° shots, and allows the user to reduce the frame to a 66° angle shot at 9mm. With such a miniature size, the camera can be placed in nearly any location without intruding or interfering in the action, including race car bumpers and dashboards, drones, behind goals, on nets or at the edge of intense action.

The goal of the AtomOne camera range is to bring audiences closer to the action, delivering shots that capture emotion and energy more effectively than traditional cameras that must be positioned more conventionally. The exisiting lineup includes super-slow motion and underwater models. Now with the Zoom reframe ability, the images can become more dynamic by focussing on individual action components, facial reactions or emotive details.

Production teams are also able to maintain creative control over all elements of the shot more easily, as the AtomOne Mini Zoom supports remote full iris control and can be colour matched with other cameras in the production setup using multi matrix colour support.

The new AtomOne mini Zoom is also notable for its camera housing, which not only uses materials selected for robustness and a sleek appearance, but also determines all points of connection within the housing to reduce the risk of connection fatigue or failure. This is important due to the fact that the camera will often be deployed in conditions involving a high risk of impact or vibration.

As well as the Zoom function, Dream Chip have partnered with Bradley Remote to add the option for pan-tilt functionality, turning the AtomOne mini Zoom into one of the smallest PTZ cameras on the market. Not only useful in the sports market, this adds the potential to use the camera in fields apart from broadcast such as commercial, entertainment, religious and educational settings that need discreet AV recording.     www.atom-one.de