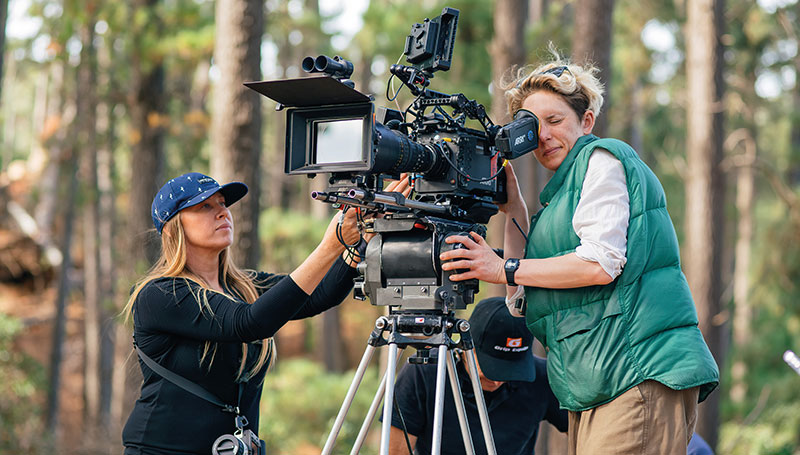 ALEXA 35 is built with 17 stops of dynamic range, giving 1.5 stops more in the highlights and one stop more in the shadows than previous ALEXA cameras, and keeps the naturalistic film-like highlight roll-off. Stray-light suppression in the camera and lens mounts allows the sensor to capture the contrast range and character of different lenses. The greater dynamic range combined with stray light control makes it easier to handle extreme lighting conditions on set, increases flexibility in post and makes the camera a better source for HDR projects.

Low noise and sensitivity settings ranging from EI 160 to EI 6400 also make ALEXA 35 a ‘high ISO’ camera able to capture effective images in darker environments, and to handle aperture and shutter speed settings with more flexibility. At the highest end of the range, an optional Enhanced Sensitivity Mode can be applied to settings between EI 2560 and EI 6400, producing a cleaner image in low light.

All of these factors -- high sensitivity, wider dynamic range and stray-light suppression -- allow ALEXA 35 to capture subtle nuances of light and shadow in more situations.

Aiming to take advantage of the sensor’s image quality and set up a faster, easier workflow, ARRI developed the new REVEAL Colour Science as a suite of image processing steps that ALEXA 35 uses internally and that is also available through third-party post-production tools for ARRIRAW processing. It includes an up-to-date debayering algorithm for cleaner compositing, a new colour engine for more accurate colour reproduction, a new wide gamut colour space for faster grading, and new LogC4 encoding to contain the increased dynamic range with LogC4 LUTs that improve colour fidelity.

While it is tuned to ALEXA 35’s new sensor, REVEAL Colour Science is also backwards compatible. ARRIRAW footage captured by ALEXA LF and Mini LF cameras can be processed with REVEAL, gaining the same advantages. This means that the ALEXA 35 and ARRI’s large-format cameras can be combined on set and can also share LogC4 LUTs in post.

The camera’s Super 35 4:3 native 4K sensor supports a wide inventory of existing lenses -- modern and vintage, anamorphic or spherical, Super 35 and large format. Filmmakers wanting to shoot with ARRI cameras while meeting demands for 4K now have a much broader choice of lenses.

The ALEXA 35 includes a new feature that gives cinematographers much more freedom regarding the way the camera records images. Up until now, ALEXA cameras have been pre-programmed with a default texture that determines the amount and character of grain in the image, and the amount of contrast at different levels of detail, factors affecting visual sharpness. Now however, ALEXA 35 adds the option to choose from a menu of ARRI Textures, similar to selecting a film stock.

A total of 19 recording formats, incorporating in-camera down-sampling and anamorphic de-squeezing, are available, which productions can use to optimise the camera’s data rate, resolution and other parameters to match most requirements. For units shooting mixed reality and virtual productions, the camera can record lens metadata in all common standards and output real-time streaming metadata to ARRI’s Live Link Metadata Plug-in for Unreal Engine.

Ease of Use and Accessories

For the ALEXA 35, ARRI designed the features and processing power of a larger-format ALEXA into a Mini-sized body. It has a simple menu structure, support for 1TB and 2TB Codex Compact Drives, and a MVF-2 viewfinder, now with HDR. For speed and ease of use, a new left-side display, colour matching, pre-recording, additional user buttons and so on have been added. Pre-recording continuously captures a cache of footage before recording starts. When shooting sports or wildlife, for instance, this function records several seconds before you press the start button.

ALEXA 35 is supported by ARRI’s suite of online tools, and also free-of-charge standalone apps like the iPhone/iPad Camera Companion App, ARRI Reference Tool and ARRIRAW HDE Transcoder. The camera is temperature resistant, splash and dust-proof for robustness and reliability on set. In terms of product cycle and return on investment, it was conceived to accommodate future hardware and software updates.   www.arri.com