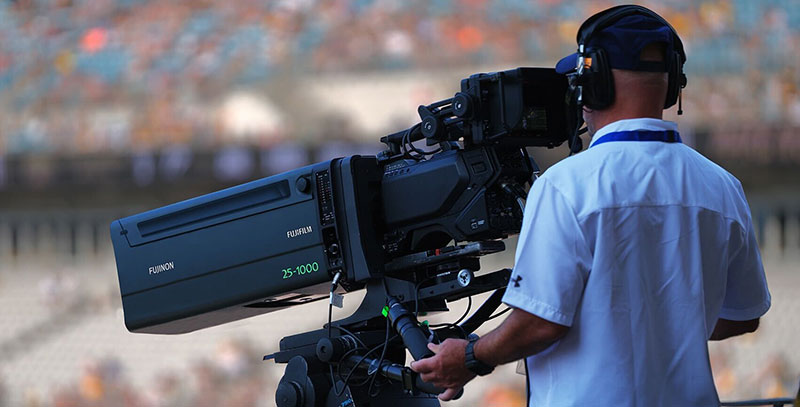 The FUJINON HZK25-1000mm broadcast zoom lens achieves an extremely high 40x zoom and long focal length of 1000mm. A box-type lens supporting two types of large image sensors, it can be mounted on cameras built with either a Super 35mm sensor, or the larger 35mm full frame sensor.

The HZK25-1000mm lens’ optical performance exceeds 4K and can be used with cinema cameras. Such cameras are now used more commonly for broadcast as a means of adding visual expression such as shallow depth-of-field for an attractive bokeh in the backgrounds of live sports and music event coverage. Cinema cameras also generally feature high dynamic range.

However, optimised for shooting movies and TV commercials, cinema camera lenses typically have a smaller zoom magnification ratio than broadcast lenses and may also require a specialist in focus operations, which most broadcast projetcs wouldn’t include. For these reasons, demand has emerged for a high-magnification zoom that supports a large sensor and can be operated in the same way as box-type broadcast lenses.

The lens normally works with the Super 35mm sensor, but also has a built-in expander that increases the image circle by 1.5 times, extending the focal length to the telephoto side. In other words, it covers a 28.5mm image circle across the entire zoom range when used with a Super 35mm sensor camera, and covers a 41.3mm image circle across the range when mounted on a camera with a sensor equivalent to 35mm full frame. A further advantage is its ability to maintain the same angle of view in both sensors.

On the wide-angle side, the lens has a F2.8 aperture, responsible for the shallow depth-of-field and bokeh. FUJIFILM’s optical design software FOCUS, developed to help designers determine the best glass materials to use for specific lenses, was used to simulate how the background is rendered out of focus. Out-of-focus areas were separated into several layers to examine bokeh textures, resulting in bokeh that naturally goes out-of-focus from the focal plane into the background, allowing the subject to stand out.

When mounted on a cinema camera, the lens can still be operated with a zoom demand, focus demand and various other accessories normally used with FUJINON box-type lenses. It also supports multi-camera operations. The lens’ image stabilisation mechanism is based on FUJIFILM’s ceramic ball roller system to accurately compensate for on-set vibrations and wind-induced movements.   www.fujifilm.com