Cooke Anamorphic/i S35 SF Lenses Pull Stories Together for Panic! At The Disco 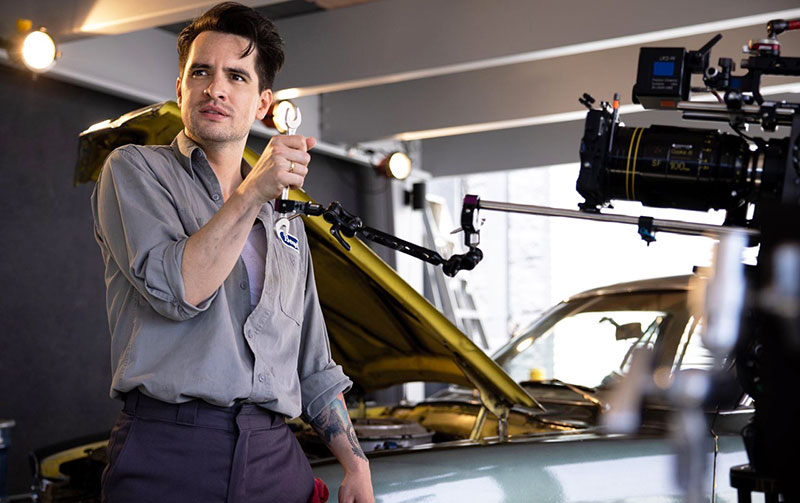 Panic! At The Disco’s new album Viva Las Vengeance features the work of cinematographer Eric Bader and director Brendan Walter, who took on the job of creating and producing the music videos that would make up the different acts of this rock opera. With 12 songs on the album and a tight deadline, Eric and Brendan decided to pare down their part of the project to a more manageable six videos, shot on a Sony VENICE camera.

“Singer Brendon Urie sent the entire album to our director Brendan Walter in January. They pitched ideas back and forth, and created an overall treatment and look book for the videos,” said Eric. “All of us wanted each video to stand on its own, to have its own voice and capture the song in a way that serves that particular song best. But meanwhile, there’s a central theme throughout the videos – creative burnout, which is also a main theme of the album. Along with it, we had a loose, love-story narrative that carries through from the first video to the last.

“For five of the six videos, I wanted the same set of lenses – the Cooke Anamorphic/i S35 Special Flare primes. We would be shooting with different aspect ratios and different sizes for the sensor, which gave us completely different looks. But the lenses tie those looks together, even with different locations and styles. That unified look comes from a uniform lens set and sensor.”

Eric and Brendan have been collaborating for years on a variety of projects following their first one – a low budget video for Panic! At The Disco eight years ago. “As well as three other videos for Panic, Brendan and I shot a feature together, some shorts and plenty of music videos for other bands,” said Eric. 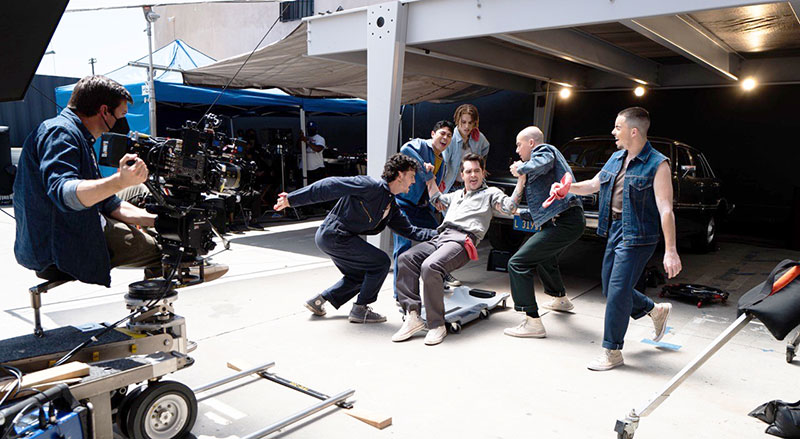 “We have similar tastes and like to work on similar kinds of projects, and we are always looking to include as many varied influences as possible. For this project, it was a race to see who had the most ideas for the six videos, and to then squeeze them all in. Each video was planned to a T, but we were always open to new ideas on-set.”

Eric had used the Cooke Anamorphic/i S35 SF lenses before, and even thought that he might have used the exact same set on an earlier project. “Cooke lenses are always flattering and reliable,” he said. “We knew we would go with the Cooke anamorphics, but we debated between the 2x S35 [2.39:1 aspect ratio] – my tried and true anamorphics – and the 1.8x full frame. I looked up the overall coverage circle and proper projection coverage for full frame on the Sony VENICE, and I also had done some experimenting on a previous project.

“In the end, even though the lenses weren’t designed for full frame, I loved the idea that they could take on a different life by pushing their coverage limits on some of the videos, as each video needed to have its own look and feel. So, the S35 it was.”

Eric’s set included the 25mm, 32mm, 40mm, 50mm, 65mm MACRO, 75mm and 100mm lenses, supplied by Shadowcast Pictures of Van Nuys, California, which also supplied the Sony VENICE. He used the 65mm MACRO primarily as a macro lens, which can be seen in Don't Let the Light Go Out, and mainly relied on the 40mm lens for most scenes. 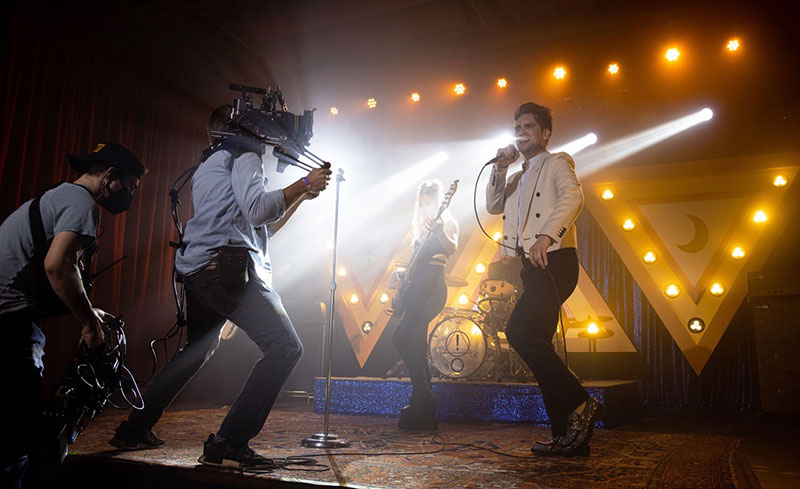 “On the anamorphic side, you can really see the dreamier effect you can get in Do it to Death,” said Eric. “I especially love the extra character that the special flare lenses add. I don’t find the SF too heavy or sci-fi like, which is a concern with a flaring lens. The Cooke Special Flare gives more of a natural, vintage type of flare. I always like putting them up against a broader source like a bright window. For instance, in Sad Clown, you get great halation and a softer flare.”

When watching through the videos of the album, a viewer will notice two things almost immediately – they all look different, but none of them seem to look like typical video. Both of those qualities are by design.

Referring to the variation, Eric said, “We shot in lots of different ways. Using the different sensor sizes and aspect ratios to pull off different looks, we go from super clean, perfectly traditional 2.39 [Middle of a Breakup] and 4:3 [Viva Las Vengeance], to 6K with the full sensor for extra funk and falloff. You can see that last look in Do It To Death, and Sad Clown – while having an optimised centre, you have that soft dreamy effect on the top and bottom. We couldn’t have achieved that without the special flare lenses.” 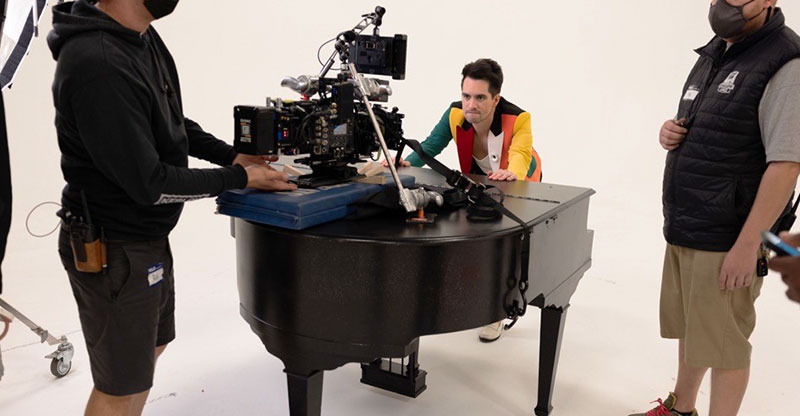 The reason that these videos don’t ‘look’ like video is because they all went through a film in/out beta process at FotoKem called SHIFTai – where ai stands for analogue intermediate. “After editing, everything was printed to film and then back to digital,” said Eric. “We did 35mm, Super 35mm, and sometimes windowed our output down to Super 16mm for more pronounced grain and even Super 8mm for a newsreel effect.

“Originally, we had thought of shooting everything in Super 16mm, but couldn’t have done that with our 2-1/2 week delivery window for the first video. But FotoKem’s SHIFTai processing could be completed in two days and gave us a similar patina, despite very different shooting styles.”

Eric’s use of the 40mm Cooke Anamorphic/i S35 SF would make the shots in Sugar Soaker possible. “These were mostly Steadicam single-shots that were cut up in post, adding rhythmic edits to what started as an unbroken take,” he said. “We open on Brendon getting out of his car and follow him into a house party, iris racking indoors and out, and going from T8.5 to fully open in the house and then back to an 8.5 in the backyard. All of this was possible because of the performance of the lens.” 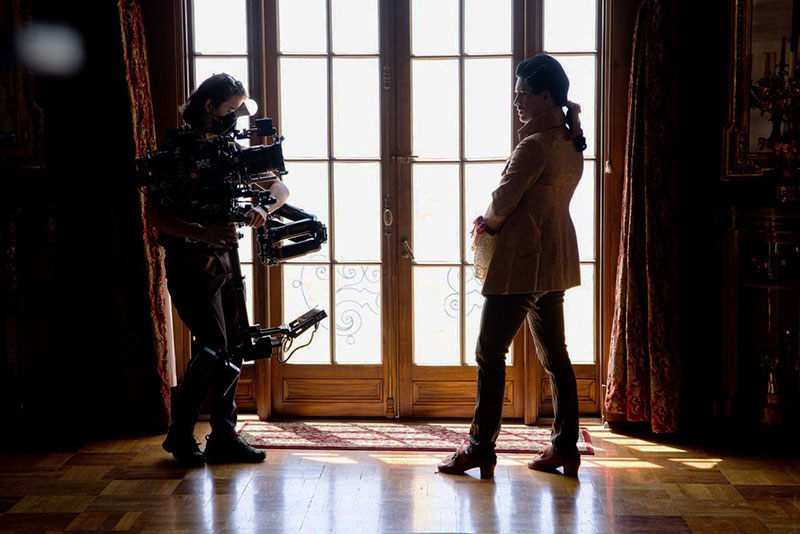 For Do It To Death, Eric also used the 40mm lens, in this case to pull all of the shots together. He starts handheld backstage at a nightclub and does a walk-through that eventually stops with Brendon, getting ready for the show. “All through that one take, we’re moving through different lighting environments, with many colours, visible sources and varying contrasts, keeping the aperture wide open for an overall look with a more extreme focus falloff that ends with Brendon in a beautiful shot. We relied on one lens to do that and make it all look good.”

In the end, he summed up using the Cooke Anamorphic/i S35 Special Flare primes by saying, “It’s a lot to go through, five videos. I’m always happy with those lenses. If you can rely on one set across an entire suite of videos...that says it all.”

The supporting music videos for Viva Las Vengeance are available on Panic! At The Disco’s official YouTube Channel.    www.cookeoptics.com