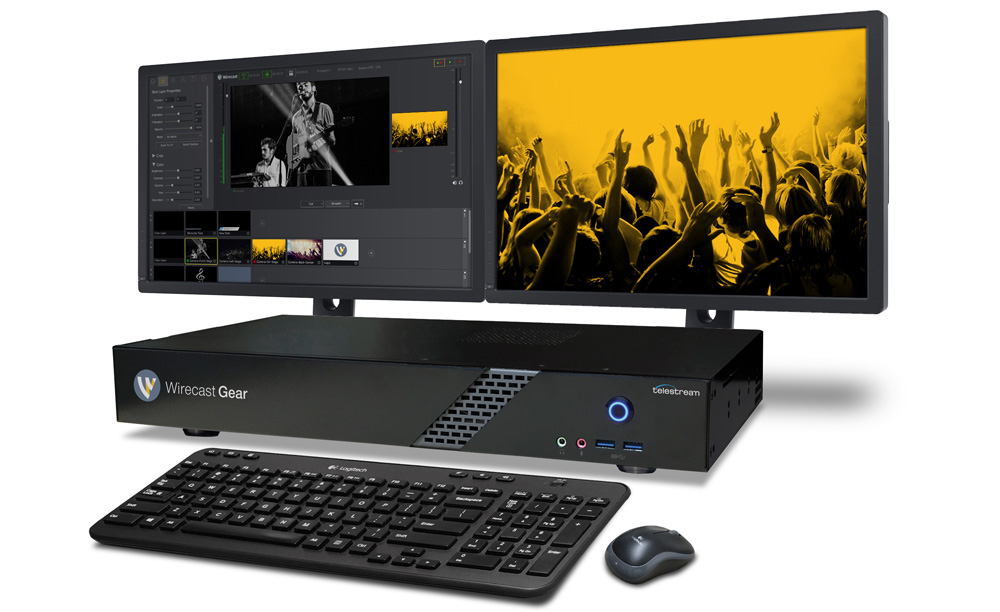 Telestream Wirecast Gear is a portable computer workstation specifically configured for live event production and streaming with all tools required to broadcast live productions very quickly. It avoids the work of building up a compact enough system with the correct specifications and supporting software. It comes installed with Wirecast Pro live streaming production software, Switch Plus software used to play, inspect and correct media files, and NewBlue Titler Live to create or edit animated titles and lower thirds. Users can load other software onto the system as well to customise their own workflow.

Wirecast Gear comes with four professional video input ports with options for either HDMI or SDI, housed in a compact hardware system. At 9.85 inches deep and occupying 1.3 rack units, the Wirecast Gear workstation can be packed into a travel case or fitted with its included rubber feet and placed on a desktop. Solid state drives, as opposed to traditional spinning hard drives, makes Wirecast Gear suitable for transport and less prone to failure, and increases performance.

Wirecast Gear is built on a Windows 10 Pro 64bit platform with i7 Intel processors, 16GB of memory and a system drive ranging from 250GB to 2TB of storage so that it can also be used as a workstation. The unit has several network connectors, keyboard and mouse, USB-C ports and digital display outputs to set up a production environment. Once it is unpacked and placed on a desk, cameras can be plugged in, and the user can start streaming a live event.

Other Wirecast functionality includes multi-camera live switching - mixing live camera sources as well as video, images, computer desktops and others. You can set up instant replay and playlists, and use built-in titles, virtual sets with CHROMA key support, live scoreboards and other graphic elements.

Also released is Wirecast GearCare, software that extends Warranty and Support for Wirecast Gear to three years and includes Wirecast/Switch Premium support for direct access to Telestream technicians, Next Day Air advance replacement should the system fail, and access to updated versions of the software.  www.telestream.net