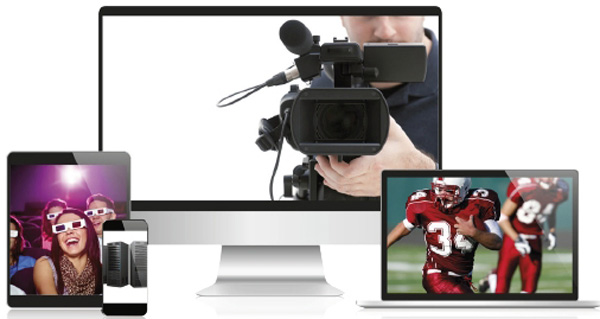 Village Island, a video equipment supplier and integrator in Japan, has built a new appliance for UHD transport powered by the TICO high-efficiency compression engine from intoPIX. Named VICO-4, the device makes it possible and practical to transport 4K baseband video over a single 3G-SDI connection, without a visible loss in video quality and with frame delays of a few microseconds [millionths of a second].

The VICO-4 Encoder takes in 4K video as 4x 3G-SDI or 1x 12G-SDI and converts it into a single 3G-SDI signal. The unit can be switched between encoding and decoding functions. Its use of TICO supports 4:1 visually lossless compression with a total delay (encoder plus decoder) of only a few video lines, representing less than 1 millisecond [one thousandth of a second].

Although broadcasters are aiming to adopt 4K video and workflows, they still need to make use of their current SDI facilities. The 3G-SDI code-stream signal resulting from the VICO-4 can be interfaced with traditional 3G-SDI uncompressed devices such as distribution amplifiers, storage/playout systems, optical transmitters, matrix-switchers and routers, and so on.

VICO also meets broadcasters’ preference for transporting video as raw data, or at a quality equivalent to raw, and with near-to-zero delay. It is supplied ready to integrate into OB trucks, studios and contribution systems, and may help with 4K SDI cabling issues relating to limited space and distance between devices. When IP is not an option or when the existing IP network is inadequate, or introducing constraints or complexity, the VICO hardware can be configured in-house without extra peripherals or software to supply a practical SDI connection. 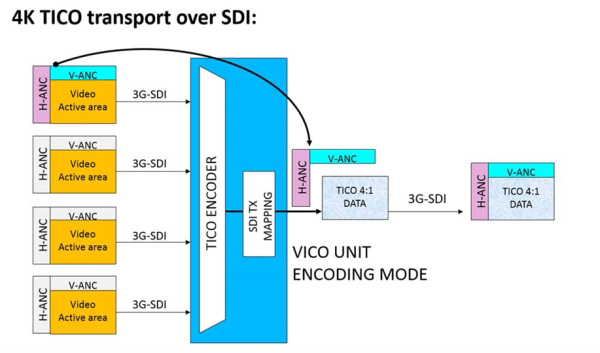 The VICO-4 handles 4K video as 4x 3G-SDI in both 2SI (2-Sample Interleave) and SQD (Square Division) modes, in Level A and B. These two modes arose when broadcasters started moving to 4K before standards defined how such content should be carried. Square Division splits the 4K picture into four HD quadrants, and carries them on four synchronized SDI signals – four times HD-SDI for 4K at up to 30 fps, then four times 3G-SDI for 4K up to 60 fps.

Later, SMPTE introduced standards defining a method for mapping a 4K picture onto four HD sub-images using two-sample interleave division, so that each of the four sub-streams carries on a quarter-resolution picture. The new standards still use 4x HD-SDI signals for 4K up to 30 fps, or 4x 3G-SDI signals to carry on 4K up to 60fps.

As SDI speed evolved, those quad-link mappings can now be replaced by a dual-link 6G-SDI equivalent, or even by a single 12G-SDI connection. The VICO-4 also supports 12G-SDI, in effect making it a gateway for new 12G-SDI devices.

The SDI transport of TICO video data is carried out according to the SMPTE RDD 35 specifications for interoperability with third-party vendors that follow the same specification. Village Island says that they have successfully conducted several interoperability tests. According to its specifications, the resulting 3G-SDI code stream replaces the SDI video active area with the 4K compressed data. The complete ancillary data – for example audio, time-codes, sub-titles and proprietary information - is transported as it is. Meanwhile, intoPIX TICO visually lossless compression preserves the original video quality without detectable artefacts, and within a few video lines of delay. www.intopix.com