Spanish TV and radio broadcaster RTVE recently took a new approach to production of a live concert for Radio 3 from Madrid’s Casa America palace. The event, featuring top Latin American performers, was mixed and distributed as a multi-camera event entirely within the cloud-based TVU Producer live production platform. From TVU Producer, the sources were synchronised, then mixed, graphics added and the signals distributed directly to RTVE’s broadcast and digital networks.

“Innovation and experimenting with new formats is essential to run media outlets like Radio 3,” said Tomás Fernando Flores, Director of Radio 3. “As a public station, our programming is dedicated to supporting culture, creativity and quality music.”

Carmen Perez, Subdirector of Innovation and Strategy at RTVE, said, “For some time, we have been trialling new mobile phone systems to find how best to broadcast via the cloud. We serve as scouts for the TV industry, aiming to try out new systems that our colleagues can then use.”

Radio 3 has now started to produce concerts live, in most cases with a mobile production crew. “Producing concerts this way reduces costs considerably,” said Jorge Alonso, Producer at RTVE. “Being able to rapidly set up a multi-camera team is a big advantage. We show up, set up the cameras and transmitters and we can be ready to broadcast on various social networks and other sites via the internet.”

Carmen also said that a quick set-up is what they need for such events, as well as having all devices synchronised, and the ability to produce events in the cloud. She indicated that this means the producer doesn’t need to be at the venue, or even at the station. “Producers can be anywhere with a good signal – that is the essential factor for our work and supports the production of many more such shows.” 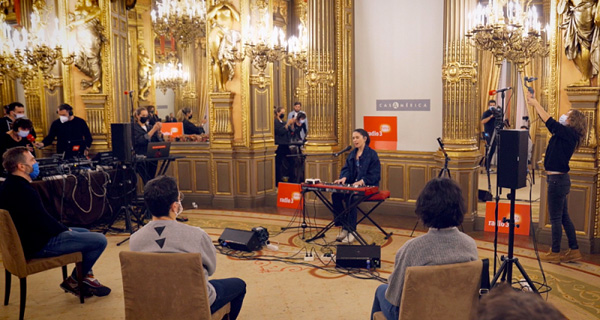 Cloud-based live video production involves storing and accessing a production workflow over the internet instead of locally on a PC. Being cloud-based means the production can be accessed anytime, from anywhere. No downloads or locally saved files are required, and users are not relying on a single system.

They have been using TVU Producer for the shows, plus the TVU Anywhere app with three mobile phones and one TVU One transmitter, all of which are linked directly to Producer. As a result, they have four live signals automatically synched in Producer and, from there, can manage the social networks, video mix and the graphics. They have also been able to directly broadcast the streams on social platforms.

TVU Anywhere is able to use smart devices to transmit full-HD live video from cameras – including mobile phones – at remote locations using cellular bonding and HEVC encoding. TVU Anywhere connects to TVU Producer, so that any captured content can be sent directly to the cloud to be produced and distributed. A studio operator could also use TVU Anywhere to control cameras for focus and brightness, frame and zoom, from a remote location.

“For this type of broadcast it’s essential for us to synchronise several sources at once,” Carmen said. “Our sources aren’t always the same and can’t always be synched on site, so a system that can synch and produce at the same time is essential. Low latency is also really helpful because it makes location less of a limitation – it allows us to be exactly where we need to be.

Pushed to the Limits

RTVE’s latest effort has been to carry out a mixed broadcast – 16:9 and vertical – in order to upload video onto Instagram and the other networks in the appropriate formats. The platform’s 9:16 Vertical Video feature allows users to simultaneously produce a live program in landscape and portrait mode. TVU Anywhere, serving as a multi-channel IP video switcher, automatically synchronises TVU Producer’s output to all receiving devices.

They have also successfully delivered an SDI signal to TV station Television Española, where it was broadcast live on their 24/7 channel. The TVU Producer platform is unusual for its ability to distribute a live event to any output from the cloud with almost no latency. 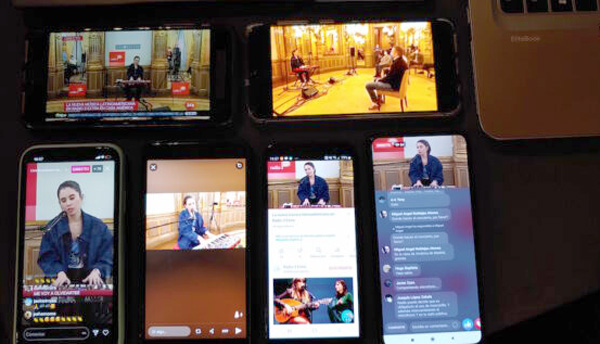 “I think we have really pushed this system to its limits, connecting all the signals it is capable of managing,” Carmen said. “For the first time, we have managed to reach all the social networks at once, plus the 24/7 channel.”

This concert also marked the first time a 5G mobile transmitter was used for a live stream in Spain. The multi-camera signal from the recent Radio 3 concert was acquired with a traditional broadcast camera equipped with a 5G TVU One mobile transmitter and the smart phone / TVU Anywhere workflow described above, for fixed and moving images. The TVU One unit was equipped with six modems – two supporting 5G and four supporting 4G/LTE networks. The audio from the radio broadcast served as the only audio reference, and was distributed to all devices and broadcasts of the coverage.  www.tvunetworks.com