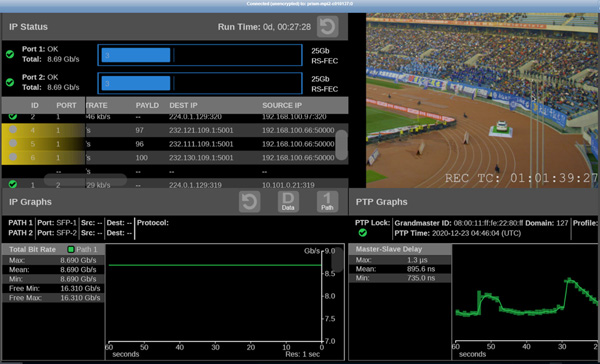 CCTV has been upgrading its studios to 4K/UHD specifications with IP connectivity over the last several years. CCTV’s resulting IP network is more versatile and simpler compared with traditional SDI networks. However, with an IP network at the scale of this test, some challenges exist.

If 8K signals up to 33Gbps are transmitted across the IP network, issues can occur such as packet loss and disorder, separate video, audio and uncertainty about whether all the auxiliary data is present. Also, the main and backup signals may not be consistent, and it may not be possible to lock PTP clock synchronisation.

As all these issues need to be considered and resolved to ensure high-quality, high-volume broadcasts of 8K signals, close monitoring is used throughout the production and distribution workflows. The test broadcast on 1 February used Telestream’s 2110 IP system including its Inspect 2110 IP monitoring system, PRISM waveform monitor and SPG8000A precision multiformat video signal generator, suitable for master synchronisation and reference applications.

In 2022, CCTV will start broadcasting 8K UHD channels in the run-up to the Beijing Winter Olympics, and plans to implement 8K UHD as the standard production format for the Games, including full-time comprehensive 8K Telestream live monitoring from content production to editing and broadcasting.

CCTV is using Telestream’s Inspect 2110 and Prism monitors to monitor IP 2110 8K signals in real-time around the clock. Telestream supplies IP 2110 network health protection and automatic alarm functions, and checks the consistency of the main and backup channels. 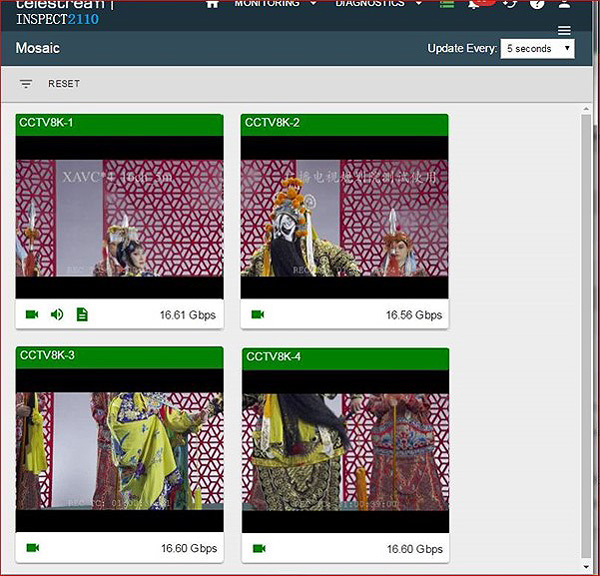 The Inspect 2110 probes monitor and record multiple RTP indicators in real-time – even the smallest amount of packet loss and disorder that cannot be detected by the naked eye – to give early warning and record IP network problems. The system also compares the main and backup signals, confirms PTP system synchronisation and can accurately identify any inconsistency in audio and video content and auxiliary data, alerting the operational staff.

When the staff encounter a serious issue, Inspect 2110 maintains a direct link to PRISM for in-depth diagnosis and analysis of the problem video stream, which shortens the network troubleshooting time and ensures the health of CCTV’s 8K broadcast system. www.telestream.net