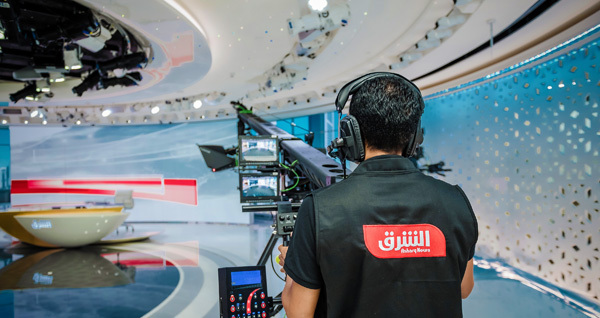 Asharq News multiplatform economic and political news service was launched in November 2020, and became one of the first projects in the MENA region in which the media infrastructure is based entirely on an IP system. Virtualised on-premises systems and cloud applications also play a central role as a hybrid architecture for content aggregation, production and distribution.

Initiating the launch was an exclusive content agreement between Bloomberg Media and Saudi Research and Marketing Group (SRMG), supporting a key component of the service titled ‘Asharq Business with Bloomberg’. Asharq News is headquartered in Riyadh with central offices in Dubai International Financial Centre in UAE, and Washington in the US, and hubs and studios in Cairo and Abu Dhabi, in Arab countries, major cities in other regions, as well as access to Bloomberg’s worldwide network.

A winner of the BroadcastPro ME Innovative Project of the Year award, and nominee for the Excellence in Technical Installation and Supplier Innovation award in the Digital Studio ME Awards, it features many new developments in broadcast components and is among the few SMPTE ST 2110 compliant stations operating in the region.

Asharq News’ goals for the development of its media centre are ambitious. As a pure IP deployment, the Asharq News project illustrates the efficiency and flexibility of IP systems as a means of establishing new broadcast channels. Systems architect Qvest Media designed and built its hybrid architecture, incorporating the company’s editorial and creative work into the set and studio design. (See more about this architecture here.) 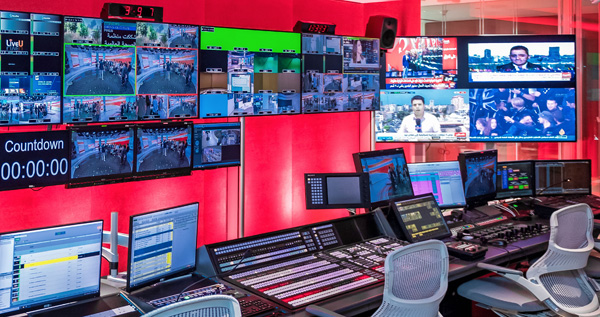 At the centre is a transmission pipeline with a large number of inputs and outputs, featuring about 80 ‘flows’ of video, audio and ancillary data per integrated channel device. 2110 inputs can come from any source – studio, camera or remote – while outputs include the main program output, dedicated outputs for YouTube with and without graphics, clean outputs for monitoring and so on.

Ashar has adopted the Pebble Integrated Channel, integrated as a standalone device into the multichannel system, replicating in software the functionality of a traditional broadcast playout chain made up of single-purpose devices performing dedicated functions. With video server, master control switcher, subtitling, captioning and channel branding functionality, it can be customised for channel types from precisely scheduled static channels to responsive channels with varying content formats, complex graphics and live inserts.

It also works as a component in hybrid channels that deploy dedicated equipment such as graphics devices, which gives Asharq News the opportunity to optimise the configurations for each channel. Regardless of the associated equipment at each site, the operators will still see the same UI across the entire system. 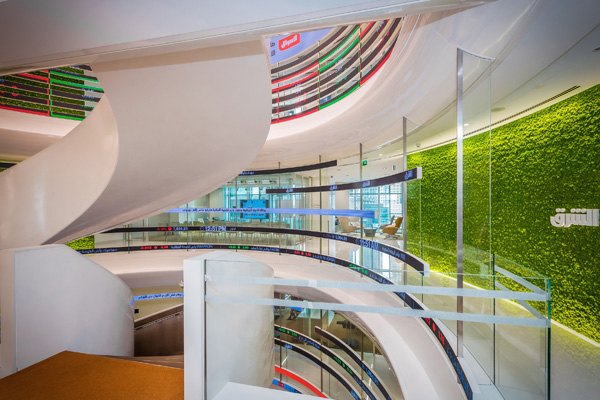 Vizrt’s Viz Engine for graphics is integrated into Pebble’s integrated playout systems via a software plug-in that uses a GPU, making it unnecessary to pass video signals between disparate devices, which could put pressure on bandwidth in an IP environment. The plug-in also reduces the amount of hardware required to run a channel while supplying a full graphics workflow. (See more about graphics at Asharq News here,)

VSM integrates directly with the broadcast equipment, including third-party video routers, video switchers, audio routers, audio consoles, multi-viewers, intercoms and modular equipment. By using their native protocols where possible, equipment from different manufacturers can be directly ‘glued’ together, resulting in system-wide recall and logic control possibilities. Because of its TCP/IP backbone, VSM can use standard IT hardware and make all parts of the system redundant through software. 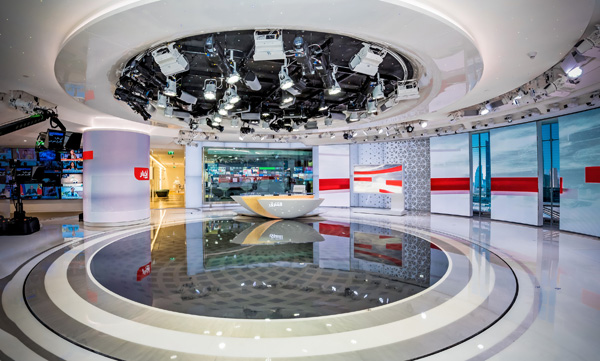 To allow frequent changes to the studio floor setup, VSM’s new wallboxing functionality allows devices to be moved across an API-controlled IP infrastructure and maintain flow connectivity. Existing IP links are re-established when a device is connected to a switchport at the new location.

“The flexibility of the SMPTE 2110 approach meant we could iterate rapidly and adapt the workflow to meet our needs,” said Omran Abdallah, Engineering Director at Asharq News. “We were already on air when subtitles were added to the chain within a day- ensuring no impact to our seamless on-air performance. In a traditional hardware implementation, that would likely have taken weeks to achieve."

All changes to the system installed at Asharq News can be undertaken via a single user interface, ensuring the channel has an agile set up that is both responsive to market needs and valid into the future. Samir Isbaih from Pebble said, “Asharq News’ integrations and features do more than mirror SDI deployments in a much smaller footprint. They show the flexibility of IP-based workflows to continually re-invent themselves and lend the agility the current market demands from broadcast channels.”  www.pebble.tv