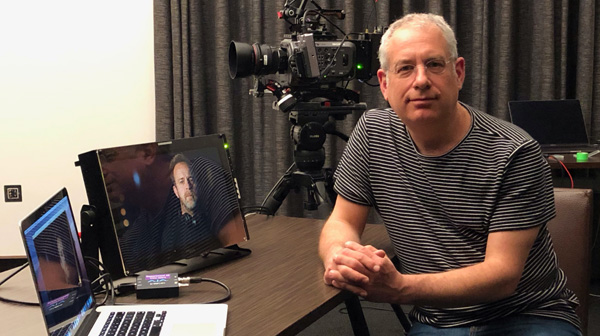 DoP Michael Sanders in the UK was already in a good position for shifting to dispersed productions and working remotely in 2020. He had been employing remote production techniques for documentaries, corporate videos, and other projects for nearly a decade.

Michael is a DoP who enjoys blending the roles of artist and technician. Since going freelance in 1997, he has worked for all of the UK broadcasters and many in Europe and the US. Today, as well as factual films, current affairs and sport, his projects include corporate work, commercials and narrative. His videos have been broadcast around the world and his corporate output can be found on the websites of some of the world’s largest companies.

In building out and refining his workflow over the years, Michael had discovered the AJA U-TAP SDI USB 3.0 capture device, which is now part of his standard camera kit. A 3G-SDI or HDMI USB 3.0 device, U-TAP adds professional connections to laptops and workstations, making it possible to use them to capture high-quality video. Supported directly in macOS, Windows and Linux, U-TAP is bus-powered with the ability to ingest video across 3G-SDI or HDMI for use within many types of software without having to install drivers.

“Whether the production team is overseas and cannot travel or we simply need to reduce the number of people in a room, streaming the output of a camera is now standard practice, and U-TAP is an ideal tool for the job. It’s portable and plug-and-play and, most important, it doesn’t require a power supply because it is bus powered,” he said. “U-TAP is also very versatile. It supports nearly every format and frame rate you’ll encounter. The fact that it also works with multiple frame rates from 23.98 upwards to 60p means that I only need one box to serve very different clients.”

Michael’s workflow gives him flexibility to establish a stable connection so that interviews, for example, can take place regardless of how far apart the production team and interviewee are located. For one of his first post-lockdown projects, a feature documentary, the director, production crew and script writer were stationed in the US, but the interview subject was located in the UK. 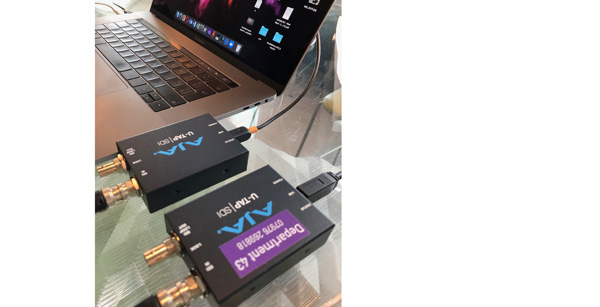 To set up a real-time connection between the group, the output from the camera was fed to the U-TAP, which appeared as a regular source in Zoom. Connected to the Zoom feed, the production team was able to watch, listen in and monitor the shoot in real-time. With the sound recordist’s audio mixer connected to the camera, the U-TAP could then extract the audio from the embedded SDI stream. Meanwhile, the team watching over Zoom didn’t experience any audio sync issues.

Michael also recently used the U-TAP to deliver an earnings report live stream from a European company to a global audience. Using two identical camera set-ups located in different offices within the same building, one for the CEO and the other for the CFO, plus two U-TAPs and a collection of other gear, the team was able to send high quality signals from the UK to the US over the internet. In the US, the UK feeds were integrated with three separate feeds from other members of the executive team using vMix Call, software used to add remote guests to live productions using a web browser and webcam.

Michael said, “Because U-TAP supports 1080p, we could send our signal over the internet at a high enough quality for a remote director to perform a very good chroma key and unify the output of the five remote sites. Although this can be done with other hardware, the U-TAP is so reliable that I’m confident that it won’t suddenly stop working in the middle of an important event.”

While remote workflows have been standard practice for Michael for some time now, he expects that the advantages made apparent to the larger industry throughout the pandemic will be hard to ignore moving forward, especially the cost-efficiency aspect of them. He also considers that the practice will open new doors for projects that may not have previously proven feasible due to budgets, logistics and travel. For these reasons, he expects that the media & entertainment and live event and proAV industries will continue to embrace a hybrid on-site/remote production approach moving forward, even as travel and lockdown restrictions ease.

Whatever the approach, Michael expects that AJA U-TAP will remain a key part of his workflow. He concluded, “U-TAP is what I use for remote production because I don’t need to think about it,” he said. “I just plug it in and it’s there, available as source in any app. It may sound boring, but what you need from any piece of kit in this industry is reliability, ease of use and support when something does go wrong. With U-TAP, you have all three.”  www.aja.com