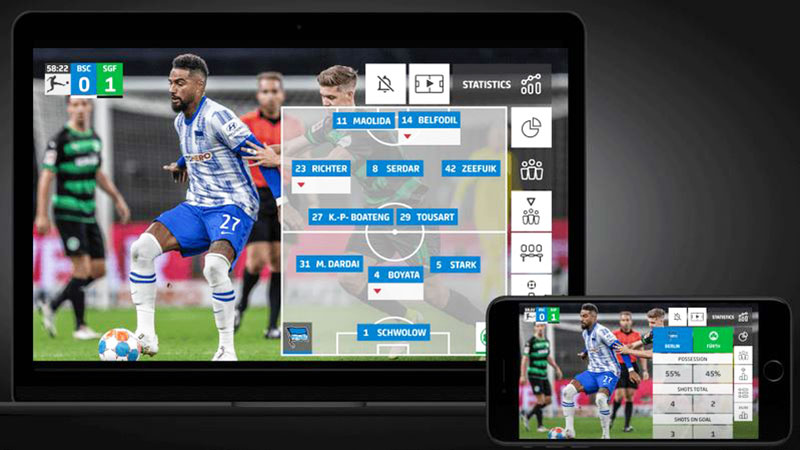 Delivering distinctive content that attracts and engages viewers is an on-going challenge for modern content providers, especially when capturing the fast-paced action of live sport. Recognising that personalisation is an essential element of audience engagement, at the start of the 2021/22 season, Deutsche Fußball Liga GmbH (DFL) launched several new media services pitched directly to fans. Among these is the league’s Interactive Feed, which is built on TeraVolt’s TVXRAY and uses various AWS Media and AI services.

It personalises the audience experience, automatically populating the viewer’s screen with custom video alerts, statistics and graphics that encourage interaction and rely on viewer responses.

TVXRAY collects and presents information in a non-linear way so that viewers can decide what is relevant at any time. ​It addresses different viewing habits as well, from watching matches in the traditional way to mobile, short-time viewing, removing the need for a second screen. It has​ an AI-based timeline with interactive features, and viewers can make their own choices regarding on-demand widgets, match and sports data and video formats.

From that foundation, DFL’s Interactive Feed is a series of six statistical widgets that feature information ranging from pictures and results to match facts and formations, for example, Average Positions and live rankings. Viewers can also access match highlights, a progress bar, and a multigame mode they can use to select games of interest and sign up for desired alerts. 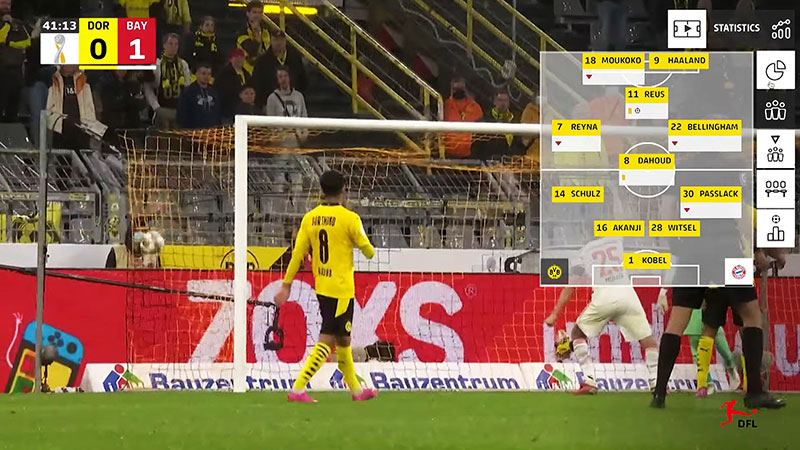 As each live game is covered, a database collects more than 40 match highlight clips, which are made available for viewers to watch on-demand via a ‘fixtures and results’ graphic within the Interactive Feed. Each highlight contains its own relevance factor to help the viewer find what they’re looking for, such as a goal that they may have missed. Viewers can opt to stay in a highlight browsing window or go back to the live version of the game. In other words, everything they see is under their control.

“We live in a digital age in which modern fans seek interactive, personalised content experiences that mirror what they get from mobile apps. Nevertheless, a mobile device isn’t optimal for watching live sport due to the small screen and encoded graphics,” said Dr Steffen Merkel, DFL Executive Vice President Audiovisual Rights. “Interactive Feed addresses small screen challenges by capturing all the data a viewer needs to follow a match, and arranging it in a way that’s easily digested alongside live video coverage in one interface.”

During a live Bundesliga match broadcast, the Interactive Feed’s underlying architecture automatically detects real-time highlights, like a goal or an assist. Using an algorithm that organises the data, the highlights become accessible to audiences as small icons in the timeline, shown at the bottom of the viewport. Audiences can drive their own viewing experiences by clicking on-air graphics to reveal statistical information about players and teams, ball possession and other tactical details, even from games outside of the current view.

Behind-the-scenes, these capabilities are enabled via an SDK as a transparent layer on top of the service provider’s online video platform (OVP), CDN, the video stream and the front-end player or app framework. Once the layer is integrated into a video player, the video and data are automatically synchronised to result in a coherent viewing experience – this work is done using computer vision in AWS.

The backend infrastructure powering the Interactive Feed was developed over a period of about two years, running on AWS services. The entire system is built as Kubernetes containerised applications in the cloud, using a cluster running on the AWS Elastic Kubernetes (EKS) container service with an AWS Relational Database (RDS) layer. DFL employs the RDS services to operate and scale the database in the cloud while maintaining high availability and throughput of data, and storage scalability. Amazon Simple Storage (Amazon S3) is used for publishing to the website and keeping state between users’ page requests as they progress logically through the site.

Data synchronisation, the clickable on-air graphics and the highlights are created using computer vision information. This infrastructure gathers insights into an event, the necessary time code in and out, and the relevancy of each scene, and then sorts them for different uses. A built-in database stores key data points and assets, so clients can pull up player pictures and other statistics.

Amazon ElastiCache accelerates performance to control latency, especially for compute intensive operations, and AWS Application Load Balancer automatically distributes incoming application traffic by intercepting, analysing, decoding and directing web traffic to the optimum resources, based on policies. One of the REST APIs is then cached by the Amazon CloudFront CDN, while the others are routed through directly.

Within the architecture, logging is done through the AWS Elasticsearch search and analytics engine, while a Prometheus open-source monitoring database, which collects and stores its metrics as timestamped data, within Interactive Feed’s EKS cluster is visualised over the Grafana open source analytics and interactive visualisation web application. When connected to data sources, Grafana displays charts, graphs and alerts, and its dashboards also examine the Amazon CloudWatch metrics. 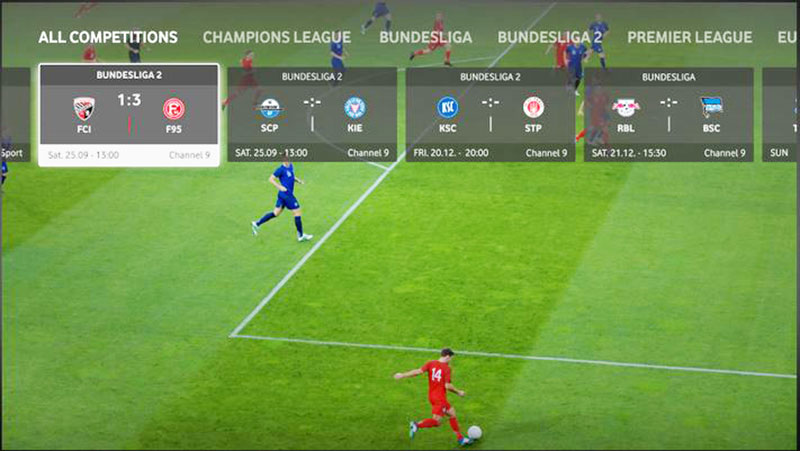 Bundesliga had initially started the Interactive Feed design and build with an empty canvas, aiming to make a unique product available to its media partners, meanwhile helping to meet the current demands of its customers. Ultimately though, it relied on TeraVolt and AWS to ensure optimal flexibility, scalability and the ability to distribute live content to a large-scale audience.

“We wanted to take a modern approach to this feature, totally focussed on fans, and that meant we’d need solid backend systems, as well as a third party to help with ongoing maintenance, which is why TVXRAY and AWS were good choices for us,” said Steffan.

The workflow supporting DFL’s Interactive Feed means the league can make a range of information accessible to viewers in a way that feels simple to them. Equally important, it accelerates the rate at which DFL can innovate. As the league continues to develop the service, the statistics supported will continue to grow, of course, and allow DFL rights holders to engage with audiences on a deeper level. aws.amazon.com