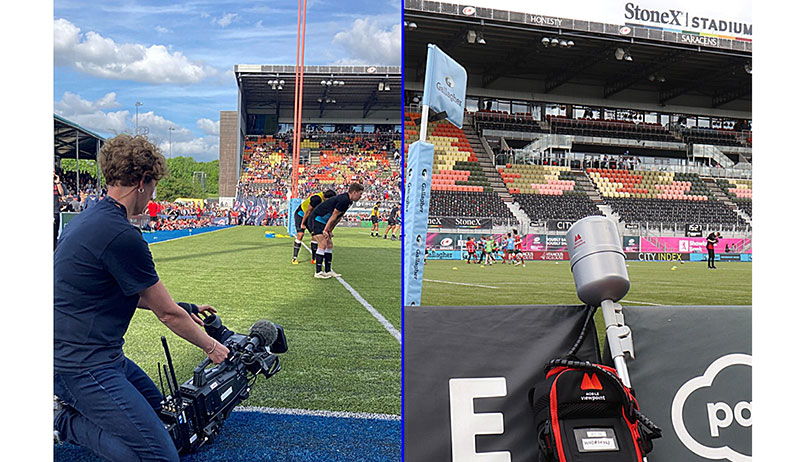 Vislink has delivered private network 5G systems at a sports event in the UK to show the potential of 5G in broadcast. Deployed by Vislink and its subsidiary Mobile Viewpoint, the system brings bi-directional IP connectivity right to the network edge and improves broadcast efficiency by supporting virtualised production in the cloud.

The event was a Gallagher Premiership Rugby match between Saracens and the Northampton Saints at StoneX Stadium in London, where Vislink and Mobile Viewpoint supported a project led by BT Sport to highlight the potential of 5G in broadcast contributions. It centred on the connection of the matchday cameras to a standalone private 5G network. These cameras’ output then formed part of the live BT Sport coverage of the match.

This is the first time that key matchday cameras, as part of a customer broadcast, have been enabled in this way in the UK. BT Media & Broadcast and BT Sport led the project with support from Broadcast RF, the University of Strathclyde and Neutral Wireless.

Following on from the world’s first stand-alone private 5G network for sports broadcasting at the British MotoGP 2021 Grand Prix, this recent public trial with BT Sport and BT Media and Broadcast demonstrates a new glass-to-glass, all-IP wireless and virtualised production. Vislink augmented their long experience in COFDM-based wireless systems by adding Mobile Viewpoint’s 5G expertise last year. The integration of these systems means that Vislink now has a suite of robust and efficient options for many different deployment scenarios. www.vislink.com