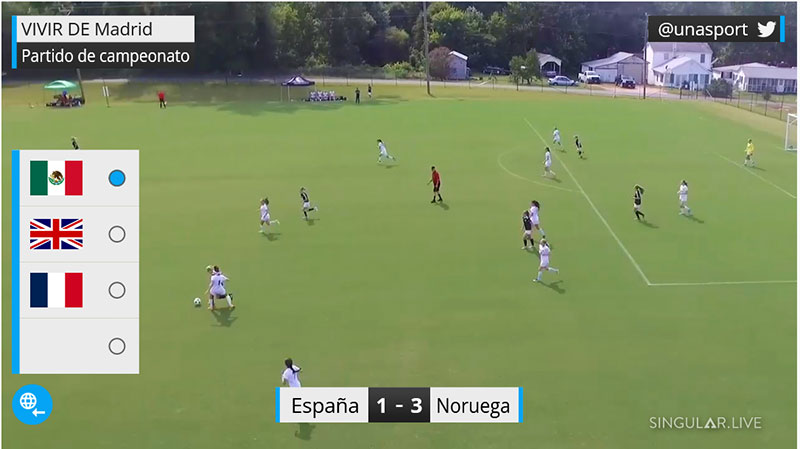 Through this upgrade, Grass Valley has aimed to enhance GV AMPP’s ability to localise content with much less effort. The deeper integration with Singular.live will enable AMPP’s tools to prepare graphics, either in advance or on the fly, from within AMPP’s GV Live Producer interface.

Live Producer has features traditionally associated with a production switcher, with multiple layers of graphics and text, chroma key, pre-recorded or live video sources and so on. An operator can now use it to customise transitions that incorporate selected graphics to create to create a specific, localised render.

Using Singular’s On Device or client-side mode, the graphics are rendered onto the playback device directly. This means that graphics can have a different look and feel, or contain different information depending on the audience.

Giving operators interactive and personalisation capabilities, the On Device outputs are delivered via Singular Embed Codes, which Singular customises for the operator’s websites. These Embed Codes combine the prepared overlays with the chosen video and player. By integrating with the media player, different graphics can be displayed by region, demographic or preference.

As a platform for virtualized media production tools, media producers use GV AMPP to create live content from anywhere and distribute it everywhere. By taking on this new functionality, GV AMPP simplifies the process of localising content for different regions, and different audiences.

“Adding Singular’s ability to render graphics right on the playback device opens up an unusual level of graphics personalisation that is not often seen,” said Grass Valley’s Director of Alliances, Vitus Greifenegger, “Consumers watching a sports event can now see deeper data or custom graphics for their team or favourite player based on choice or geography.”

“Integrating the Singular solution into AMPP has greatly simplified getting our graphics on air,” Singular.live’s CEO Andrew Heimbold said. “The AMPP platform fits perfectly with our overall goal of implementing cloud-native, browser-based SAAS methods for the media industry without relying on custom hardware.”   www.singular.live