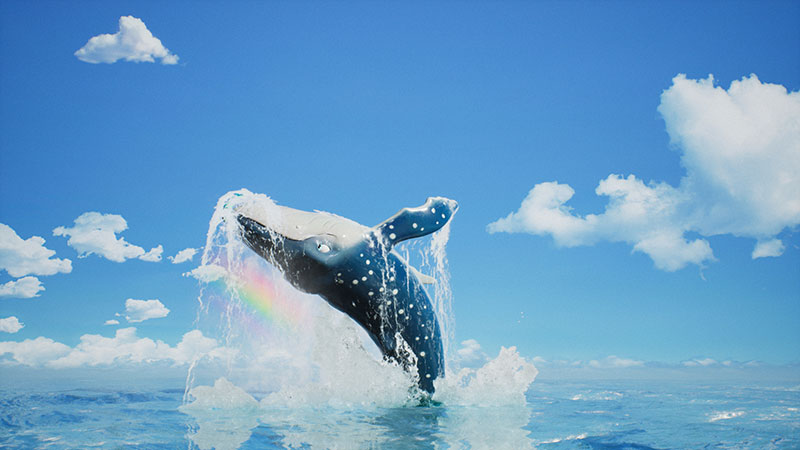 Telescope Animation has released a proof-of-concept trailer for its upcoming animated film, 'The Last Whale Singer', that demonstrates how animated content might be developed for multiple platforms in the future. Created entirely in Unreal Engine, the trailer shows the potential of using a massive, shared universe with an overarching story to serve as the basis for a video game, an episodic series, AR/VR experiences and other types of projects, each created using the same assets designed for the film.

'The Last Whale Singer' feature film tells the story of Vincent, a rebellious young humpback whale who must confront his destiny and save the oceans from destruction by an ancient evil force. Along with the film, Telescope will create and expand this same story to the other media from within Unreal Engine 5, working on a custom-built pipeline that can be used by the project’s artists, game developers, animators and storytellers.

“Our plans for 'The Last Whale Singer' required us to re-consider the techniques we use to create content, which meant we needed to develop a new pipeline from scratch, built in-house from the ground up,” said Reza Memari, Telescope’s co-founder and co-CEO, who served as the film’s writer and director. “While the clip has proved to us that our plan is working, it is the first of a series of reveals we think will appeal to fans, and that other studios will take an interest in.” 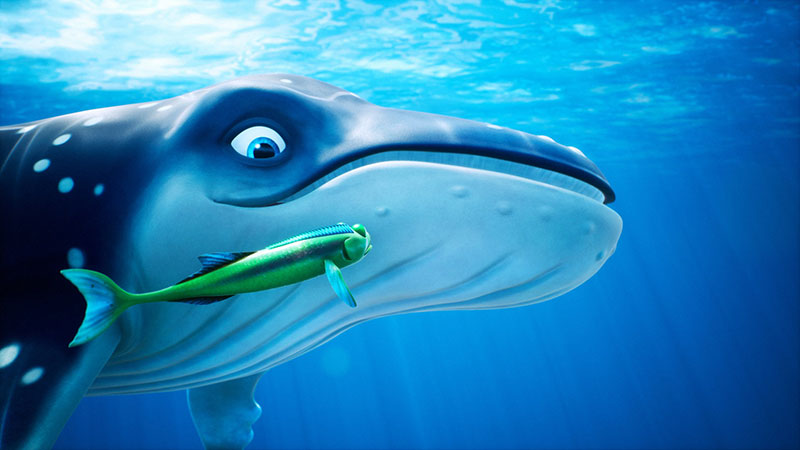 Founded in 2018, Reza and producer and co-CEO Maite Woköck envisioned Telescope Animation from the start as a transmedia studio based on Unreal Engine. Their goal was a custom-designed pipeline within Unreal that allows artists to simultaneously develop projects across multiple platforms, meanwhile using the same tools and assets.

Assets can be created in real time, all but eliminating rendering times, and then shared to other projects. “The biggest advantage of real-time is that artists and technicians can immediately see the effects of their actions instead of having to wait minutes, or sometimes hours for the final image to appear,” Maite said. “Naturally, all assets still need to be designed, modelled, textured, rigged and animated, but the real advantage of real-time is that it allows us to iterate more often, almost on the fly. This ability to constantly improve your output is rare in linear animation production, and even more restricted for European animation productions like ours that have much lower budgets than US studio productions.

“Sharing or reusing assets, effects, animations and other elements from one production to use in any other production and format -- a series, a game, or a VR/AR experience – will involve new UE5 features such as World Partition and Data Layers to allow multiple artists to work in parallel. For data exchange between UE and DCC packages, we are using the USD standard.” 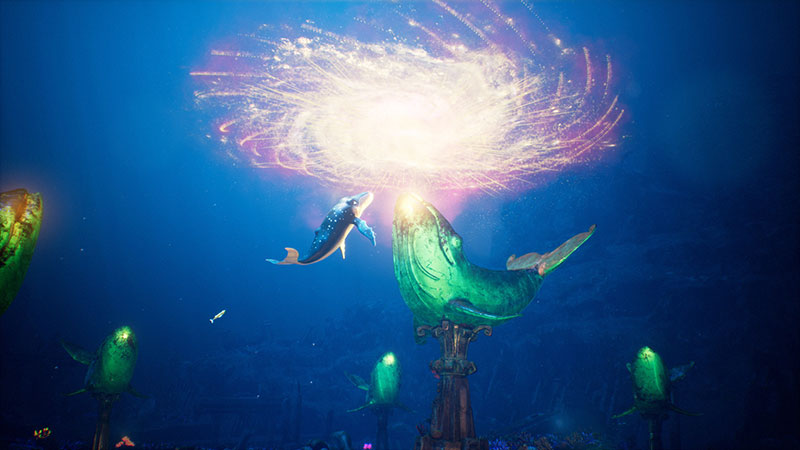 Artists can also storyboard in 2D and 3D, directly within Unreal Engine, using virtual reality camera rigs to create the shot layout directly within virtual sets. Reza recalled that for his previous film called ‘A Stork’s Journey’, his story team had created a set of beautiful storyboards depicting funny, emotional scenes with storks and sparrows. “However, when we moved from storyboard to 3D layout, we soon realised that many of the camera angles or scales were not achievable. Being artists, the team had instinctively drawn the shots to look good, without ensuring their accuracy in terms of 3D space and other real world factors.

“We were unable to recreate certain aspects of what the storyboard artists had been working on over time with so much passion. It was a huge let-down and, in the end, a waste of resources because we had to re-imagine a lot of the storyboarding in layout.

“For ‘The Last Whale Singer’, we face a new challenge. We’re dealing with whales and fish inside gargantuan sets. The size relationships are off the charts. No storyboard artist would be able to stick to the correct measurements and envision camera angles that are true to the actual reality of these gigantic creatures and sets. But, by storyboarding in a 3D space, our story artists can set cameras, even choose lenses, and pull the actual 3D character models into the frame and really see how big they are in relation to one another. 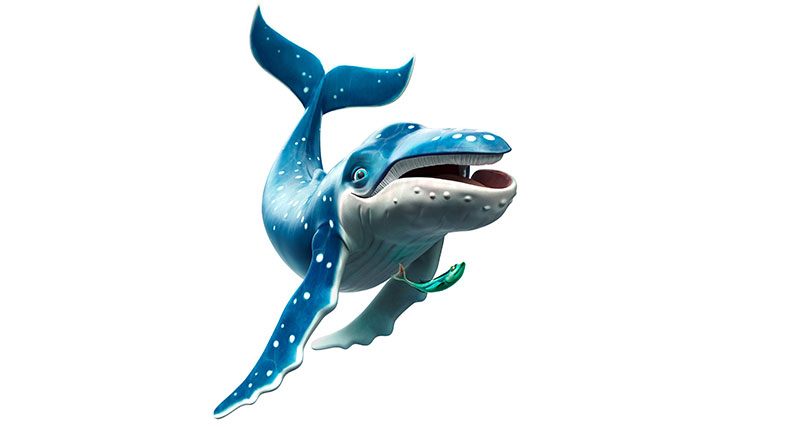 “Furthermore, we’re already creating a first rough layout right at the storyboard stage, which is a huge time saver and, again, allows us to iterate more times than usual. Sadly, the critical layout stage is so often rushed because production wants the animation to start as quickly as possible. So by letting the story artists spend more time thinking about actual 3D shots in 3D space with 3D cameras, I think that the end result will be much more compelling and a more harmonious experience.”

Although production has not yet started, Reza and Maite described, as far as possible, some production-side developments they are working on regarding asset creation and FX. For instance, the artists will be able to procedurally generate location and character assets, which will save time and resources. Telescope also has a water simulation in development, which will feature throughout the Whale Singer Universe.

“Right now, we’re planning on doing all the pre-production outside of Unreal,” Reza said. “This means designing all sets, characters and props, creating the assets, even creating a beatboard of the film, in 3rd party software. But, starting with the storyboarding process, we intend to switch over to Unreal over time. We envision a 3D/2D animatic using rough 3D sets and 3D cameras and combining them with 2D illustrations that convey the emotions. Then we’ll pretty much stay in Unreal for shading and lighting.

“The way it looks now, we will leave Unreal for some animation work in Maya. We are still testing our pipeline and defining our exact workflow. In particular, we’re testing whether we will output the final image in Unreal, or do some additional compositing work outside of UE.”

Ultimately, the aim is to develop a procedural system for vast natural sets, such as coral reefs and underwater chasms, and also use procedural generation for fish swarms, materials and set dressing. Maite noted, “Procedural generation is a wide subject, but it all begins with artistic intent, so the very first thing you need is a vision. With clear design goals and limitations in mind, the algorithms basically do the rest. For some specific water simulations and VFX, we’re also considering a mix of Unreal’s own Niagara capabilities and Houdini, depending on the shot and requirement.

While no production, especially those of the scale and level of innovation of ‘The Last Whale Singer’, gets off the ground without it, funding has been an essential element of this project. To help accelerate development and the release of the trailer, Telescope received the first of two Epic MegaGrants along with extensive technical expertise from Epic Games. Then later on, the second MegaGrant helped finalise work on the team’s bespoke pipeline for Unreal Engine 5. 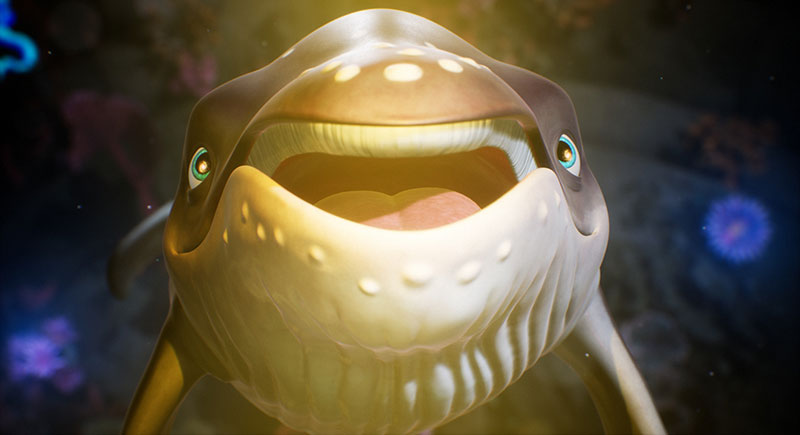 Telescope Animation received a further grant from Creative Europe MEDIA, the European Union’s program supporting the cultural and creative sectors, to support the studio’s work on ‘Innovative Business Models and Tools’. This funding helped Telescope establish its first facilities and continue the pipeline development. Since its founding, the company has opened a studio focused on games, AR and VR in the Berlin-Brandenburg region, an animation studio in Hamburg and been able to hire full-time and contract artists and production teams.

Production on ‘The Last Whale Singer’ feature film is set to begin later this year, with a theatrical release targeted for 2025. The prequel game, titled ‘The Last Whale Singer: Rise of the Leviathan’, is also currently in development for PC, Nintendo Switch, as well as PlayStation and Xbox consoles. The game’s launch will be timed to coincide with the release of the film. Additional projects connected to the shared Whale Singer universe – as well as two other original IPs in development – will be announced in the future.

'The Last Whale Singer' made its official, public debut on 13 June 2022 at the Annecy International Animation Film Festival, where the concept trailer was on display in the Epic Games booth. www.telescopeanimation.com