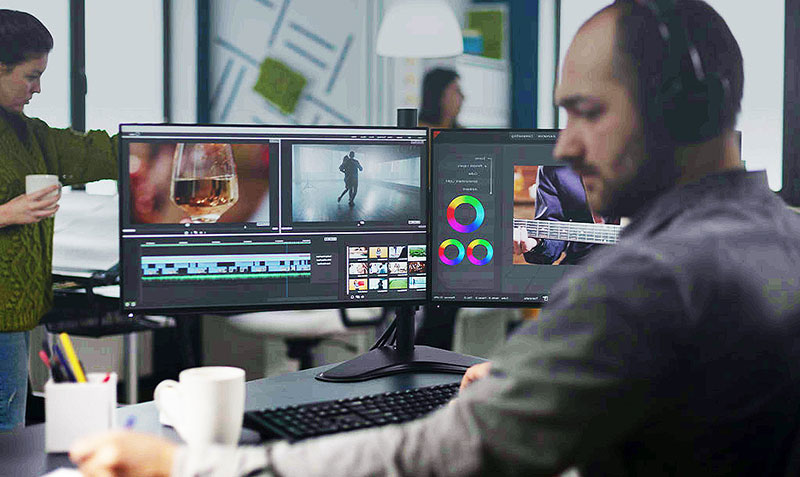 Because all devices and applications can share the same network, signals can be streamed between all points regardless of location. This makes Dante systems straightforward to expand and scale when requirements change. As soon as Dante-enabled components are connected to the network, operators can start using them – more than 3,200 compatible audio products are now manufactured and in use around the world. Dante can also be used with existing networks, and to help simplify the installation and set-up of audio/video systems.

This low latency performance makes Dante AV an advantage for real-time events and production where clean effects, transitions, video walls and multi-image projections are critical. Because video and audio are handled as separate elements, if necessary, they can be independently routed. A divided implementation makes the hardware design simpler – breakout boxes, adapters and cables for different products aren’t needed – and reduces the processing overhead required for video-only or audio-only products

Brad Price, Senior Product Marketing Manager at Audinate, talked about challenges Dante AV was developed to overcome, and the opportunities it opens for enterprises and broadcasters. “Dante AV addresses the acute need for a coherent control plane for AV networks that works across multiple vendors,” he said. “It has a common set of tools that handle system configuration, security and monitoring, independently encompassing both audio and video, and serves as a mature ecosystem designed for interoperability and ease of use for manufacturers and end users.

Rather than a network protocol for AV networks, which sets out rules for particular types of data exchange between devices, Brad described Dante as a ‘stack’ of network technologies that are themselves common protocols, such as PTP clocking, UDP and TCP traffic, mDNS and others. “These are used together to facilitate timing, data delivery, device discovery and all the various features of Dante-enabled products,” he said.

“Dante devices are automatically discovered by Dante Controller software running on a computer on the same network. Multicast DNS, which locates devices by name on small local networks, is employed for this purpose, which means that pre-configured name servers are not required.”

The Dante AV software’s ability to keep timing and latency aligned is one of its most important features. Dante uses a PTP (IEEE1588) clocking system that allows all networked devices to synchronize to within 1 microsecond. Brad said, “Using this timing information, devices automatically adjust themselves to play out content at the same instant. Latency is thus fixed at a value that allows for sufficient buffering. On a 1Gbps audio network, for example, that value is typically 1 millisecond. Video networks typically operate at somewhat higher values.”

Dante AV modules, which are full-featured networking modules for sending or receiving devices, are supplied within Audinate’s Dante AV product design suite. The suite includes the Dante AV module with complete documentation and software, including SDKs for both components, plus a JPEG 2000 codec, which preserves up to UHD60 resolution with 444 colour and visually lossless image quality across multiple generations. www.audinate.com