The last time Brazil’s terrestrial broadcast system received a major update was TV 2.0 released in 2007, introducing HD video and updates required to deliver video to mobile devices. Although TV video innovations continued rapidly through the intervening 15 years, the release of a complete, new TV 3.0 specification from Brazil’s SBTVD Forum is still to come, due for deployment in 2025.

Therefore, TV 2.5 was released in 2021 as a transition step. It gives existing TVs access to video and audio quality improvements via a software update, including higher framerate and HDR image quality, and immersive MPEG-H Audio.

Like many major sporting events, the 2022 FIFA World Cup creates an opportunity to test and demonstrate the capabilities that are developing to support the upcoming TV 3.0 standard. In this case, it is the first time these technologies have been deployed in a complete end-to-end production to deliver 4K HDR video with immersive and personalised audio. Going forward, the trialling system will facilitate the distribution of current and future formats, including 8K resolution, HDR and Next-Generation Audio (NGA) to over-the-air broadcast (OTA) and over-the-top (OTT) streaming platforms.

A parallel TV 3.0 trial underway as part Globo’s demonstration is the first end-to-end trial over DASH streaming of VVC video. Many of the same participants are contributing expertise, focussing on VVC/H.266 as potentially the next major codec. Like TV 3.0, VVC is taking new developments into consideration that will both enhance visual quality and improve performance.

The two trials are the outcome of a long project involving the collaboration of several companies. It illustrates the fast pace at which industry-wide support for the various systems is maturing. The MainConcept AVC SDK was chosen as the underlying video codec for the trials. The MainConcept Live Encoder commercial application is used in live workflows to ingest, prepare and stream audio-visual content that is compatible with any type of consumer device. Live Encoder captures the SDI input signal, compressing the video using the MainConcept AVC/H.264 Codec and audio into the proper formats (LC AAC and MPEG-H).

It also keeps metadata messages for backward compatibility with existing devices, and uses the MainConcept MPEG Transport Stream muxer for packetizing all bitstreams for OTA (over the air) broadcast transmission. This means Brazilian TV viewers with the TV 2.5 software upgrade receive higher quality video and audio without upgrading their hardware.

Another participating company is V-Nova, principal developer of the LCEVC (MPEG-5 part 2) standard that adds an enhancement layer during conversion. When combined with a base video encoded with a separate codec, this layer is capable of producing an enhanced video stream. The experience gained from this broadcast will contribute to discussions on the inclusion of LCEVC in the TV 2.5 specification.

At the trial, the LCEVC software is integrated into the MainConcept encoder, where the progressive 10-bit input signal is converted into interlaced 8-bit 1080i video for backward compatibility on existing consumer devices. It encodes this lower resolution version of a source image using an existing codec (the base codec) and encodes the difference between the reconstructed lower resolution image and the source using a different compression method (the enhancement).

Those remaining details that make up the difference with the source – that is, residual information necessary for accurate recreation – are compressed with LCEVC using proprietary tools on at least two enhancement layers. One is at the resolution of the base to correct artefacts caused by the base encoding process, and one is at the source resolution that adds details to reconstruct the output frames.

LCEVC adds the enhancement layer to play back at full 10-bit progressive 1080p, into the base codec bitstream as a separate SEI (supplemental enhancement information) message – which is data inserted into the bitstream and received synchronised with the related A/V content. Devices updated to support LCEVC can use the SEI message to play back at progressive 10-bit 1080p.

Addition of the MPEG-H audio standard from Fraunhofer IIS fits into the workflow ahead of the encoding. Fraunhofer IIS installed their MPEG-H AMAU (Audio Monitoring and Authoring Unit) hardware that creates a control track instructing the MPEG-H encoder, running inside MainConcept Live Encoder, how to virtually organize the audio objects within the room, laying out the immersive audio experience.

MPEG-H Audio enabled devices, like soundbars or set top boxes, play back the immersive sound; devices that do not support MPEG-H Audio play back the AAC stereo track. By delivering audio spatially, MPEG-H provides more realism from all around the listener. 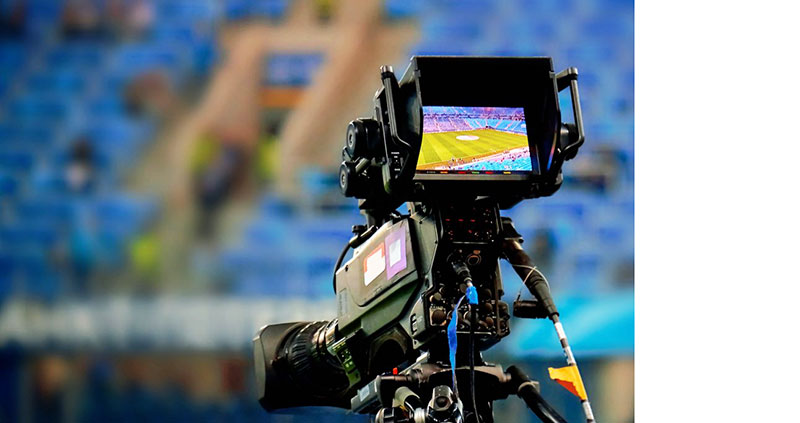 Advanced HDR by Technicolor, sourced through commercial distributor InterDigital, is video processing designed to enhance the image quality of any of the HDR formats. For TV 2.5, Advanced HDR by Technicolor converts HDR input signals into backward-compatible SDR video with its own metadata. That metadata is used on updated devices to upscale to Technicolor HDR on supported TVs and is carried through all encoding and transmission steps to the consumer device. The metadata does not disrupt the operation of non-updated consumer devices, which continue working with SDR.

Carlos Cosme, Innovation Specialist at Globo, said, “It is amazing how fast a supporting ecosystem is being formed, with various implementations based on software and hardware. Globo, at the technological forefront, is experimenting with the joint operation of the MPEG-5 LCEVC codec with the H.264 codec, for the first time in Brazil, and all of this is associated with an immersive and personalized acoustic experience.”