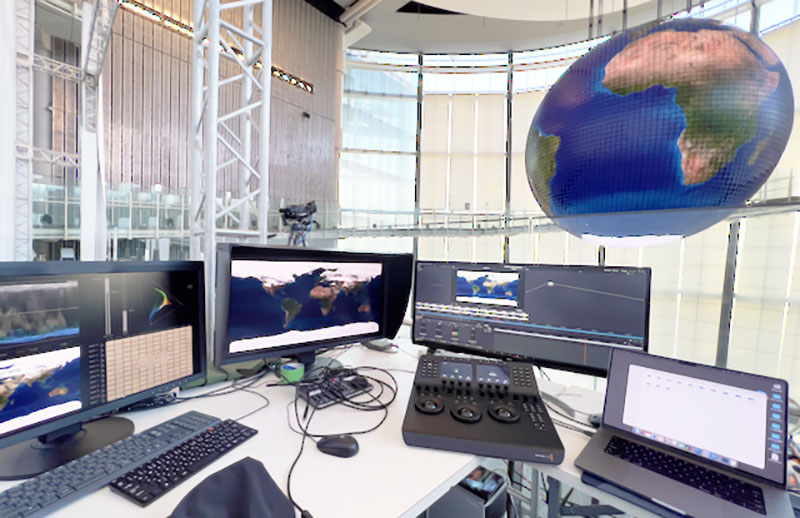 The Japanese National Museum of Emerging Science and Innovation (Miraikan) in Tokyo first launched its spherical earth installation Geo-Cosmos in 2001, and has renovated it three times since then. The museum works on the idea that, to maintain their vitality, museums need to be in a constant state of change. Attracting new visitors and encouraging them to return requires compelling new exhibits and regular updates to existing installations.

The current iteration of Geo-Cosmos is the result of a joint venture between Miraikan, Dentsu, Mitsubishi Electric, GK Tech, and Go and Partners, and has involved the collaboration of more than 70 experts. The visitor experience features HDR, wide colour gamut, high frame rate imagery displayed on 10,362 new LED display device panels built with screens of 1,500 nit brightness. These panels are fitted to a very large globe representing Earth, suspended inside the museum. The complete system runs on Miraikan’s new audio, video, graphics and control system.

The vibrance of the new Geo-Cosmos exhibit’s imagery and video instantly captures the attention of patrons. The visualisations portray the planet with more realism than its earlier versions, aiming to inform people about modern environmental challenges such as climate change concerns and demonstrate their impacts. For instance, a new part of the exhibit shows vivid cloud images powered by weather satellite photo data that visualise Earth’s constantly changing appearance. A series of base map background imagery illustrates seasonal colour changes, including polar ice and vegetation fluctuations. 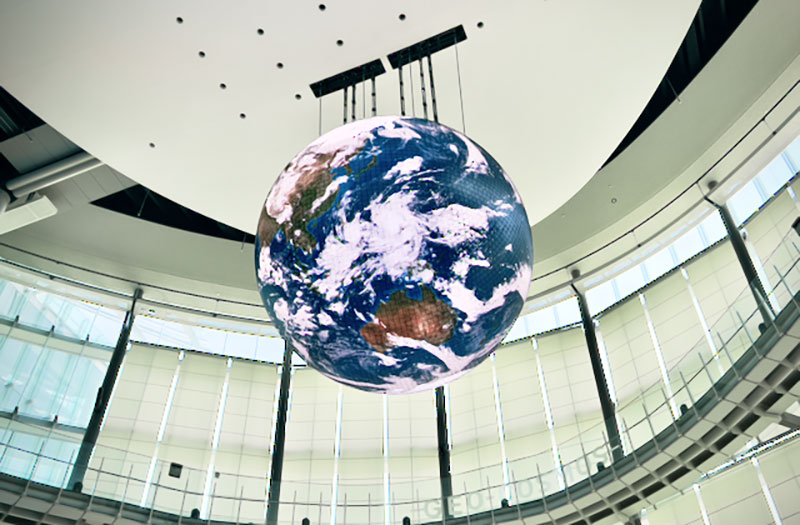 Because visually communicating this kind of information depends on dense, precise colour gradation, extended luminance and smooth video, the Miraikan team chose the equipment used in the installation with care, aware that the renovation would require a deep understanding of up to date video specifications for content production and systems integration.

“In talking with the Miraikan team, it was clear that conventional SDR systems would be inadequate for a project like this. Accurately depicting the clouds that hover above Earth, the ice fields that blanket the Arctic and Antarctic, and fluctuating cloud luminance would require a high dynamic range set-up,” said Tsuyoshi Go Hotta, Executive Producer and Chief Technical Producer at Go and Partners.

“Nevertheless, working with HDR can be challenging because content often doesn’t look as expected due to differences between the creator’s intent and the production environment. The processing behind it is complex, and very few products perform as we expected.” 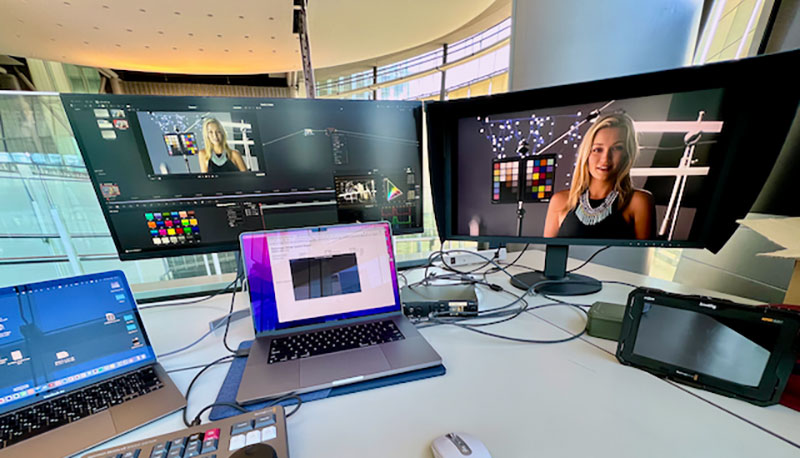 They approached various manufacturers for assistance and found success with AJA. The AJA FS-HDR converter, in particular proved essential, allowing artists to make subtle corrections to the content in the projection environment. The creative team used its fine correction tools and preset functions to switch out images for content and adjust imagery as needed depending on variations in the brightness of ambient light in the museum environment.

Go Hotta said, “FS-HDR and other AJA equipment suited our project specifications and also had the stability and reliability we required for the job. Plus, the developer SDK has been great for helping us save time.”

The new Geo-Cosmos supports 8K playback of video files output from an 8K recorder/player, custom-developed with ASTRODESIGN, experts in specialised 8K video applications. Content is produced for this player as OpenEXR still image files in 6,204 x 3,102 resolution, HDR (HLG or PQ), Rec 2020, 59.94 Hz. Working through a HP workstation, the system converts the still images into a Geo-Cosmos panel layout at 8K resolution and transcodes them into HEVC (H.265) .mp4 8K video. Audio is then added to this HEVC video with video processing software, and then transferred to the 8K recorder/player. 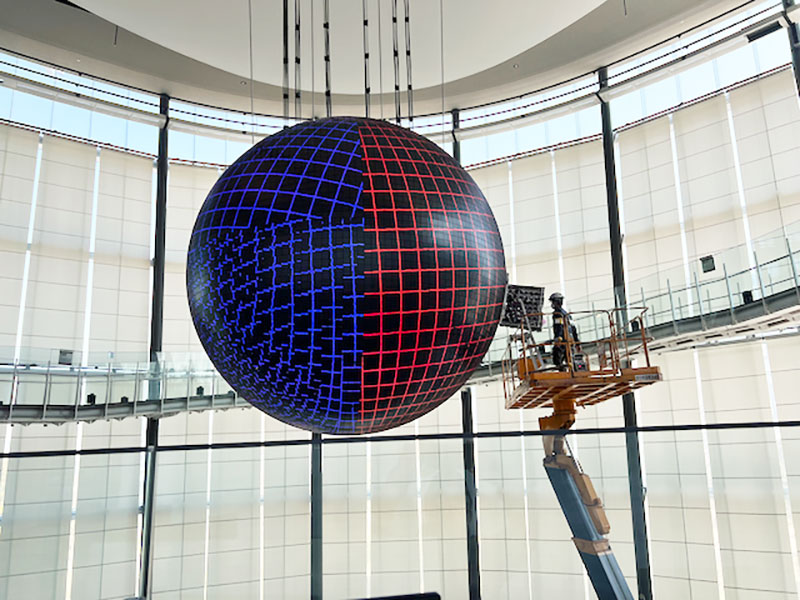 Monitoring and testing the sphere's displays for quality control. 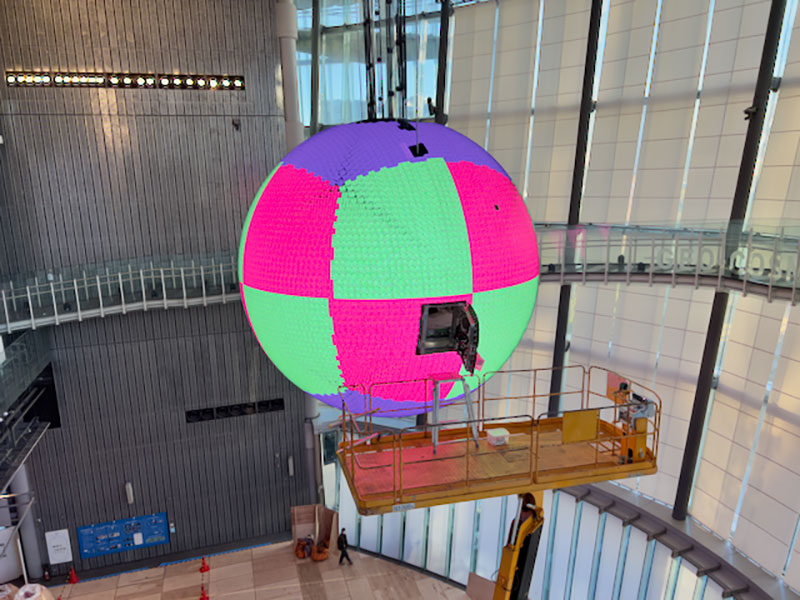 The SDI embedded audio signal is output from a separate KUMO channel and sent to a de-multiplexer. 4K UHD monitors connected to the KUMO are used for video quality control. Eight 3G-SDI signal outputs from the FS-HDRs are converted for fibre delivery to the sphere via optical fibre, and finally displayed on the LED panels.

Alternatively, Geo-Cosmos supports real-time video playback from external connections, such as a high spec laptop PC. For this use case, a HDMI signal is output from an external PC in 4K UHD (59.94 Hz or 29.97 Hz) with 10-bit, 4:2:2, Rec 2020 HDR (display peak brightness 1500 nits) specifications, using an equidistant cylindrical projection to map the data to the sphere. 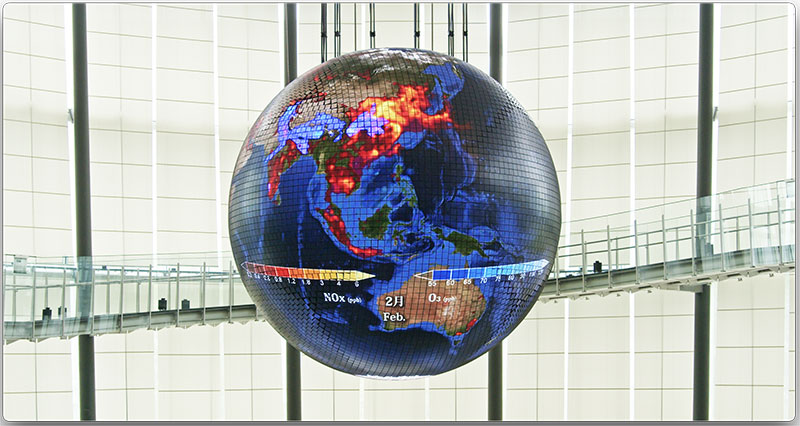 HDMI signals from the PC are input through an AJA KONA HDMI capture card on an HP workstation where the images are converted into the Geo-Cosmos panel layout for placement, and output via an AJA KONA 5 I/O card on two 4K SDI (2SI) channels, which are then input to the KUMO.

Go Hotta remarked that installations with hardware set-ups and workflows similar to those in use at Geo-Cosmos will soon be commonplace in museums worldwide. “However, while working with these tools may take the museum-goer experience to new heights, it demands extra agility and flexibility from our team, which AJA systems have helped us achieve,” he said. www.aja.com