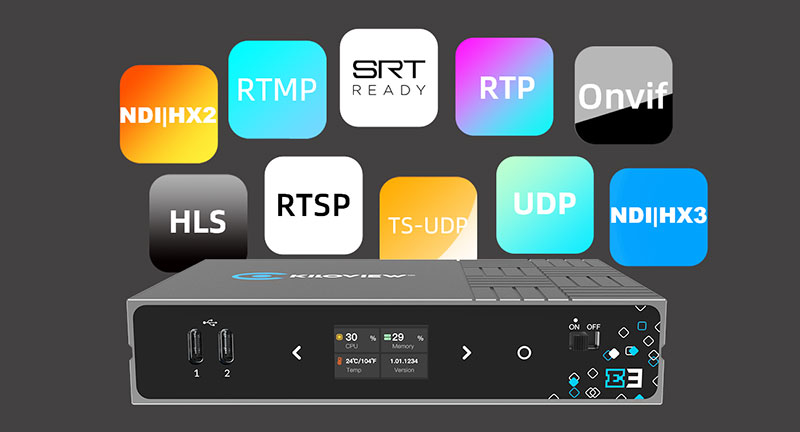 KILOVIEW’s new E3 encoder has inputs for HDMI signals of up to 4K p30, and for 3G-SDI signals of up to 1080 p60. Either input can be encoded to H.265 and H.264 simultaneously, or in combinations of video outputs from both video sources. E3 also encodes video sources from either port, and will then mix both into one output in picture-in-picture or picture-by-picture mode.

Supporting simultaneous streaming and recording for post and further application, all E3 inputs can be recorded in .MOV/.MP4 through three USB ports or NAS storage. Either input has a loop-through option as well that outputs the stream (4K through HDMI and 1080p through SDI) for delivery to the destination unchanged.

With an up-to-date chipset, the encoder supports streaming to 16 destinations at once by outputting in both mainstream or primary video formats for recording, with up to 8 channels in 1080p, and sub-stream, with up to 8 channels in 720p. Bitrate is adjustable with a maximum bitrate of up to 100Mbps. Through its support for HEVC, E3 can maintain video image quality at lower bitrates, saving roughly 50 percent of your bandwidth.

E3 rotates and crops video, and adds custom overlays to the output video in preparation for webcasting.