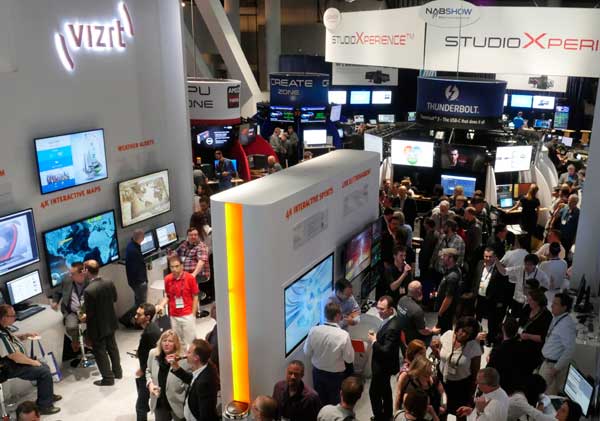 NAB is the largest industry event in the world and a key indicator for trends in digital media. Over 100,000 broadcast professionals made their way to Las Vegas to see the latest products and divine the future course in baseband and IP broadcast, OTT distribution and all forms of digital media production.

Digital Media World was at the show and here are some of the exciting stand out announcements.

The Alliance for IP Media Solutions (AIMS) has made its industry show debut in Vegas. The Alliance was formed to agree on and promote standards for IP infrastructure, regarded as a critical move for the successful and sustainable uptake of IP systems in broadcast facilities. Formed only five months ago, AIMS now includes more than 30 manufacturers, service providers, media content producers and distributors

Every year major themes come together at the show. In previous years, themes have centred on the digital camera revolution with the launch of the RED ONE, HD, and in following years 3D stereo production and UHD/4K. This year dominant themes are HDR, virtual reality, hardware virtualization, software defined data centres for broadcast and the move from SDI to IP video transport and delivery.

Consumer HDR TVs are already on the market as the major manufacturers continue to roll out new models, while 3D and 4K sets have yet to reach the anticipated uptake. But the obvious, visible difference between viewing a HDR image side by side with SDR 4K image will, I think, make it an easy decision for consumers to opt for HDR.

The promise of VR has been around for decades. But only now are the necessary elements for video capture becoming available to producers, coupled with the the necessary processing power and accessible fast image processing and playout coming together. Some of the content on display at the VR Pavilion was terrific. It is genuinely immersive with beautiful image quality. The usability and quality will only improve month by month. Will VR replace existing content models? No, it is different and complimentary. But without a doubt, from now on we will see more and more VR and 360° content in numerous applications including - but certainly not limited to - media and entertainment.

An IPTV future may still be a while in coming, and may arrive in forms that are still in development, but the change to IP from SDI is inevitable. Factors that convince me that this is so are the potential benefits in terms of agility that cloud transport, software-defined delivery and broadcast virtualisation offer content owners and operators. Many native and hybrid IP products and solutions including end to end delivery are becoming available.

Nevertheless, due to the sheer volume of SDI based environments and investment cycles, SDI will be around for a very long time, Or maybe it won't take that long at all. I am sure you remember how quickly the old world of film acquisition came to an abrupt end, not with the launch of RED but more due to the Canon 5D and Alexa.

Our digital media future continues to unfold at as fast a pace as it has for over 20 years. Subscribe to the weekly Digital Media World newsletter or  check this website for more NAB news on these themes.