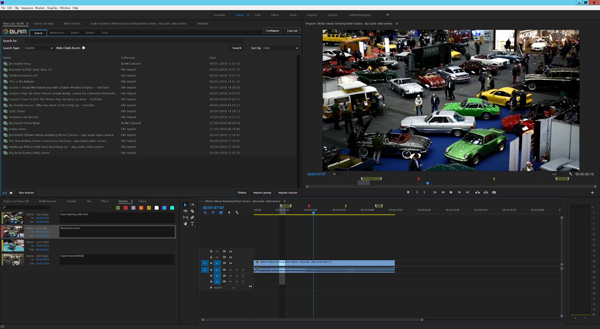 The Blue Lucy Asset Manager, or BLAM, is asset and workflow management software. The BLAM plug-in for Adobe Premiere gives users access to the application's core management functions from inside Premiere Pro. With the plug-in, users may import media, search for existing media, and manage their bins, workspaces and Premiere projects. They can also render and export files, and trigger downstream workflows such as approval and delivery.

Two new tools, Task Management and Metadata Markers, are built into in this BLAM plug-in update to give production managers better visibility needed to run facilities efficiently, so that editors can spend more time on creative work.

Editors can use Task Management to manage their workload and priorities from a single interface. Because editing tasks are included in the BLAM workflow, editors are notified as soon as upstream tasks, such as logging or shot listing, are complete and the material is ready in Adobe. The editors can then trigger review and approval, compliance and other downstream tasks when their own tasks are completed.

The Metadata Markers capability in the plug-in allows any comment markers that an editor sets on the Premiere Pro time-line to persist with the source clip or project sequence in the BLAM. The implementation is bi-directional so that shot logging commentary made in the logging view of BLAM will also appear in Premiere. This capability allows editorial to focus more on the creative side of a project because shot logging can take place any time ahead of editing through the BLAM’s web-based interface.

The updated Adobe panel will be demonstrated at BroadcastAsia 2018 from 26-28 June by Blue Lucy’s integration partner, Ideal Systems. Visitors will also have access to a preview of the new BLAM UI and API, shown at NAB and scheduled for release in September 2018. Blue Lucy is rebuilding the BLAM API to make it simpler to code against and conforms to the OpenAPI specification with a machine-readable interface to its API based on the REST architecture standard that facilitates documentation, code generation and testing.  bluelucy.com