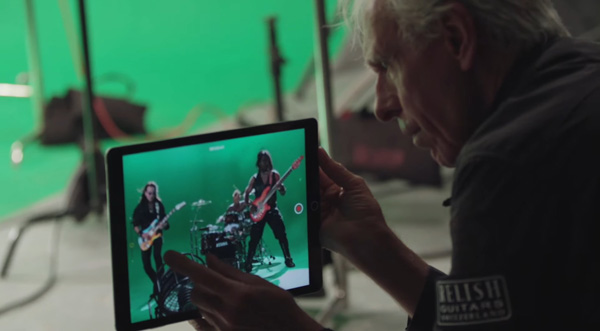 Through his long career, rock and roll guitarist Steve Vai has worked with musicians such as Frank Zappa, David Lee Roth, Whitesnake and Ozzy Osbourne, and won three Grammy Awards. In spite of his traditional heavy rock sound, Steve was interested in taking advantage of modern production techniques for his most recent music video ‘Dark Matter’ to both give it an other worldly look, and simplify his own part in the project.

Steve chose to work with Moai Films to produce the video. Director Lukas Colombo decided the video would be shot entirely on green screen, an approach he does not often take. “My natural tendency is to capture all the action and visuals in camera as far as possible,” he said. “But because of time constraints with Steve, and also the diverse alien landscape concepts for the video, it made more sense to shoot this way.”

Moai Films recorded the footage with two URSA Mini Pro digital film cameras, and assembled a video village with SmartView 4K monitors and several Video Assist 4Ks. “We placed one of the cameras on a 20 foot jib for most of the shoot,” said Lukas. “We moved our B camera around on a tripod, as required for each sequence.” 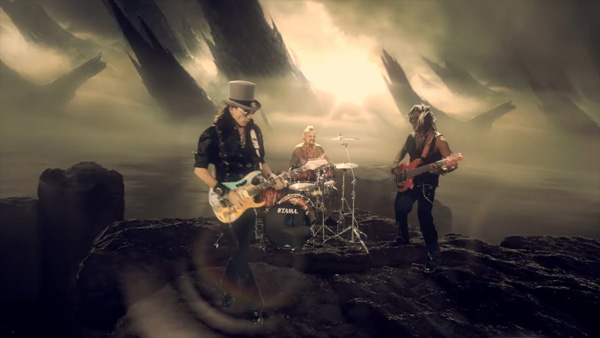 Steve wanted to capture each band member separately and in a way that highlights their own special style, but have them all appear to be playing together in the final video. “The idea that I came up with was to shoot the base player, Phillip Bynoe, playing to the track as it plays back twice as fast. So when you bring that speed down to normal, and watch it, he’s playing in sync with the track, but his motions are slow motion, so to speak,” he said.

“For the drummer we did the opposite. The idea was to shoot him playing to a very slow playback, because drummers are very dynamic, especially Jeremy Colson. When you bring that up to speed, again, it looks like he’s in sync with the track but the actions just look like there’s something interesting and bizarre about them, that just doesn’t look normal.”

For himself, he chose the most complex variation and decided to play his track backwards, and then playback the footage in reverse. “I had to actually learn the song backwards on the guitar,” said Steve. “This is a daunting task because it’s never the way you think it is. You have to completely mirror your perspective because everything is backwards. All of those  complexities were a fun challenge, but it felt like wearing a straight jacket and trying to run a forward marathon with eyes only in the back of your head.” 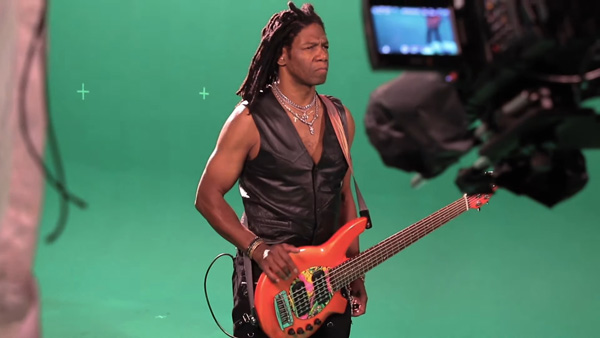 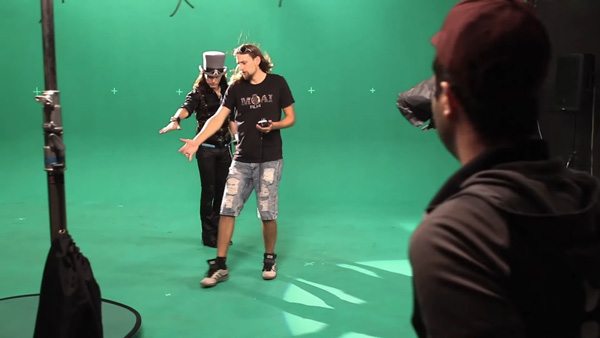 The production unit used the URSA Mini Pros to shoot at several different frame rates to capture the band members’ unnatural moves. Steve focused not only on reversing his own guitar playing, but also on applying the same thinking to his hand and body motions. He and Lukas watched frequent takes back on set to make sure they were getting what they needed, but in the end, they were both pleased.

In post production, all of this disparate footage was ingested into DaVinci Resolve 15 where the editors had to deal with regulating the frame rates with the sound track. Moai Films then brought in VFX Supervisors Bruce Jurgens from Legion Entertainment and Nick Torres to guide the design. The concept of the video was to place the band members in a variety of alien worlds using a combination of matte paintings built on multiple planes and effects within the Fusion page of Resolve.

Nick likes Fusion’s node based layout. “The node workflow gave us the maximum flexibility to manipulate footage. Unlike a straight layer based approach, nodes are non destructive allowing many more possibilities and a more efficient workflow,” he said. 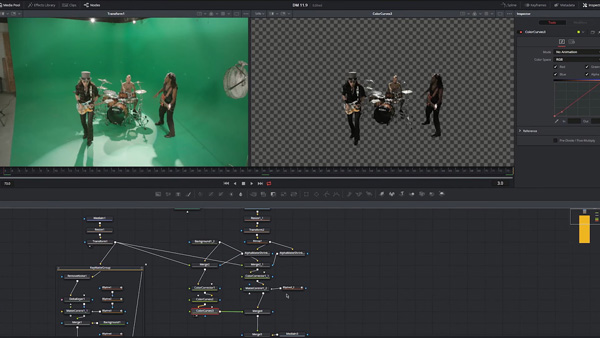 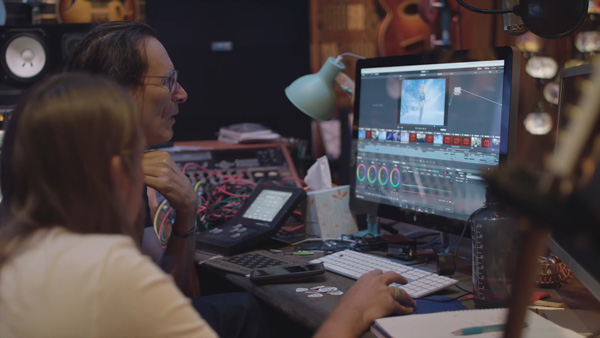 Bruce was responsible for the matte painting work and compositing the video’s Ice World environment. Together with matte painter Juliana Arrietty, they were able to incorporate their work directly into Fusion composites. “Maintaining a consistent look was critical,” said Bruce. “Because all of the post production software can be accessed on pages of the same Resolve 15 application, we were able to preview colour grades directly, just ahead of the composite, resulting in the continuity we needed.”

The VFX team combined 2D and 3D elements to create the fantasy environments. “We wanted the look to be completely alien,” said Nick, “with tall spires as mountains and a glassy still ocean with a fast rolling fog on top.” Juliana’s 2D elements were brought into Fusion for manipulation and integrated into the environment with the software’s deep compositing tools. These use RGB colour and XYZ position information in each pixel to blend 2D images with 3D elements invisibly.

From there, the VFX shots could be seen directly within the edit, due to Resolve’s integrated design. Lukas’ team had been accustomed to working with another editing package, but made the switch to Resolve for this project fairly easily. “The workflow makes my job easier,” he said. “I don’t have to manage files across so many applications and worry about transcoding or consolidation. It just works the way you would expect. It gives a new meaning to the idea of dynamic linking between applications. With Fusion incorporated into Resolve, we could work almost exclusively inside Resolve 15.” 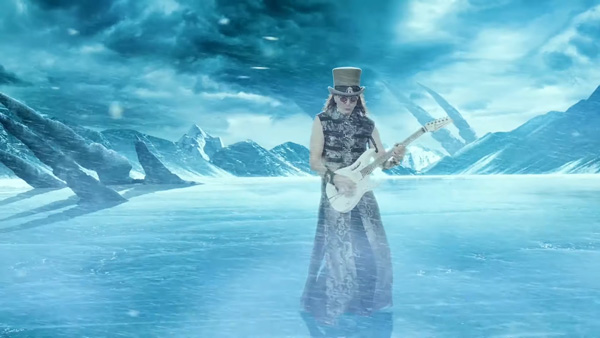 Nick described using the keying and matte tools in Resolve. “Each musician’s footage required extensive cleanup that needed separate approaches. We created mattes with multiple UltraKeys masked together, each one tuned for the specific challenges we wanted it to address. Fusion's Ultra Keyer is a chroma key tool developed specially to extract mattes from images with greenscreen backgrounds. The hair elements, for example, for Steve and bassist Philip Bynoe, have quite different characteristics and needed their own instances of fine tuning to keep all the detail.

“We needed to do a lot of rotoscoping for Jeremy Colson’s drums to clean up all the highly reflective chrome on the drum kit. Quite a few shots featured lots of motion blur from the band as well, but the nodes in Fusion allowed us to copy polygon masks and effects from one shot to another to save time.”  www.blackmagicdesign.com 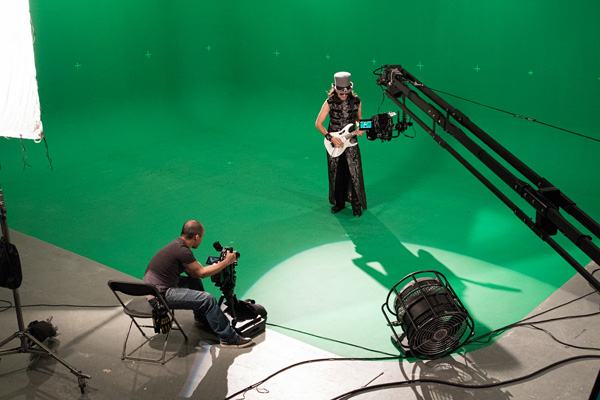